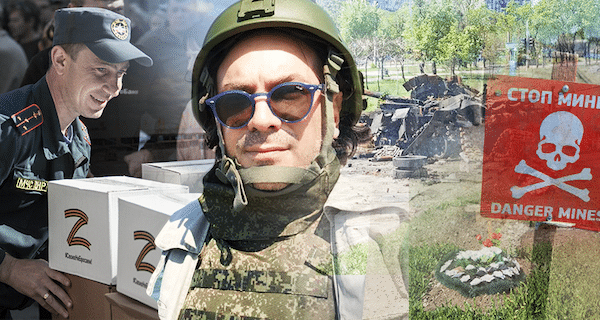 We gather around the school in Mariupol. All windows without exception are broken. The rooms inside are fully demolished. The Ukrainian have used the school and its surrounding as defense position. At 09:00 in the morning, humanitarian aid will be distributed. We start talking with Mariupol’s locals.

‘The Azov Battalions have bombarded our house’

The biggest and most urgent problem is housing. A great number of houses and building are in a shape they cannot even be accessed. The Azov Battalions have occupied the houses, forced part of the inhabitants to leave and go to the cellars, while keeping others in the flats on purpose. They have placed weapons into civilian flats–in clear violence of international law of warfare. On the rooftops, they have placed snipers.

The local population says that the Azov Battalions have starting bombing some of the buildings even before the Russian arrived. A woman points with her fingers her own flat. “My mothers ashes are still there. The Russian were not around yet back then, it was March 10, and they bombarded our house.”

An old woman tells what happened to her:

“On the very first day of the squirmishes, the Azov have occupied my backyard and placed weapons there. We have become homeless. We lived in an elevator. It was a building with 9 floors, they broke the doors of each apartment and have entered them all. My neighbor had a door made of steel. They used a hand grenade to blow up the door.”

Revenge for the 2014 referendum

“For me, Ukraine as a state is over. I am a citizen of the Ukraine, but for the, that state has ceased to exist.” These are words frequently heard in the streets of Mariupol. A lot of them have not been informed about the humanitarian corridors opened during the clashes. The Azov Battalions stopped those who heard about these corridors and wanted the escape clashes.

There is a specific reason, why the Azov Battalions hate the inhabitants of Mariupol. In 2014, following the Maidan events, Donetsk declared independence and a referendum was also held in Mariupol. The city back then decided in majority to join the Donetsk People’s Republic. But the forces from Donetsk were not able to hold the city and Mariupol returned back to Ukrainian control.

An older man points to the city lying in ruins and says: “They now wanted to take revenge for that from us”, describing how badly the Azov Battalion treated the population.

We are speaking to a young couple. They tell us that, during clashes, the Azovs have not established any communication with the population, have not helped the inhabitants at all. The Russian soldiers on the other side were all the time helping the population, they tell. 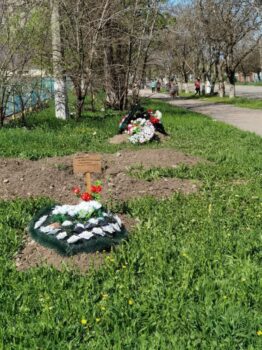 A grave in the park: authorities say these temporary graves will soon be transferred to graveyards.

Graves by the roadside

Another important problem in the city is communication. Cell phones or normal lines are not working at all. The people are not able to establish any communication with their relatives who had left city before. Gas, electricity and water supply has also stopped. Mounting waste is another issue. It said that, once the heat increases, this may turn into a serious problem.

Burying the dead causes another pain. A woman that came to the school complains that the remains of her mother are in her backyard since days. Officials promise her to solve the problem. There are even improvised and temporary graveyards by the roadside–for some the only solution right now. We are told that these graves will be transferred later on.

Transition to Rubles has begun

Once it has lost Mariupol, the Ukrainian side also stopped paying and transferring the pensions. Therefore, the city suffers a lack of cash money. It seems that slowly, the Ruble is going to replace the Grivna. The according infrastructure is being prepared currently.

In spite of all the problems: with the end of clashes, people have started to return to Mariupol. Others we have spoken to said, with tears in their eyes: “This is our home, we will not leave what ever happens.” 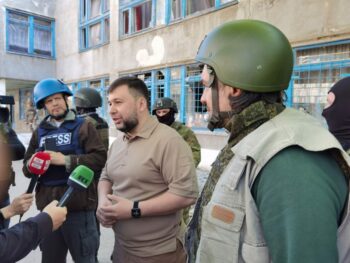 “Keeping on till the territorial integrity is achieved”

When the humanitarian aid’s distribution begins, the leader of the Donetsk People’s Republic, Denis Pushilin comes to the school. He has no helmet or body armor, but he carries a pistol on his belly. Pushilin says:

The Azov Battalions have tried to turn Mariupol into a heroic city in their perspective, they tried to turn the city into a symbol. But it did not work out. They have committed lots of war crimes, which we are all documenting. The population of Mariupol has been under strong pressure during the last 8 years, before the military operation.

Now, we are facing new tasks that cannot be delayed. We will reconstruct Mariupol and solve the problem of infrastructure. As a first step, we have cleaned the mines in the city. 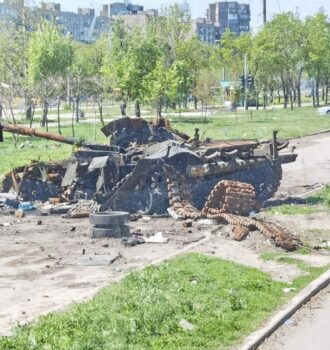 Ukraine is by the way attacking also areas where there are no military units. We will continue our work until the territorial integrity of Donetsk is achieved. Our goal is to eliminate the maximum number of enemies while minimizing the civilian casualties.”

There is also mosque in Mariupol. The Azov Brigades have held more than 150 Turkish people hostage there, which were liberated by Russian Special Forces upon President Erdoğan’s request. We cannot visit the mosque because it is located in a different part of the city.

We are leaving the city center of Mariupol. Our next stop is another spot of intense clashes: the harbor of Mariupol. We are taking quite a detour in order not to get too close to current Ukrainian positions. 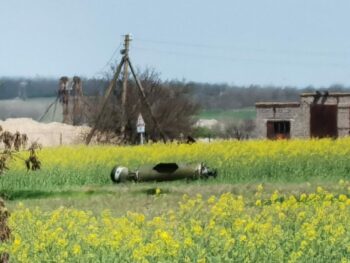 We see lots of civilian cars on the road, almost half of them has the windows broken. A hand-written paper note sticks on some cars, saying “Children inside”. On the road we also observe lots of destroyed Ukrainian armored vehicles and missile parts. Several Russian check-points provide security.

The Hitler portrait found in the headquarters

The road is quite long, and not to waste time, we immediately begin the asking and talking. Mariupol was one of the main centers of the Azov Battalion, we are told. All its members, without exception, were educated with Nazi ideology. The Russian have discovered recently the Azov’s secret headquarters in Mariupol. An official shows photo he has taken there. From Hitler portraits to Nazi symbols … all kinds of decoration representing fascist ideology was there.

I suddenly remember the famous Soviet documentary ‘Ordinary Fascism’ from 1965. 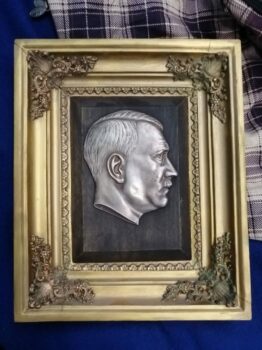 Hitler portrait and symbols found in the Azov Battalion’s headquarters.

Though I had hears a lot about these Azovs, the posters on their walls are still shocking. The walls are full of slogans and posters of hatred against the Russian state, against the Kremlin, against basically everything that is Russian, and claiming to eliminate all of that from the earth. There is even a book with the title: ‘Hitler: a Democrat’.

Drugs in the Ukrainian army

Some videos filmed by the Azovs themselves were also captured. They show ceremonies originating from medieval times. They gather around the totems placed in a garden, cut their arms and let blood flood into the earth, while collectively swearing in. I tell to myself that this ceremony is probably impossible to stand without using drugs. And I am confirmed that drug use was very common in the Azov Battalion and the Ukrainian army. We are shown the testimony of a Ukrainian captive: He says that, upon command from the high-level officers, drugs were distributed called “pain-killers” among soldiers.

No difference left between the Ukrainian military and the Azov Battalion

Then I ask: “Is there no difference between the Ukrainian army and the Azov Battalion? He army is coming from the Soviet tradition, and although the enemy, they still have a military tradition and culture, don’t they?” I receive the following answer:

“We try to lay emphasize on this in the very beginning. We told to the Ukrainian army: ‘You are true soldiers, come and lets talk’.” They have tried to support them in a way. I also remember elements in Putin’s operation announcing speech, which were directed at the Ukrainian Military’s command. 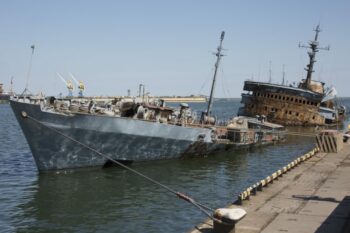 Commercial vessel taken as hostage and shield by the Azovs.

But it soon became obvious that there was no difference left between the Ukrainian military and the Azov Battalions. A very serious purge had taken place within the army, in which the NATO took part with its full force and influence. Neo-fascism, already the official ideology of the Kyiv Regime, has taken over the army as well.

Meanwhile, there is also a certain criticism among Russian officials against Khrushchev in that context. He leaves the Crimea to Ukraine. But more over, it was him who provided amnesty and released the Baderistas, who in the Second World War had collaborated with Hitler Germany. There is the thought that Khrushchev had his part in things getting where they are today. Let us remind that the Soviet leader was of Ukrainian origin.

The ships taken hostage in the port of Mariupol.

And we finally arrive at the harbor of Mariupol. The intensity of the clashes is visible at the very first glance. The port is like a ghost town. We see mines at the port entrance that have not exploded yet. The same tactics as in the city center or the Azovstal was applied in the harbor too. The Azovs have not permitted the exit of the civilian commercial vessels and instead, have deployed mines into the sea around the harbor. This time, they have used ships as civilian shields. The crews were meanwhile not permitted to leave ship and go on land. 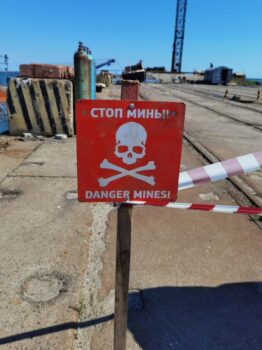 The port was the last part of Mariupol that the Russian forces gained control over. The activities of sweeping mines at the sea and land are still continuing. We are witnessing them personally. The responsible official from the Donetsk People’s Republic provides information about the work going on. He says that until now, more than 10 thousand explosives have been secured in the territories of Donetsk liberated from the control of Ukrainian forces.

One can see from the port the Azovstal. Artillery and shelling is heard again, followed by dark smoke rising.

In Moscow the NATO expansion, in Donetsk the danger of fascism

We are heading towards Donetsk to spend the night. This is the main message that the people of Donetsk tell us: “The war here has not started yesterday. It has been going on in the last 8 years. Kyiv has never fulfilled the Minsk Agreements. The West has never said a word to them. We are humans too, we deserve to have a life too! The Russian military operation is a result of this process, not the beginning of a war. Quite the opposite: This operation will put an end to a 8-year-war.

And truly: from the hotel that we stay at that night, we hear the sound of the missile attacks to neighborhoods of Donetsk. Next morning we learn that some civilians have lost their lives.

In Moscow, the Ukraine crisis is discussed in the framework of the NATO enlargement and U.S. aggression. In Donetsk, the context is the Kyiv Regime and the danger of fascism.

Mehmet Perinçek is a Historian and political scientist. (Turkey)