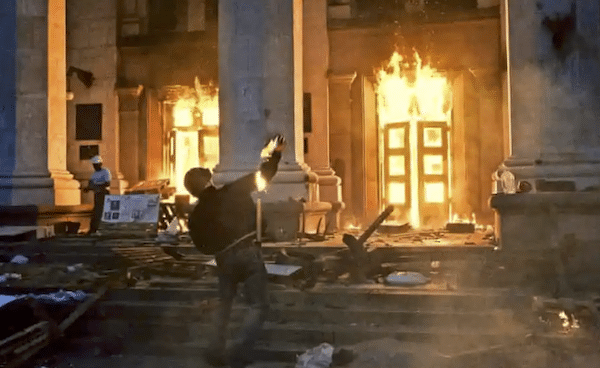 Burning of Odessa’s House of Trade Unions Building on May 2, 2014. [Source: theguardian.com]

On May 2, 2014, at least 48 people were killed when right-wing Ukrainian forces burned down the Trade Unions Building in Odessa. The victims had taken refuge in the building after opposing the February 2014 coup d’etat in Ukraine that was backed by the U.S. State Department.

Alexey spoke movingly about his friend and comrade, Andrey Brezevsky, who was beaten to death by neo-Nazi thugs with a metal bar after he jumped out of the Trade Unions Building to escape the fire.

Brezevsky’s mother, after her son’s death, lost her teaching position at a local university after being denounced by right-wing groups.

Alexey emphasized that none of the perpetrators of the Odessa massacre was ever punished. In the aftermath of the atrocity, neo-Nazi groups mocked and persecuted the relatives of the victims, like Alexey’s mother. 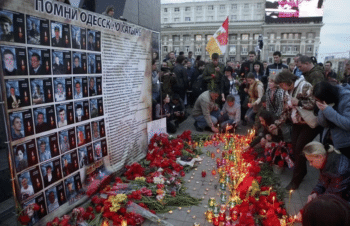 The once bright city became “gloomy and sad,” Alexey said. The massacre had not happened by accident, but was a “planned act of intimidation” by Ukraine’s post-coup government. It was “designed to intimidate the opposition [and] was an act of political terrorism perpetrated by the Ukrainian state targeting unarmed civilians [the victims in the fire were all unarmed].”

Alexey believes that the power of the Nazis will soon come to an end in Ukraine. He said that now “they are dying every day. The Russians are destroying these murderers, and rapists and justice will prevail. The people guilty of the Odessa trade union massacre will finally be brought to justice.”

Leonid Ilderkin, a Ukrainian communist in exile and member of the coordination council of the Union of Political Refugees and Political Prisoners of Ukraine, followed Alexey, stating that Ukraine has become a “human rights disaster” following the 2014 Maidan coup. 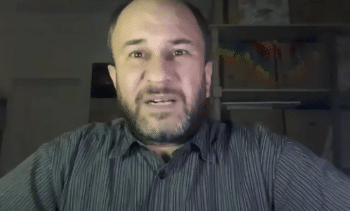 Since that time, the Ukrainian government under Petro Poroshenko and Volodymyr Zelensky have tried to demolish all types of political opposition and to hunt down everyone who does not like them.

The CIA, it should be noted, has assisted in these latter operations and helped to produce blacklists that are used to pinpoint dissidents for arrest.

Ilderkin said that he was a witness to the protests in Maidan Square which began in November 2013, and saw the kinds of groups that were supporting them.

The unrest led not only to the coup ousting pro-Russian leader Viktor Yanukovych but the resurrection of Nazi ideals in the country, resulting in this situation where anyone who is progressive and on the left of the political spectrum is being hunted down. 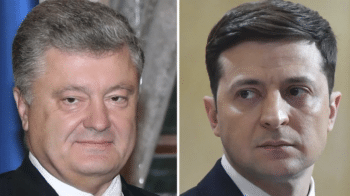 According to Ilderkin, the Odessa massacre followed a pattern of state repression that was also exemplified by the crushing of demonstrations after the 2014 coup in Mariupol, Odessa and Zaporizhzhia, where the people almost took back control from the central government.

On May 9, 2014, seven days after the burning of the Odessa Trade Unions Building, an unknown number of unarmed demonstrators were shot and killed by state security forces and neo-Nazi militias in a massacre that was never reported on in the West.

The resistance to the new regime, Ilderkin said, was more successful in Donetsk and Luhansk, where armed struggle developed. 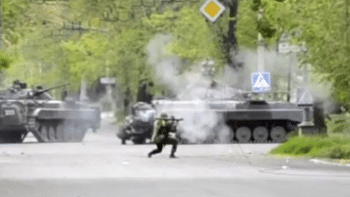 Kyiv army bringing in tanks and shooting at civilians in Mariupol on May 9, 2014. [Photo: rt.com]

Which Side Are You On?

Besides fueling state repression and civil conflict, the disastrous 2014 coup, according to Ilderkin, brought in leaders—Poroshenko and Zelensky—who have demolished workers’ rights and accelerated Ukraine’s deindustrialization.

Far from being a beacon of democracy as is presented in the U.S. and Western media, Ukraine is a police state where people considered disloyal to the regime are arrested and then vanish—no one knows where they are taken. The Azov Battalion is only one of many group of Nazi regiments which constitute the core of the Ukrainian army.

Ilderkin compared the Ukrainian army today to the morally bankrupt armies that fought with U.S. forces under the puppet Lon Nol regime in Cambodia and Thieu-Ky governments in South Vietnam during the Indochina War. 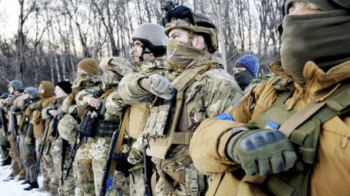 Ilderkin asked audience members: Who are you going to support: the South Vietnamese or Ho Chi Minh in North Vietnam?

Zelensky, he said, is like Lon Nol—who courted Western intervention that destroyed his country. Another similarity is to General Francisco Franco and the Fascist forces in Spain during the Spanish Civil War.

Ilderkin ended his talk by asking the audience: Which side are you on?

Indeed, which side are you on?