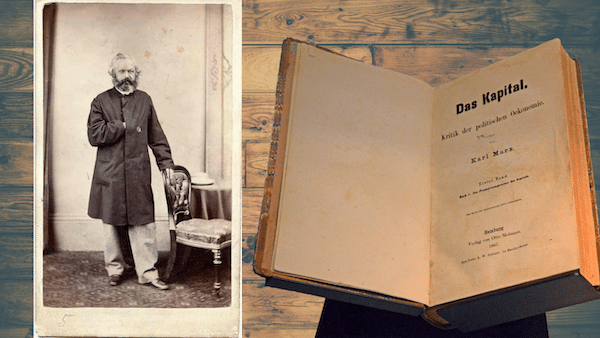 I was asked by a few comrades to explain Marx’s concept of the fetishism of commodities, and with that, the main ways it has been misunderstood by both mainstream bourgeois academia and by well-meaning Marxists. The following short reflection attempts to do just that.
​
Marx begins section four of the first chapter of Capital by saying that “a commodity appears, at first sight, a very trivial thing;” however, “its analysis shows that it is, in reality, a very queer thing, abounding in metaphysical subtleties and theological niceties” (Marx, 71). I can imagine ‘bourgeois’ political economists reading this in 1867 wondering what the hell is ‘queer’ about a commodity? I can envision them asking “what in the world does a commodity, a category of political economy, have to do with metaphysics and theology?” Before I analyze what Marx means, let us look at some of the things he doesn’t mean, but which, as usual, people think he does.

There are a few ways the commodity fetish is misunderstood, but the most prominent misunderstanding describes the fetishism of commodities as a sort of ‘false consciousness’ which takes us over when we engage in the market; a sort of ‘illusion’ that occurs when we idealize the products we consume, or the products we are faced with the opportunity to consume. The commodity fetish is understood here as a sort of libidinal connection to products. It is as if one could watch Confessions of a Shopaholic and retrieve the same message Marx is proposing in this section.

This is not, in my view, what Marx means by the fetishism of commodities. It is not an illusion which functions as a filter to distort our view of the world. If that were the case, as Michael Heinrich notes, “false consciousness must disappear once the real conditions have been explained” (Heinrich, 71).  This is not, however, the case. We don’t become immune to the ‘false consciousness’ of the commodity fetish after reading Marx’s Capital. Instead of thinking of the commodity fetish as a subjective experience of ‘false consciousness,’ Marx holds the fetish is in the world itself. It has an objective presence in the social relations of capitalist commodity production.

Marx uses the example of the construction of a table. When wood is formed into a table, there is no mystery present. We have a “common, every-day thing” (Marx, 71). However, “so soon as it steps forth as a commodity, it is changed into something transcendent” (Ibid–my italic). Notice here how he is very explicit that it is the object itself that is changed into something transcendent when it becomes a commodity. It isn’t, again, simply a matter of a mental illusion or false consciousness.

“The mystical character of a commodity,” Marx will go on to say, “does not originate, therefore, in their use-value” (Ibid). If it was simply a result of the use value of the good, all things–regardless of whether they were commodities or not–would have ‘metaphysical subtleties and theological niceties.’ Instead, what makes a commodity such a queer thing is the relation which makes a good into a commodity in the first place– its exchangeability. It is here where a good becomes a sinnlich übersinnliches ding (sensuous extrasensory thing). As Marx says: “whence, then, arises the enigmatic character of the product of labour, so soon as it assumes the form of commodities? Clearly from this form itself” (Ibid, 71-2).

For a good to carry an ‘exchange value’ means that the specific type of concrete labor and materials which were necessary to create that good have fallen to the background. What matters in exchange value is not the type of work, but the socially necessary time it takes for that work to produce its product. In essence, qualitatively different forms of work, producing objects with qualitatively different utilities, are all homogenized and differentiated only quantitatively, that is, by the amount of socially necessary labor time materialized in the work. The homogenization of the human element of the commodity creates the conditions where “the social relations of the producers… and the social character of their labour” takes “the form of a social relation between products” (Ibid, 72). The human source of the commodity disappears, it becomes absorbed and metamorphized into the thing itself, appearing “as an objective character stamped upon the product” (Ibid). In the commodity a “definite social relation between men” assumes “the fantastic form of a relation between things” (Ibid).

A good analogy to such a queer relation can be found in the religious fetish, wherein human creations (the Gods) are disconnected (in their being and in their qualities) from their human creators. The relationships are seen not as relations between human constructions, but relations between “independent beings endowed with life” (Ibid). A prominent example of this phenomenon can be seen in the religious alienation Ludwig Feuerbach depicts in The Essence of Christianity. Nonetheless, the point is that because this fetishism “attaches itself” to the “products of labor, so soon as they are produced as commodities,” in a system of commodity production, this fetish has an objective character (Ibid).

For instance, in the movie ‘They Live,’ the protagonist John Nada finds a box of glasses which when worn show the real message behind social symbols (e.g., advertisement for vacation reads ‘reproduce and consume,’ the dollar reads ‘this is your God,’ etc.). In his reaction to the film, Slavoj Žižek’s The Perverts Guide to Ideology provides a helpful analysis of these “ideology critique glasses,” which aids our understanding of how the commodity fetish has been misunderstood. Ideology, Žižek states, is usually thought of as a set of glasses distorting our view of the real world. Therefore, ideology critique is usually framed as the removal of these glasses, an act which allows a spontaneous and direct engagement with the real world. Similarly, the central misunderstanding of the commodity fetish is that it is merely an illusion we hold, once we remove the illusion from our understanding the fetish disappears. This way of thinking about ideology critique is, as Žižek notes, ideological as well.

Instead, as the movie rightly depicts, ideology is objectively in the world. The task of critique is beyond the commonsensical and spontaneous. Critique is an often-painful addition which mediates between us and the world in such a manner that provides us with insights into the objective limitations of the objective world. The commodity fetish is not a distorted view of the world. It is not ‘fixed’ through easy liberal consumptive practices; through knowing where your cow died and where your eggs came from. The commodity fetish is an objective reality in a world dominated by commodity production. It takes critique to see this, but a revolution to change it.

Note* I’d also highly recommend reading Thomas RIggins’ article on the same topic, included as an afterward to his recent book,Reading the Classical Texts of Marxism, published by the Midwestern Marx Publishing Press.

​​Carlos L. Garrido is a Cuban American PhD student and instructor in philosophy at Southern Illinois University, Carbondale (with an M.A. in philosophy from the same institution). His research focuses include Marxism, Hegel, and early 19th century American socialism. His academic work has appeared in Critical Sociolog y, The Journal of American Socialist Studies, and Peace, Land, and Bread. Along with various editors from The Journal of American Socialist Studies, Carlos is currently working on a serial anthology of American socialism. His popular theoretical and political work has appeared in Monthly Review Online, CovertAction Magazine, The International Magazine, The Marx-Engels Institute of Peru, Countercurrents, Janata Weekly, Hampton Institute, Orinoco Tribune, Workers Today, Delinking, Electronicanarchy, Friends of Socialist China, Associazione Svizerra-Cuba, Arkansas Worker, Intervención y Coyuntura, and in Midwestern Marx, which he co-founded and where he serves as an editorial board member. As a political analyst with a focus on Latin America (esp. Cuba) he has been interviewed by Russia Today and has appeared in dozens of radio interviews in the U.S. and around the world.