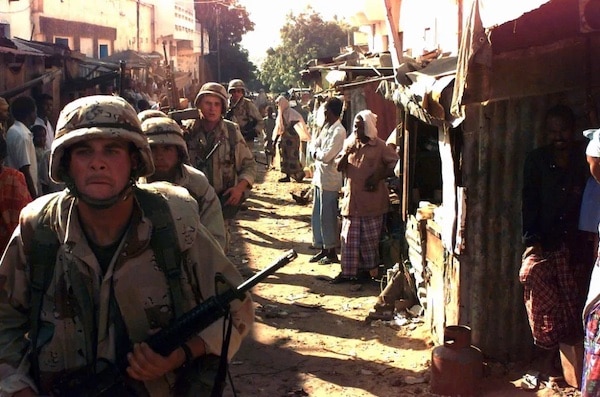 Biden has reversed Donald Trump’s withdrawal of U.S. forces from Somalia and will redeploy Special Operations Forces. It is just the latest move in a long history of destructive U.S.-UK meddling in the Horn of Africa.

Almost as soon as the administration of President Joseph Biden announced a redeployment of U.S. Special Operations Forces to Somalia on May 16, the Western media began to spin the intervention.

As the BBC framed it, Biden’s deployment would “support the fight against militant group al-Shabab” (sic). The intervention coincides with the re-election of former Somalian President Hassan Sheikh Mohamud, who governed between 2012 and ‘17.

Similarly, the New York Times (NYT) reported that “Biden has approved a Pentagon request for standing authority to target about a dozen suspected leaders of Al Shabab, the Somali terrorist group that is affiliated with Al Qaeda.”

But are these motives true? Does Washington really want merely to defeat al-Shabab? Is al-Shabab actually linked to al-Qaeda and, if so, to what degree? As usual, the mainstream state-corporate media reportage is missing context and reference to international law.

As we shall see, the context behind the U.S. redeployment is naked imperialism using counterterrorism as the latest in a long line of excuses to interfere in the politics of the strategically-significant country on the Horn of Africa. In terms of international law, signatories of the UN Charter have legal responsibilities to gain authorization from the Security Council before launching military operations–something the Biden administration and its predecessors have never done in Somalia, or anywhere else, for that matter.

It is also worth tackling the Trump-era propaganda, which is double-edged. Trump supporters claimed that their hero ended America’s “forever wars,” as he “bombed the shit out of ISIS,” in his words, which often meant dumping munitions on Iraqi and Syrian women and children, while blowing Somalis to pieces via drone operators in numbers greater than during Obama’s term. It is accurate that Trump withdrew U.S. ground forces from Somalia, though it appears to have been both an America First PR stunt and a device to make things difficult for the incoming Biden administration.

On the other side, the pro-war, neoliberal, anti-Trump establishment sought to portray Trump’s withdrawal of ground troops as a sign of American weakness in the face of globalized “Islamic” terrorists. By demonizing Trump and inaccurately reporting the motives of his withdrawal, the NYT, BBC and company were essentially clamoring for U.S. militarism in Somalia: Trump bad so militarism good. And as usual, their reporting was absent of any critical or skeptical voices.

The real agenda: “acquire and maintain the capability to respond to any military contingency that could threaten U.S. interests”

Billionaire-backed, self-appointed “fact-checkers” like Snopes, PolitiFact often rate what they call “fake news” as having “missing context,” yet mainstream state-corporate media operate almost entirely on an unspoken doctrine of propaganda-by-omission. Researchers are left to piece together the kind of coherent recent-historical narratives that MSM refuse to provide. Somalia’s “missing context” can be summarized as follows:

In 1997, the U.S. Space Command (which is still operational, though its duties are largely second to the Space Force) committed the Pentagon to achieving “full spectrum dominance” of land, sea, air, and space by the year 2020, “to protect U.S. interests and investment,” which means elite corporate interests. Since then, numerous oil-rich and strategically-important nations have been occupied by the U.S. and its allies. Various Pentagon departments, including the Central Command and Africa Command, divide the world into self-appointed Areas of Responsibility, based on the given region and/or nation’s strategic relevance to the Pentagon. This follows Britain’s colonial model.

In the 1950s, the Colonial Office described Aden—the Gulf between Yemen and Somalia—as “an important base,” from which forces could rapidly deploy to the energy-rich Middle East. In those days, the so-called Scramble for Africa (which began in the late-19th century) was justified under the doctrine of the “white’s man burden”: the mission to civilize the backward black races, as their lands and resources were plundered.

But Somalia gained independence in 1960 before being governed by the one-time CIA-backed dictator Siad Barre, who ruled from 1969 to ‘91. At the time, U.S. support for Siad—including his killing of tens of thousands of political rivals—was justified as part of American Cold War policy.

With the Cold War over and Siad deposed, successive U.S. administrations tested new “interventionist” doctrines, the first post-Cold War ideology being humanitarian intervention. Operation Restore Hope was launched in 1992 by the outgoing George H.W. Bush administration, supposedly to provide humanitarian relief during the famine triggered by the civil war. But a Fort Leavenworth paper reveals a hidden agenda: “Throughout our involvement with Somalia, our overriding strategic objective was simply to acquire and maintain the capability to respond to any military contingency that could threaten U.S. interests in the Middle East, Northeast Africa and the Red Sea area.”

Under an umbrella of Islamic political parties, known as the Islamic Courts Union (ICU), most of them non-extremist, Somalia enjoyed a short period of peace, stability, and an increase in living standards. Branches of the UN, Amnesty International, and the British foreign policy think-tank Chatham House have acknowledged that the ICU prevented “piracy,” provided schooling for large numbers of children, and reduced malnutrition.

The U.S. and UK wage proxy war on the ICU, infiltrate the movement with Al Qaeda extremists

The attacks of 9/11 in 2001 provided the George W. Bush administration an excuse to sanction Somali banks, even though the 9/11 Commission cleared the banks of wrongdoing. Since then, Somalia has become a testing ground for the imposition of cashless societies.

Convinced that the more right-wing elements of the ICU were “al-Qaeda” fronts, the Joint Special Operations Command and CIA operated covertly in Somalia. Failing to destroy the ICU from within, the U.S. and Britain backed an opposition government in exile comprised of Ethiopian and other warlords.

In December 2006, Ethiopia invaded Somalia as a U.S.-British proxy war. Hundreds of thousands of Somalis fled to neighboring Kenyan and Ethiopian refugee camps, while others made the perilous journey in rickety boats to Yemen. The so-called Transitional Federal Government was comprised of killers and torturers funded by the British taxpayer and given homes and citizenship in the UK. The war reversed the ICU’s social achievements and thousands starved in successive famines.

The frightening-sounding al-Shabab simply means “the Youth,” and was the young persons’ wing of the ICU. In 2007, with the non-violent ICU destroyed by a campaign of U.S.-British terror, al-Shabab turned to violence to defend its country against Ethiopian aggressors and Somali collaborators. British intelligence agencies saw their chance to infiltrate al-Shabab with terrorists and transform it from a nationalist militia into an extremist group that could then be used as pretext for more Western aggression against Somalia. And indeed, some of the high-profile terrorists operating in Somalia post-9/11 were U.S.-British intelligence assets.

It is well-known that the British and American militaries helped fuel the rise of what was later known as “al-Qaeda” to battle the Soviets in 1980s’ Afghanistan. One Afghanistan-based terror cell at the time was a Somali group called Al-Itihaad al-Islamiya, whose leader Ahmed Abdi Godane went on to lead al-Shabab after the ICU collapsed. In London, an MI5 double agent tasked with spying on mosques tried in vain to alert his handlers to the fact that Osama Bin Laden’s main UK connection, Abu Qatada, was training and sending fighters to half a dozen Muslim-majority countries, including Somalia. TIME had reported that Qatada was an asset of MI5.

In 2010, with war still raging, U.S. President Obama signed Executive Order 13536, describing Somalia–a country nearly 8,000 miles away with a GDP of less than $5 billion–as an “extraordinary threat to the national security and foreign policy of the United States.” As you wipe tears of laughter away, notice the emphasis on “foreign policy”: non-compliant regimes in Somalia might threaten total U.S. operational freedom along the Red Sea and Gulf of Aden.

That year, the radicalized and infiltrated al-Shabab launched its first foreign attacks (in Uganda and later Kenya), prompting regional governments to join the U.S. in “counterterrorism” operations. A year later, drone strikes against “al-Shabab” and other groups began, killing at least 300 people by 2017; tragedies small in comparison to the hundreds of thousands who died in multiple, human-made famines over the last decade.

In 2011, the group allegedly pledged allegiance to “al-Qaeda.” The 2012 election of Hassan Sheikh Mohamud provided the U.S. with a client who was described by Obama’s National Security Council spokesperson, Caitlin Hayden, as committed to “strengthen[ing Somalia’s] democratic institutions and promot[ing] economic development.”

By 2016, Bush and Obama had launched a total of 41 confirmed strikes largely from the U.S. base at Camp Lemonier in neighboring Djibouti. The Shabab leader, Godane, was killed in one such strike. His replacement is supposedly named Ahmad Umar, and is a shadowy bogeyman about whom little is known.   By 2020, Trump alone had launched 40 drone strikes against Somalia, eliminating AFRICOM’s accountability protocols.

Exploiting “playgrounds for a new scramble in the Horn of Africa”

We cannot say that corporate-state media do not do their job. They have successfully kept the public ignorant and deluded on virtually every geopolitical issue of significance. Nor can we say that the “war on terror” has failed (i.e., that after 20 years terror groups still operate), because it is not designed to combat terrorism. It is designed to produce an endless cycle of tit-for-tat killings and to create extremist groups where none previously existed. Permanent counterterrorism is a thin smokescreen to justify “full spectrum dominance” to the voting and taxpaying American public whose purse is plundered to fund these wars.

As we see from recent history, professed justifications for bloody U.S. interference in impoverished Somalia shift according to the political climate: countering the Soviets until the collapse of the USSR in 1991, preventing famine under the guise of 1990s’ humanitarian intervention, stopping “pirates” as European ships plunder the starving country’s fish stocks, and, for the last two decades, fighting endless hordes of post-9/11 terrorists; many of them incubated in London by protected intelligence assets.

Britain’s Ministry of Defence recently announced that 70 personnel are training 1,000 Somalis as part of the African Union’s so-called Transition Mission in Somalia, “protecting civilians from Al Shabaab and other terrorist groups.” A more plausible reason for the ongoing U.S.-British involvement is offered by a policy paper published last year by the European University: “Strategic areas of the western shore and the Horn of Africa are being incorporated in the Red Sea geopolitical map and Sudan, Djibouti, Somalia and Eritrea have become playgrounds for a new scramble in the Horn of Africa.”

As excuses change, the geographies of power remain the same. These strategic interests are the real motivations for war. Ordinary people, as always, pay the price.

T.J. Coles is a postdoctoral researcher at Plymouth University’s Cognition Institute and the author of several books, the latest being We’ll Tell You What to Think: Wikipedia, Propaganda and the Making of Liberal Consensus.