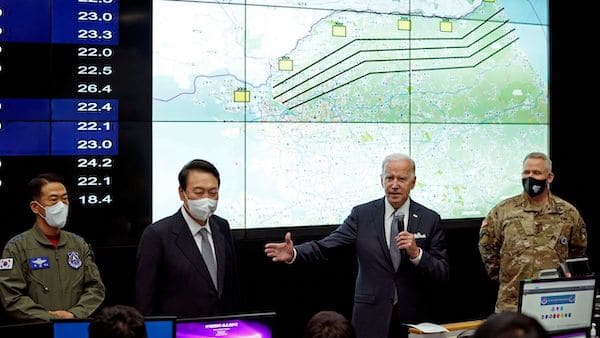 Even as his administration is ramping up its proxy war with Russia in Ukraine, President Biden is on his first visit to Asia, colluding with major allies and strategic partners to step up the U.S.-led confrontation with China, to economically weaken it and prepare for war.

Biden’s trip to South Korea and Japan—U.S. imperialism’s chief military allies in East Asia—will culminate in a meeting tomorrow of the leaders of the Quadrilateral Security Dialogue, a strategic grouping directed against China that includes the U.S., Japan, Australia and India.

Immediately prior to departing for South Korea, Biden met with Finnish and Swedish leaders at the White House to discuss their bids to join NATO to strengthen the alliance against Russia. In Seoul on Saturday, he signed off on the $40 billion military aid package for Ukraine with the aim of enmeshing and weakening Russia through a protracted war.

From the outset of the Ukraine war, the Biden administration has made not the slightest pretense of enlisting Beijing as a mediator in negotiations to end the conflict. Rather, Washington has denounced China for refusing to condemn the Russian invasion, threatened economic sanctions, and accused Beijing, without a shred of evidence, of preparing to invade Taiwan.

The New York Times claimed that the purpose of Biden’s trip was “to demonstrate that the United States remained focused on countering China, even as his administration stage-managed a war against Russia in Europe.” There is nothing defensive, however, about the escalating U.S. military build-up and associated demonisation of Beijing.

Biden’s talks with newly-elected South Korean President Yoon Suk-yeol underscored the purpose of the trip as a whole—to restart major joint military exercises, boost South Korea’s military capabilities and consolidate key supply chains, such as semiconductors, to restrict any economic reliance on China in the event of conflict.

Both South Korea and Japan are longstanding U.S. military allies and house vital American bases that are integral to the Pentagon war planning. While the supposed North Korean threat is the pretext, the consolidation and boosting of these alliances is directed against China. The two countries house U.S. anti-ballistic missile systems that are a key element in U.S. strategic preparations for a nuclear war. Significantly, discussions are underway in both countries about the stationing of U.S. medium-range nuclear missiles on their territories.

Employing the language of war, a senior U.S. defense official told the Defense One website last week that Biden’s trip was “proof positive” that the U.S. could maintain both fronts in Europe and Asia. “Everybody’s focused on Ukraine, and we understand that, but that doesn’t mean that we’ve stopped working with allies and partners in the Indo-Pacific, doesn’t mean we stopped our air and naval activity in the Indo-Pacific,” the official said.

The U.S. has continued its naval provocations in the South China Sea under the guise of “freedom of navigation” and as recently as May 10 sent a warship through the narrow strait between Taiwan and the Chinese mainland.

The Biden administration’s focus on Taiwan in discussions in Asia is particularly sinister. In the same way that it goaded Moscow into a war in Ukraine as a means of bogging down the Russian military in a protracted conflict, the U.S. is seeking to exploit Taiwan as a potential quagmire for the Chinese armed forces.

Taking up where Trump left off, Biden has provocatively undermined the longstanding One China policy, under which the U.S. de facto recognises the Chinese Communist Party regime in Beijing as the legitimate government of all of China, including Taiwan. When formal diplomatic relations were established with China in 1979, the U.S. cut diplomatic ties with Taipei, downgraded contracts and removed all military forces from the island.

Over the past year, Biden has dropped the previous barriers to top level meetings, acknowledged that U.S. military “trainers” are stationed in Taiwan, and increased U.S. naval activities through the Taiwan Strait and neighbouring waters. When China responded by increasing its air activity near Taiwan, Washington accused China of preparing to invade.

Indeed, the U.S. is consciously arming Taiwan for a war of attrition against any Chinese invasion, insisting that it buy weapons for asymmetric warfare against a much larger Chinese military. Chairman of the Joint Chiefs of Staff Gen. Mark Milley told a congressional hearing in April that Taiwan could draw an important lesson from Ukraine as a “nation in arms.”

“If your opponent tries to invade you, and every military age man [and] woman is armed, and they have a little bit of training, that can be a very effective use,” Milley said. And, one should add, especially if they are armed to the teeth with billions of dollars of sophisticated American weaponry and supplemented by crippling economic and financial sanctions.

Charles Edel, a senior analyst at the Center for Strategic and International Studies, told the House Foreign Affairs Committee on Thursday that the U.S. strategy in the Ukraine war provided a good “template” the administration can build on when thinking about how to protect Taiwan from a potential Chinese invasion.

In reality, the U.S. is not considering how to defend Taiwan but how to use the people of Taiwan as cannon fodder in a war with China.

Biden’s trip to Asia underscores the fact that U.S. imperialism is recklessly pursuing a strategy aimed at securing control of the strategic Eurasian landmass and its resources and preventing any challenge to its global hegemony by Russia or China, which the U.S. regards as its chief threats. In its historic decline, Washington is driven to resort to military means to shore up its dominance.

For more than a decade, starting with President Obama’s “Pivot to Asia,” the U.S. has sought to undermine and encircle China diplomatically, economically and militarily. Now engulfed in an unprecedented social and economic crisis at home and the re-emergence of class struggles, the Biden administration has plunged Europe into war and is preparing the same in Asia, threatening the world with a clash of nuclear-armed powers.

Acutely conscious of what is looming, General Mark Milley warned cadets graduating from the U.S. Military Academy West Point on Saturday to be prepared for world war. “The world you are being commissioned into has the potential for a significant international conflict between great powers. And that potential is increasing, not decreasing,” he said.

A U.S. war with China would be a disaster for the working class in Asia and internationally. The only means for halting this headlong rush towards a catastrophic nuclear war is a unified struggle of workers in China, the U.S. and around the world on the basis of an internationalist and socialist perspective against the capitalist system that is the root cause of war.