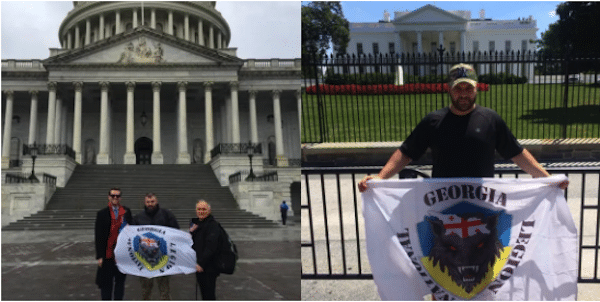 Russian President Vladimir Putin has made a goal of his war in Ukraine the ‘denazification’ of the country. Kremlin propagandists often refer to the Maidan regime as a ‘Nazi junta’ and fascist regime. These are clearly exaggerations. But there is something more absurd marauding minds in the West. Ukraine neofascist apologists both in Ukraine and elsewhere, such as–astonishingly–the ADL, often downplay Ukrainian neofascism, arguing Ukraine has neofascists ‘like any country’ but their influence is ‘marginal’ and Ukraine’s neofascists are not anti-semitic. Ukraine has a Jewish president after all (www.informationliberation.com/?id=62981). The claim that Ukrainian neofascists have little influence is usually backed up by the neofascist parties’ poor showing in Ukrainian elections. But anti-semitism is not an obligatory characteristic of fascism, and neofascist influence is not measured by the number of seats in a parliament.

Regarding the supposed ‘marginal’ influence of Ukrainian neofascism and ultranationalism, it is never noted that there are so many competing and often mutually antagonistic neofascist groups and parties that their political work and votes are split and so there candidates and parties often fail to win executive branch offices or win seats in legislatures. In addition, neofascist and ultranationalist parties do not devote the bulk of the energies to politicking. They are more interested in intimidation and violence as the means to carry out politics than in persuasion and compromise. Moreover, more ‘mainstream’ nationalist and ultranationalist parties–themselves radical enough and often anti-Semitic–coopt neofascists onto their candidate lists, through which they take seats in Ukraine’s parliament of Rada. Moreover, their lust for power atomizes neofascists and ultranationalists into numerous small groups in Ukraine, making it difficult to repeat the neofascist Svoboda party’s successes of a decade ago.

Neofascists and ultranationalists in Ukraine, as everywhere else, are uninterested in parliamentary politics, debates, compromising and deal-making. They are more interested in the streets and other state institutions, mostly the siloviki. They enter parliament to have a platform, take bribes, and direct budget resources to where their groups might get their hands on them. Theirs is the realm of silencing all who disagree with or oppose them, intimidating marches, and violent riots, beatings, and killings, and ultimately coups–as occurred in February 2014, leading the semi-neofascist Maidan regime to power. On the more mundane level, neofascist demonstrations –sometimes quite violent–have blocked legislation, secured other legislation, and prevented Kiev’s fulfillment of the Minsk 2 accords, contributing to the march towards the present war (gordonhahn.com).

I know of no definition of fascism that stipulates anti-semitism is a necessary component of the ideology. Some sort of racism or ethno-national hatred is an essential part of any list of the components of fascism (along with totalitarian regime type and militarism). Nevertheless, the Ukrainian far right’s racism does target Jews but more episodically than during World War II. Jews are for now a secondary target, and Ukraine’s radical right usually tries to hide its anti-semitic ideas even in cases where they might express admiration for Adolf Hitler and the like. Ukrainian neofascists’, ultranationalists’ and even many ‘moderate’ nationalists’ present targets are Russians particularly but also Romas, Africans, and gays, who are characterized as subhuman by Ukrainian extremism’s adepts.

Indeed, it is arguable that Ukraine is unique as a country with pervasive neofascist and ultranationalist influence, yet mixed in with a hybrid democratic-soft authoritarian regime. The most important elements of everyday neofascism’s influence in Ukraine as a practical matter lie elsewhere than those places focused on by its apologists and defenders.

I know of no other country in the world whose regime was born illegitimately in the blood of its own citizens in a false flag operation carried out by allied neofascist elements in order to spark a revolution and then covered up the massacre’s true origins, organizers, and perpetrators for eight years (Ivan Katchanovski, www.academia.edu; Ivan Katchanovski, papers.ssrn.com; and gordonhahn.com). As one Ukrainian presidential candidate, former Orange regime Defense Minister Anatoliy Hrytsenko, noted: “I propose that one of the reasons that (the snipers massacre) has not been investigated to the end is that someone has feathers on their snout among those who are now in power” (gordonua.com).” Weeks later, another candidate, Volodomyr Zelenskiy commented: “People whom came to power on blood are profiting on blood” (www.pravda.com.ua/news/2019/02/26/7207718/)

I know of no other country in the world which has as its national heroes, figures such as Stepan Bandera and his organizations’ members (Organization of Ukrainian Nationalists and the Ukrainian Partisan Army), who murdered tens of thousands of Jews and Poles in World War II (gordonhahn.com).

I know of no other country in the world where neofascist groups can beat up officials, murder journalists, and raid courtrooms with impunity (see the above links).

I know of not other country in the world where the president awards medals to neofascist who openly acknowledge in Western media that they like killing Russians and routinely violate a ceasefire agreement (gordonhahn.com and gordonhahn.com).

I know of not other country in the world where the president must go to neofascist training camps and convince them to allow the government to fulfill ceasefire and peace agreements (www.kyivpost.com/ukraine-politics/im-not-a-loser-zelensky-clashes-with-veterans-over-donbas-disengagement.html and www.blackstoneintel.com).

I know of no other country in the world where neofascists hold government and police posts and the advisor to the country’s commander of its armed forces is a neofascist (www.mil.gov.ua and gordonhahn.com).

But Ukraine has help in being a unique country. The West rather than discouraging the spread of neofascist ideologies in the country has aided and abetted the trend. One report notes:

In July 2021, a group of journalists flew to Warsaw for media training after being exempted from coronavirus-related restrictions and quarantine orders by Poland’s top medical authorities. Among the six journalists were Andrey Lipsky, deputy editor-in-chief of Novaya Gazeta, and Yuliia Fediv, CEO of Hromadske TV media, one of the most-watched networks in Ukraine. Hromadske’s financial reports show it is funded by numerous governments and foundations, including the U.S. embassy in Ukraine, the Ministry of Foreign Affairs of Denmark, the Swedish International Development Cooperation Agency, the European Endowment for Democracy, and Free Press Unlimited. Silicon Valley billionaire Pierre Omidary was also involved in creating the outlet (www.mintpressnews.com).

Hromadske has hosted a commentator demanding genocide of ethnic Russians in the Donbass, claiming it is populated with 1.5 “superfluous” people that “must be exterminated.” (UkraineHumanRightsAbuses).

At the same time, it is well-known that U.S. and other NATO countries have been training neofascists, including but not limited to the Azov Battalion now incorporated into the Ukrainian armed forces (thegrayzone.com and twitter.com). It appears that the Georgian commander of the pro-Kiev Georgian Legion fighters, Mamuka Mamulashvili was backed and trained by the U.S. military. Mamuashvili has openly acknowledged his forces do not take Russian prisoners and may have participated along with his legion in the now infamous video in which legion and Ukrainian fighters finish off barely alive and severely wounded Russian soldiers.

It is perhaps indicative that Dmitro Yarosh–the founder of the neofascist organizaton ‘Right Sector’, head of the paramilitary Ukrainian Volunteer Army, and advisor to the chief of staff of the Ukrainian armed forces–attended the NATO summit at Rammstein Air Force Base to plan Ukraine’s response to Russia’s invasion (www.facebook.com).

Not surprisingly then, U.S. government-tied Facebook has supported ties to Ukrainian neofascists (zaborona.com), including allowing Yarosh to maintain a Facebook page.

Disturbingly, the war in Ukraine is likely to fuel even greater neofascism in Ukraine unless its adherents are largely wiped out in the present fighting, which is certainly possible if not likely. Putin’s ‘denazification’ is anything but a fait accompli, and in the trying the Russian invasion and resulting devastation may make matters worse.

At any rate, the next time a radio talk show host, political expert, Democrat Party-state regime, or even a pro-Jewish figure tells you neofascism in pre-war Ukraine is a phantom, not a factor, can be ignored–you shall know you are being lied to.