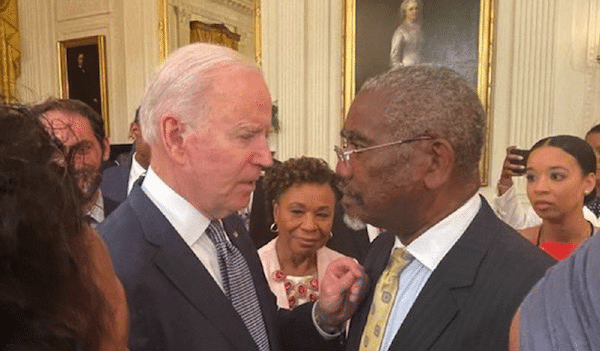 The Biden Administration’s recent decision to return  U.S. troops to Somalia represents another effort on the part of the U.S. to deny agency and independence to African people. On the 59th commemoration of African Liberation Day, the Black Alliance for Peace expresses its unequivocal opposition to this redeployment. The 500 U.S. troops sent to Somalia are the latest to violate that nation’s sovereignty. As is the case with all U.S. interventions, the underlying reasons are not only depraved but also indifferent to the constant suffering of African people caused by western-induced militarism and war.

The reintroduction of the U.S. military (AFRICOM) on the ground is related to a dispute between Somalia and the U.S. oil company, Coastline Exploration Ltd, over the validity of an oil exploration agreement. It is also a signal that the U.S. wants to both reassert its presence in the oil-rich and strategic region, and to directly target its long-time foe, Eritrea.

Netfa Freeman, BAP’s African Team Co-Coordinator states that this decision is “emblematic of the U.S. insistence on keeping Africa in perpetual turmoil and has nothing to do with enabling a more effective fight against al-Shabaab.” Biden’s advisors are certainly aware of various reports exposing that the billions Washington spends on counterterrorism programs, from Somalia to Nigeria, ostensibly to enhance security in Africa, is having the opposite effect.

While the U.S. continues its 30-year long series of interventions against Somalia, H.R. 7311 the “Countering Malign Russian Activities in Africa Act” passed with the unanimous approval of every Democrat in Congress.

H.R. 7311 was introduced by House Foreign Affairs Committee Chairman and Congressional Black Caucus (CBC) member Gregory Meeks and passed in the House on April 28, 2022. The bill calls for assessments of Russia’s influence on the African continent and states that the U.S. will “hold accountable” Russia and African governments who are “complicit in aiding such malign influence.” This is reminiscent of the era of the George W Bush administration that declared that any country not with the U.S. is against the U.S.

This bill is a racist affront to the right to self-determination of African people.

H.R. 7311 is a reaction to African nations that refrained from condemning Russia’s military operation in Ukraine; and as a deterrent against African nations acting as Mali has done, by ending the French military presence and turning toward Russian private military company Wagner for assistance. On May 16th the Mali government announced that Wagner played a role in thwarting a failed coup attempt allegedly carried out by a group of local soldiers, foreign mercenaries, and units from the North Atlantic Treaty Organization (NATO) member countries.

Rep. Meeks and the rest of the Congressional Black Caucus (CBC)–the “Black misleadership class”-are fully aligned with the Biden administration and Democratic Party leadership, defending every imperialist effort to exercise U.S. dominance in Africa. The U.S. bombed Somalia on February 22, two days before the Russian Federation began its military operations in Ukraine. Yet Somalia has not become a focus of concern of Meeks and the rest of the Black misleaders, despite years of constant drone bombings by the U.S. having caused an estimated 250,000 deaths and the displacement of 3 million people. Meanwhile, these same CBC members won’t address domestic problems, but will lob billions to wage a proxy war against Russia and to support Nazi groups in Ukraine. The U.S. Black misleadership class demonstrates over and over that they do not care about African people – neither on the continent nor at home.

BAP is firm in its anti-imperialist stance and again says,

U.S. Out of Africa! Shut Down AFRICOM!

No Compromise! No Retreat!