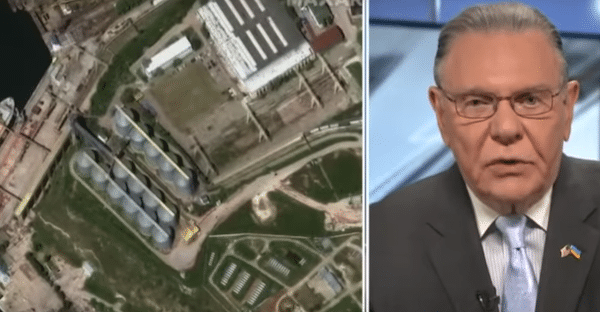 General Jack Keane calls for a “coalition of the willing”

The governments of the United States, the United Kingdom and other NATO members are preparing a major new stage of the U.S.-NATO war against Russia by using their warships to break the Russian blockade of Ukrainian ports, creating the conditions for a direct shooting war between NATO and Russian naval forces.

This massive escalation by the U.S. and NATO is being billed as a “coalition of the willing,” echoing the words used by the Bush administration to describe the 2003 invasion of Iraq.

Retired four-star General Jack Keane, chairman of the Institute for the Study of War and chairman of AM General, the maker of the Humvee military vehicle, called on Wednesday for the creation of an “international coalition of warships led by the United States” to secure control over the Black Sea.

“We… go to the port of Odessa and let the ships… pick up the grain that needs to be picked up and escort them out,” Keane told Fox News.

The other risk is the Russian Navy is there. They could see this as a provocation, and we could have a prospective confrontation.

He said it was “well within the risk profile to get this done.”

Keane developed the comments of Admiral James Stavridis, who earlier this month said that the Black Sea would be “the next major front in the Ukraine war.”

A Black Sea mission to escort commercial ships may be needed to prevent a global food shortage.

The Journal enthusiastically agreed with Keane’s proposal and wrote:

The mission would be to form an international coalition of warships to escort commercial vessels safely out of Odessa and the Black Sea. This would work as a coalition of the willing, and not a North Atlantic Treaty Organization project that would let Mr. Putin claim it is another NATO provocation.

There are military risks… Some critics will claim an escort mission would be too risky as a naval version of a “no-fly zone.” But it is much different… No military engagement would be needed if Russia doesn’t interfere.

Technically, this could be said about any military conflict. If the opposing army simply lays down its arms, no fighting will be necessary.

Of course, despite the optimistic assurances of Keane about the “risk profile,” the idea that Russia would simply stand by while U.S. and UK ships break its blockade is highly unlikely.

In almost any conceivable scenario, this operation could rapidly turn into a major naval battle, just like “no-fly zone” is a synonym for open and direct war between Russia and NATO.

Not even bothering to hide its cynicism, the Journal made clear that this major escalation would be “best planned and pitched as a humanitarian operation.” That is, a direct shooting war between the two largest nuclear powers would be “pitched” as a way to end world hunger.

The language of Keane and the Wall Street Journal dovetails perfectly with the rhetoric of U.S. officials and those of its imperialist allies.

Speaking at the World Economic Forum in Davos, Switzerland on Tuesday, European Commission President Ursula von der Leyen accused Russia of bombing Ukrainian food infrastructure and “hoarding its own food exports as a form of blackmail.” She said,

holding back supplies to increase global prices, or trading wheat in exchange for political support. This is using hunger and grain to wield power.

[T]he Russian military has repeatedly blocked safe passage to and from Ukraine by closing the Kerch Strait, tightening its control over the Sea of Azov, stationing warships off Ukrainian ports. And Russia has struck Ukrainian ports multiple times.

The food supply for millions of Ukrainians—and millions more around the world—has quite literally been held hostage by the Russian military.

Earlier this week, U.S. Defense Secretary Lloyd Austin announced that the U.S. would provide Ukraine with Harpoon anti-ship missiles via an intermediary, Denmark. The Harpoon is the standard anti-ship armament of the U.S. Navy, capable of sinking large warships.

On Friday, Ukrainian Ministry of Internal Affairs adviser Anton Gerashchenko tweeted that “The U.S. is preparing a plan to destroy the [Russian] Black Sea Fleet” as part of a “plan to unblock the ports.” He continued,

Deliveries of powerful anti-ship weapons (Harpoon and Naval Strike Missile with a range of 250–300 km) are being discussed.

Last month, the United States provided intelligence to Ukraine that allowed it to attack and sink the Russian missile cruiser Moskva, the flagship of Russia’s Black Sea Fleet.

The first countries to officially endorse the NATO-led naval operation in the Black Sea were Lithuania and the United Kingdom. On Monday, Lithuanian Foreign Minister Gabrielius Landsbergis called for a plan to break the blockade, declaring,

We would need a coalition of the willing—countries with significant naval power to protect the shipping lanes and countries that are affected by this.

The Guardian reported that UK Foreign Secretary Liz Truss agreed with the proposal, including “demining the harbour and providing Ukraine with longer-range weapons to defend the harbour from Russian attack.”

The plans now being discussed would mark a significant new escalation of the war, raising the prospect of NATO and Russian warships firing on each other, the potential invocation of NATO Article 5 and the abandonment of all restraints on the conflict, with catastrophic consequences for all humanity.