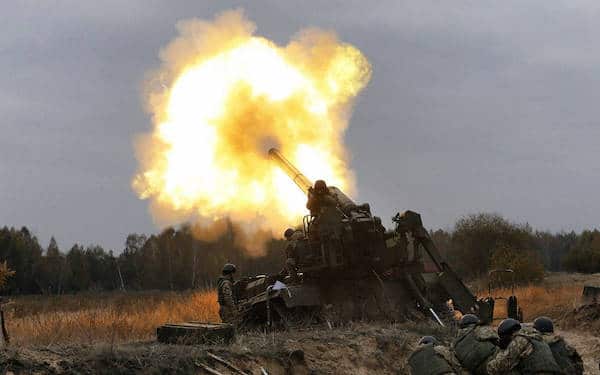 It is now official: French Caesar guns opened fire yesterday on civilian areas in the Donbass and Donetsk. The information came from the CtsKK, the government service of the Donetsk Republic, which is responsible for recording all Ukrainian fire on civilian areas. It was then relayed by the DPR authorities. Every day, the very brave officials of this service go to the scene of the bombing, risking their lives. They often arrive within minutes of the bombing, with the significant possibility of more fire falling in the area. This work is very meticulous, with officers systematically collecting the various pieces of shrapnel and debris from the shells or ammunition to determine the weapons used. The time of the shooting, the victims, their identities, the testimonies of the owners of the affected properties, everything is carefully collected and then entered into a database of testimonies. Driving around Donetsk and the Donbass, they are accompanied by the Military Police and are themselves officials of the Ministry of Defense. Since yesterday, they have established that French guns are killing civilians on the rear of the Donbass front.

Shell debris speaks volumes. Debris is indeed a valuable clue to the weapons used. For those of us who often go to the front, experience of the nature of shell debris is gained over time. It is then possible to recognize that such debris comes from such ammunition and weapon. Some debris is very easy to recognize, because it is very specific, such as the remains of Hurricane systems or Grad rockets, others, such as mortar rockets, are also very characteristic. For the debris of cannon shells, it is of course a bit more complicated. But there is always enough shrapnel left, to recognize inscriptions that were printed on the shells, or a particular shape of the shell head, not to mention of course unexploded shells, which is not uncommon. When the terror bombardments started again about 10 days ago on Donetsk and the cities of Donbass, it was immediately clear that something new had happened. Because at the sites of the Ukrainian artillery strikes, the same signs, the same remnants and pieces of shrapnel could of course be found. However, on 29 May, the impacts were nothing like what had already been observed. After analysis by the CtsKK experts, it was clear that some of the shells had been fired by American M777 howitzers. It took me a little more time to understand the nature of the shells, especially by talking to DPR soldiers or veterans of this army.  Usually the shells fired into the town, at least what I observed myself, were explosive shells, spraying a lot of shrapnel around them. But this was not the case on the various new impacts I saw. The ammunition used since that day and until yesterday, by these American howitzers, are in fact armour-piercing shells. They are in principle used to hit entrenched positions, hard or makeshift bunkers, and of course vehicles or armored vehicles. By bombing civilian areas with such shells, the aim is of course to kill civilians, but also to destroy a maximum of structures and infrastructures. These shells do little material damage when they land on the streets or in the open, but are devastating when they hit a building, having the real capacity, by their armour-piercing nature, to penetrate structures better, with the devastation one can imagine. Personally, I have never heard of such munitions being used on civilian areas of the Donbass in the past. And God knows how much the Ukrainians have fired all over the republican cities for the last 8 years.

Caesars are now killing Russian civilians in the Donbass. So yesterday, apparently for the first time, French guns opened fire on civilians. Given the nature of the Ukrainian army, which has been shelling civilians since the beginning of this war, I was going to say with relish, this is not surprising and makes the responsibility of the French government even greater. As early as 2014, through the voices of senior officers of this army, or even President Poroshenko, or more recently Zelensky, it was clear that civilians were and are priority targets for Ukrainian forces. I personally remember a video that I have not found on the internet, where Ukrainian tankers were filming themselves hilariously bombing a massive building block in Donetsk (summer 2014). In 2016, it was also the case of a sinister French neo-Nazi fighting under a false name (Thibault Dupire), in the Azov battalion and declaring on social networks his pleasure in killing civilians in the Donbass. Zelensky himself, in a very recent statement, said that Donbass would be a ruin and that it would be “deserted”, inferring that people will be killed before the conclusion of this war. In 2014, it was the Ukrainian army’s own chief of staff who, in a lengthy interview, explained that civilians were precisely a prime target. When asked about this, he said that this was a war strategy, cynically assuming that it was used by the entire Ukrainian army, whether neo-Nazi retaliation battalions or the regular army, since at the time these battalions were still independent of the army. As Xavier Moreau explained in his bulletin N° 86, with Stratpol, the Caesar gun is a good piece of equipment, with the definite advantage of also being a self-propelled gun. The difficulty here for the republican forces and the Russian army is that this gun, although not armored, can fire a few shells and then move quickly to take cover, thus escaping the Russian counter-battery fire…and can start again a little further away. I don’t have the information yet about the nature of the ammunition fired, but it will come soon, because the Ukrainians are now firing every day on the cities of Donbass, especially on Donetsk, Gorlovka, Makeevka and Yaccinovataya. In yesterday alone, 7 people were killed and 16 wounded and the killing continues. We notice every day that these shootings are carried out in short bursts. Apart from some bombardments (including the one we suffered on 4 June), As in the Petrovski district, where they aimed at a mine and the next day at a television antenna, the tactic is to launch a few shots, from a few shells to a dozen, and then let some time pass before opening fire again. Usually these shots don’t land in the same place, but hit other neighborhoods, or localities, half an hour or an hour or two later, sometimes more. These shootings are always carried out during the day, preferably when people are busy and moving around a lot. I have noticed myself that this often happens in the middle or late afternoon, sometimes more in the evening, especially if it is a weekend day.

France Info and Maryse Burgot… reporting with the Caesars. In a report worthy of the worst propaganda, Maryse Burgot explained to us that she had followed the French cannons the day before. I can’t even find words to describe this report, between morbid voyeurism, reality TV and a desire to create a buzz in French news. It was with full knowledge of the facts that she and her team, precisely in order to try to reach the French public through these guns, asked to follow them on the day before they bombed civilians on the following day, 6 June. The disgust is already unbearable, when one knows the truth, but worse still, the latter is deliberately rolling in disinformation. According to its claims, the 6 French guns had already destroyed at least 80 Russian artillery pieces, without even suffering a loss.