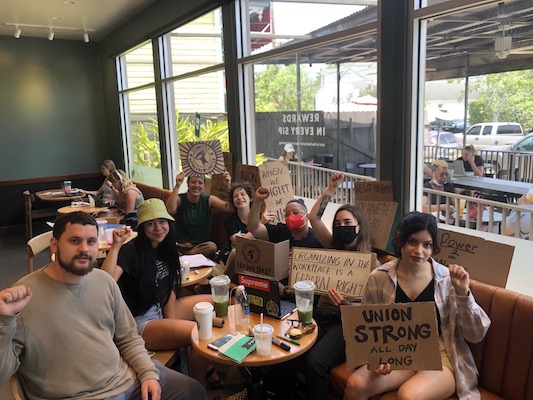 New Orleans Starbucks workers at 7700 Maple Street are the first in the city to file for union certification, amidst dozens of nationwide unionization efforts at the country’s largest coffee chain.

Despite a 39% soar in profits in 2021 and recent price hikes Starbucks workers, known as partners, remain overworked and underpaid. With the help of Starbucks Workers United, a collective of partners that aids unionizing stores, and the support of the local community, partners at Maple street seek to thwart the corporation’s union-busting efforts and become Louisiana’s first Starbucks to join the 50 and counting Starbucks locations to unionize nationwide.

From May 6-8, Maple Street partners organized a string of sit-ins at Starbucks’ 7700 Maple, 5335 Freret, and 2851 S Clairborne stores. The sit-ins were supported by the Southern Workers Assembly, a worker-led network that provides support to workers organizing in the South.

Billie Nyx, who worked at Starbucks for three years and piloted the unionization effort at Maple Street, cites overworking, under-scheduling, and lack of benefits as chief complaints prompting unionization.

“The problems with Starbucks are nationwide,” Nyx told Liberation News during a sit-in on May 7 at Maple street.

With almost any store you go into you’re going to deal with understaffing, under-scheduling, people being stretched thin.

The effort to unionize at Maple Street began in early March, when worker mistreatment reached a breaking point.

“Around Mardi Gras when they cut our hours and we were seeing record breaking profits in business, we were just so overworked and stressed out and we’re like ‘we gotta do something now.’’’ said Nyx.

That’s when I started having conversations with each of our partners… After I confirmed as much support as I could, I started printing out union cards and getting people to sign.

After Nyx and their fellow partners at Maple Street initiated the struggle, Starbucks Workers United stepped in to help.

While the unionization struggle at Maple Street is fueled by solidarity between partners within the store, solidarity between partners at different Starbucks stores throughout the city and nation also advances the collective labor rights struggle. Additionally, support from the local community is also essential to Starbucks partners’ unionization efforts, both in New Orleans and nationwide.

One example of this solidarity in action is the sit-ins that have been organized at multiple Starbucks locations throughout the area. “It’s really nice for us to have these sit-ins so that everyone behind the counter knows they’ve got people in their corner that want to support them,” said Nyx.

Supporters can also leave positive reviews of the workers to help protect them from retaliation:

Every Starbucks store has business cards for the district manager in them, so you can email them good reviews of your barista and it’ll make it harder for Starbucks to retaliate against them.

Another example is a recent workers’ barbeque on May 28, jointly organized by the Maple partners and the Southern Workers Assembly. The event provided an opportunity for partners and their supporters around the city to share organizing skills and stories with a larger worker community.

The first step is connecting workers who are in different work sites but the same company or industry… Any of these bosses could shut down a single store but whenever we have a movement across all the stores… we have more power and leverage to shut it down, and ultimately to win the demands we’re talking about—like living wages, like decent working conditions, like safe staffing, like paid sick leave.

Meg also emphasized the importance of organizing between industries:

Like many union organizers, Nyx was terminated in what appears to be a retaliatory move by Starbucks. However, Nyx and the Starbucks partners continue the effort towards unionization through ongoing sit-ins and other community events leading up to the upcoming Maple street election and beyond.

Nyx stressed the importance of organizing:

I just have this one message to other baristas: you have the power to make things right, and it just takes one person to say ‘I’m gonna put in the work, I’m gonna organize everybody.’