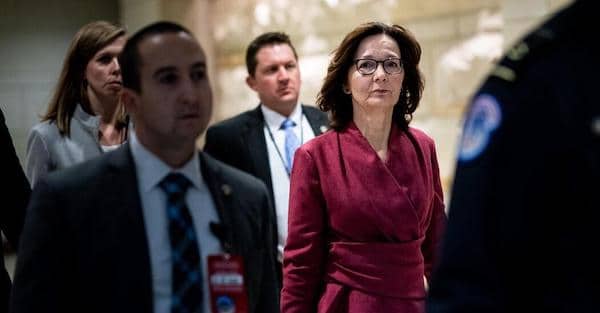 For services performed (and obfuscated), Haspel passed muster in the Senate and was confirmed as CIA Director on May 17, 2018. It was hard for me to believe she had been nominated, harder still to believe the Senate Intelligence Committee, knowing what they knew about Haspel, would give her a pass. So I went to the Committee hearing on May 9, 2018.

Letting Haspel Off the Hook

It was very difficult to watch some of my former colleagues file into the front rows in full support of the nomination of a torturer to head the CIA. Sen. Dianne Feinstein (D-California), who had published a damning report on CIA torture in Dec. 2014, lost her nerve and let Haspel off the hook when she asked her if she had overseen the interrogation of al-Nashiri. Haspel: it’s classified. And, in fact, the answer was successfully kept out of the media until now, with Mitchell’s testimony.

You are without a doubt the most qualified person the president could choose to lead the CIA and the most prepared nominee in the 70-year history of the agency. You have acted morally, ethically and legally over a distinguished 30-year career.

See what I mean by getting sick to my stomach? 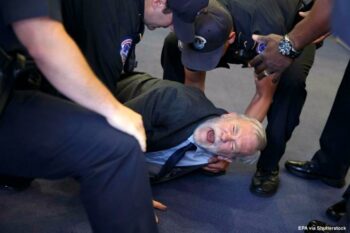 I interrupted the hearing to expose the farce, reminding the senators that they knew a boatload of disqualifying facts about Haspel–including the answer to Feinstein’s question; and that, yet, they were about to approve her nomination to be director of the CIA.

Burr had me seized. Joe Lauria described what happened next: consortiumnews.com. The 24 hours I had to spend in a very small cell in a dank DC jail felt right–even at the time. Feels more so in retrospect.

I have this moral thing about torture; I had thought almost everyone did! It turns out that Pete Hoekstra, chair of the House Intelligence Committee (2004-2007), had a different view. On March 2, 2006. I visited Hoekstra’s office to return the Intelligence Commendation Medallion given me at retirement for “especially meritorious service,” explaining, “I do not want to be associated, however remotely, with an agency engaged in torture.” It was no secret he fully supported the CIA methods; I did not hear back from him.

Years later, however, I welcomed the chance to elicit from Hoekstra open acknowledgement that he knew of and condoned the abuses carried out by the CIA (over which his committee was supposed to exercise oversight). On Dec. 11, 2014, I confronted the former Congressman live on CCTV’s “The Heat”, while discussing the Senate Intelligence Committee findings released two days before damning CIA torture.  It was a unique chance to hold Hoekstra publicly accountable for condoning torture, and the Michigan congressman rose to the occasion better than I could have hoped. (See minutes 8:15 to 10:41 of: www.youtube.com).

Not Only Intrinsic Evil; Also Ineffective

For me torture belongs in the category of intrinsic evil–always wrong–in the same category as rape and slavery. Human beings simply do not do such things to other human beings. As an Army Combat Intelligence officer, I also knew that torture does not “work”. So, four months after I gave back my commendation medallion, I felt affirmed and gratified that the head of Army Intelligence, Lt. Gen. John Kimmons, conceding past “transgressions and mistakes”, insisted:

No good intelligence is going to come from abusive practices. I think history tells us that. I think the empirical evidence of the last five years, hard years, tells us that.

Gen. Kimmons’s integrity and guts also made me proud again of my parent service, the U.S. Army. And get this: Kimmons chose to say this at a Pentagon press conference he himself arranged for Sept. 6, 2006, the same day on which he knew President Bush would publicly advertise the efficacy of an “alternate set of procedures” for interrogation.  These were given the euphemism “Enhanced Interrogation Techniques.” They include, under the exact same title in German (verschaerfte Vernehmung), interrogation “techniques” listed in the Gestapo Handbuch.

The NY Times story reporting that Haspel watched the waterboarding, typically of such stories, was buried on page 17 in the Saturday edition. The good news, I suppose, is that the draft got past the NYT censors and (I’m guessing here) that those censors may have shunned the usual procedure of seeking a prior nihil obstat from Headquarters in Langley. Below is a trimmed-down version of Saturday’s article, which was written by Carol Rosenberg and Julian E. Barnes:

The testimony emerged in pretrial hearings in the Cole bombing case at Guantánamo Bay, where the war court is wrestling with the legacy of torture after 9/11.

WASHINGTON–During Gina Haspel’s confirmation hearing to become director of the C.I.A. in 2018, Senator Dianne Feinstein asked her if she had overseen the interrogations of a Saudi prisoner, Abd al-Rahim al-Nashiri, which included the use of a waterboard.

Ms. Haspel declined to answer, saying it was part of her classified career.

While there has been reporting about her oversight of a C.I.A. black site in Thailand where Mr. Nashiri was waterboarded, and where Ms. Haspel wrote or authorized memos about his torture, the precise details of her work as the chief of base, the C.I.A. officer who oversaw the prison, have been shrouded in official secrecy.

But testimony at a hearing last month in Guantánamo Bay, Cuba, included a revelation about the former C.I.A. director’s long and secretive career. James E. Mitchell, a psychologist who helped develop the agency’s torture program, testified that the chief of base at the time, whom he referred to as Z9A in accordance with court rules, watched while he and a teammate subjected Mr. Nashiri to “enhanced interrogation” that included waterboarding at the black site.

Z9A is the code name used in court for Ms. Haspel.

The C.I.A. has never acknowledged Ms. Haspel’s work at the black site, and the use of the code name represented the court’s acceptance of an agency policy of not acknowledging state secrets–even those that have already been spilled. Former officials long ago revealed that she ran the black site in Thailand from October 2002 until December 2002, during the time Mr. Nashiri was being tortured, which Dr. Mitchell described in his testimony.

Guantánamo Bay is one of the few places where America is still wrestling with the legacy of torture in the aftermath of the Sept. 11, 2001, attacks. Torture has loomed over the pretrial phase of the death penalty cases for years and is likely to continue to do so as hearings resume over the summer.

Defense teams have been asking military judges to exclude certain evidence from the war crimes trials of accused Qaeda operatives as tainted by not just torture but also cruel, inhuman and degrading treatment. In May, that meant revisiting what happened nearly 20 years ago at the secret prison in Thailand.

Dr. Mitchell described how in late 2002 he and another C.I.A. contract psychologist, John Bruce Jessen, waterboarded Mr. Nashiri, who is accused of orchestrating the bombing of the Navy destroyer Cole in 2000. Seventeen American sailors were killed in the attack.

During three separate sessions, Dr. Mitchell held a cloth over the man’s face and adjusted it to direct the water as Dr. Jessen poured. …

The interrogation team shifted to other “coercive techniques,” including forcing the prisoner to spend time in a small confinement box. Dr. Mitchell said he had a “general memory of what was done”–the detainee, who was nude and sometimes hooded, was probably slapped and had the back of his head slammed into a burlap-covered wall–but testified that he did not have a “blow-by-blow recollection of any of that stuff.”

It was previously known that by the time Mr. Nashiri was waterboarded in late 2002, Ms. Haspel had taken over as the chief of base at the secret prison in Thailand. It has also been reported that she drafted cables relating what happened to Mr. Nashiri and what was learned during his interrogations and debriefings.

But Dr. Mitchell’s testimony went further. He testified that the chief of base observed the sessions, though she did not participate in them. [Emphasis added.] …

The judge, Col. Lanny J. Acosta Jr., agreed to allow Dr. Mitchell to testify because the C.I.A. had destroyed videotapes that defense lawyers argue showed the psychologists torturing and interrogating Mr. Nashiri and another prisoner at the black site in Thailand. Defense lawyers said that deprived them of potential evidence, including something they might have wanted to show a military jury deciding whether to impose a death penalty.

The disclosure that the C.I.A. had destroyed the tapes–most of them showing Abu Zubaydah, the first detainee taken into custody and known to be tortured by the C.I.A. after the Sept. 11 attacks–prompted the Senate Intelligence Committee to investigate the black site program.

Ms. Haspel has acknowledged her role in the destruction of those tapes as a chief of staff to the operations chief, Jose A. Rodriguez Jr. At her confirmation hearing, she said,

I would also make clear that I did not appear on the tapes.

Observers at the site in Thailand watched waterboarding and other interrogations via a closed-circuit video feed to a separate room. … The Senate Intelligence Committee study of the C.I.A. program, only a part of which is public, said that interrogators wanted to stop using “enhanced interrogation techniques” on Mr. Nashiri because he was answering direct questions, but they were overruled by headquarters.

Mr. Nashiri would also be tortured later, after Dr. Mitchell had taken him to a different C.I.A. black site. Another interrogator revved a drill next to the naked detainee’s hooded head, apparently to try to get him to divulge Qaeda plots. At another black site in 2004, the C.I.A. infused a dietary supplement into his rectum for refusing to eat. His Navy lawyer has called the procedure rape.

At her confirmation hearing, Ms. Haspel pledged not to set up any similar interrogation programs.

Anybody else sick to their stomach?