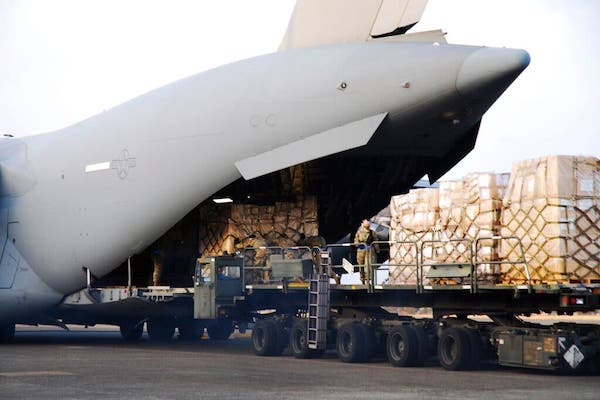 Military equipment given by Japan to Ukraine being loaded in an aircraft at Yokota US Air Force Base, Japan (File photo)

Only three weeks remain for the summit meeting of the North Atlantic Treaty Organisation (NATO) in Madrid, which is expected to unveil a new Strategic Concept aimed at redefining “the security challenges facing the Alliance and outline the political and military tasks that NATO will carry out to address them.”

The NATO and the European Union are in unison that the world has fundamentally changed in the past decade and strategic competition is rising, and security threats in Europe and Asia are now so deeply connected that the two continents become a “single operating system”.

The first one was about Washington stepping in to draw New Zealand, the reluctant Pacific partner standing in the shade, towards the Indo-Pacific centre stage. (Biden actually invoked memories of the landing of U.S. troops in World War II in New Zealand.) The second was an unprecedented act of diplomatic taboo, like dogs marking territory–“Serbia belongs to the West.” And Japan and NATO have messaged a new level of cooperation.

To be sure, in the U.S.’ struggle with China and Russia, Japan is emerging as the anchor sheet of its strategy in Asia. An agreement was reached in Tokyo on Tuesday during Bauer’s visit that Japan and NATO will step up military cooperation and joint exercises. (In May, Japanese Military Chief of Staff Koji Yamazaki had joined a meeting of NATO counterparts in Belgium for the first time.)

The Japanese Defense Minister Nobuo Kishi said after meeting with Bauer that Japan welcomed NATO’s expanded involvement in the Indo-Pacific region. He said, “The security of Europe and Asia are closely intertwined, especially now with the international community facing serious challenges.” Bauer also spoke of “shared security challenges” for the NATO and Japan. Prime Minister Fumio Kishida has been invited to the NATO summit in Madrid, which would make him the first Japanese leader to do so.

Japan’s case is that Russia’s special operation in Ukraine distracts the U.S., which may embolden China to unify Taiwan with military force. In reality, though, the Biden Administration does not seem to share Japan’s paranoia. The defence ministers of the U.S. and China are slated to meet in Singapore on the sidelines of the annual Shangri-La conference. The U.S. defence secretary Lloyd Austin has expressed cautious optimism that his forthcoming meeting will contribute to regional stability. Reportedly, the U.S. State Department changed its Fact Sheet over Taiwan this week, reinserting a line “We do not support Taiwan independence,” which had been removed a month earlier.

Japan’s eagerness to play an important symbolic and practical role in the West’s struggle with Russia stems from a complex set of motives. The alacrity with which Japan became one of the most active countries in implementing strong sanctions against Russia in support of Ukraine is striking. Almost overnight, Prime Minister Kishida swung to an openly negative stance towards Russia.

Within a fortnight of the Russian operation in Ukraine on February 24, Kishida stated that the “Northern Territories (Kuril Islands) are inherent territories of Japan” and on 8th March, Foreign Minister Hayashi followed up that the territories are “unlawfully occupied by Russia.” On 9th March, Kishida already referred Russia to the International Criminal Court. And on 16th March, Japan revoked Russia’s status as a “most-favoured trading nation”, froze Russian assets and excluded selected Russian banks from the SWIFT bank messaging system. Since the end of World War II, Japan had not sent military matériel to another country in the midst of fighting a war, but in in early March, the country’s Self-Defense Forces loaded up a Boeing KC-767 tanker aircraft with materials bound for the battlefields of Ukraine.

In sum, Japan eagerly demonstrated its willingness to become a proactive partner in the U.S.–Japanese alliance. Japan discarded the equity painstakingly garnered through the past four decades of negotiations to settle the territorial issue and negotiate a post-World War II peace treaty with Russia. In effect, Japan–Russia relationship has been turned into a potential flashpoint in Northeast Asia.

The U.S.-Japan mutual apprehension over the economic and military rise of China and North Korea’s increasingly capable missile and nuclear capabilities could be a motivating factor for both Washington and Tokyo, who no longer regard a split between Russia and China, as happened in the 1970s, to be a plausible near-term prospect. But, f undamentally, there is a shift in Japanese foreign policy.

Japan’s alliance with the U.S. and the emergent coupling with the NATO go far beyond a focus merely on the country’s survival, but offers vistas for Japan to transform as a leader in the Indo-Pacific region. No doubt, the understanding with the U.S. on the latter’s support in the long-standing dispute over Kuril has emboldened Japan.

Suffice to say, the Ukraine crisis has revealed that Asian states have much more diverse interests than many had been prepared to recognise. Now, this would act as a breaking mechanism on the path of the new cold war proponents in Asia. While the U.S., Australia and Japan have been at the forefront of countries opposing Russia, others have more mixed views.

A large bloc of non-aligned countries in Asia, including India and Indonesia, insist that Ukraine is quintessentially a regional conflict, notwithstanding its fallouts exacerbating global energy and food supplies. Basically, the vision of the Asian countries is of regional integration and modernisation and only a handful agreed to impose sanctions against Russia, while several–indeed, the big majority–have either openly opposed the sanctions regime or have refrained from sanctioning Russia.

The point is, Russia is a resident power in Asia and is a member of all the key bodies that constitute the region’s multilateral architecture–APEC, ASEAN Regional Forum, ASEAN Defence Ministers Meeting,  East Asia Summit, etc., apart from being a Dialogue Partner of the ASEAN since 1996. Russia has had an uneven engagement with Asia’s institutions, but most of the region’s participants prioritise their relations with Moscow. Unless Russia were to reduce its presence voluntarily, which is inconceivable, Asia’s multilateral architecture remains a hurdle for the U.S.’ efforts to assemble a “coalition of democracies” to isolate Russia.

The Achilles heel of the U.S.’ cold war strategy is that it lacks an inspiring economic agenda. The Biden administration dare not contemplate a return to free trade, given the entrenched protectionist sentiments  in the domestic politics. Even the tariff waivers issued by the Biden Administration on Monday on some solar panels for a 2-year period from four ASEAN countries–Cambodia, Malaysia, Thailand and Vietnam–needed to be carefully couched as part of efforts to address “the urgent crisis of a changing climate… to ensure the U.S. has access to a sufficient supply of solar modules to meet electricity generation needs while domestic manufacturing scales up.” Herein lies the contradiction: U.S.’ cold war strategy is primarily in military terms, whereas, what impresses Asian countries is economic clout.

Meanwhile, while many in the West tend to see China as firmly in Russia’s corner, the reality is more nuanced. China has sought to position itself as neither critic nor supporter of Russia, which, arguably, in the given circumstances, favours Russia, and has shown no signs of shifting its position in the face of Western criticism. Without doubt, China finds itself in an advantageous geopolitical situation.

That said, will China’s current stance hold the duration of the war in Ukraine which some predict could spill over to next year? The Russian military operation has not proceeded as successfully as Moscow would have wanted or expected. Yet, the military operation will not end without achieving the Russian objectives. And those objectives contain variables. On balance, Beijing would weigh in what the U.S.’ international standing is going to be at the end of it all, which would, of course, have great bearing on China’s future position in the world.