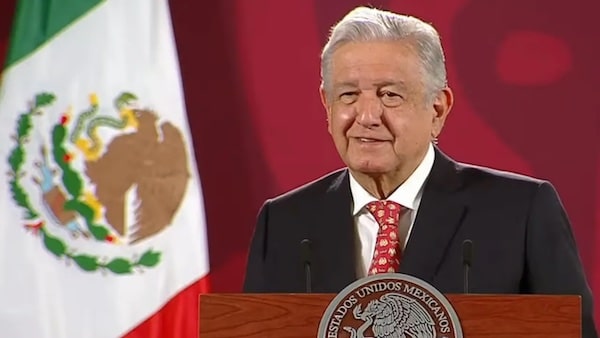 Mexico’s left-wing President Andrés Manuel López Obrador has condemned the illegal U.S. blockade of Cuba as a “type of genocide” and “tremendous violation of human rights.”

At his daily press briefing on the morning on June 6, López Obrador was asked about his decision to boycott the U.S. government’s Summit of the Americas in Los Angeles, California.

The Mexican president, known popularly by the acronym AMLO, explained that he refused to attend in order to protest Washington’s exclusion of Cuba, Venezuela, and Nicaragua.

López Obrador denounced the blockade that the United States has imposed on Cuba for more than 60 years, in flagrant violation of international law.

Mexico’s President Andrés Manuel López Obrador (AMLO) denounced the illegal US blockade of Cuba as a “type of genocide” and “tremendous violation of human rights.”

“That is a type of genocide,” the Mexican president declared, calling it “a tremendous violation of human rights.”

“When the subject of the blockade is addressed in the UN, every country votes to lift the blockade. One or two prevent it,” AMLO noted.

“It would be the peak [of hypocrisy] for us to attend the Summit [of Americas] in that context,” he added.

That violates the foreign policy of Mexico, which our constitution establishes, the non-intervention, the self-determination of peoples.

AMLO reiterated his call for “the integration of all of the Americas,” but he emphasized that “that is going to mean a change in the policy, leaving behind confrontation, leaving behind hate, leaving behind the threats, the blockades, the meddling, and choosing brotherhood.”

Mexican President López Obrador took a historic trip to Cuba, where he called for an end to the US blockade and criticized right-wing “coup-plotters.”

He said Latin America should form a union, amid “the economic decline of the United States.”https://t.co/A4eGIhcRhO

In May, López Obrador took a historic trip to Cuba, where he called for an end to the U.S. blockade and criticized right-wing “coup-plotters.”

“I will keep trying to get the United States to lift the blockade,” the Mexican president said.

The Summit of the Americas opened in Los Angeles, California on June 6.

Guatemala’s right-wing president, Alejandro Giammattei, likewise chose not to attend, in protest of the policies of the Joe Biden administration.

Mexico's President AMLO said he refuses to attend the US government's Summit of the Americas, protesting the exclusion of Cuba, Venezuela, and Nicaragua

AMLO condemned US "hegemony" and its "old policy of interventionism," of "lack of respect"