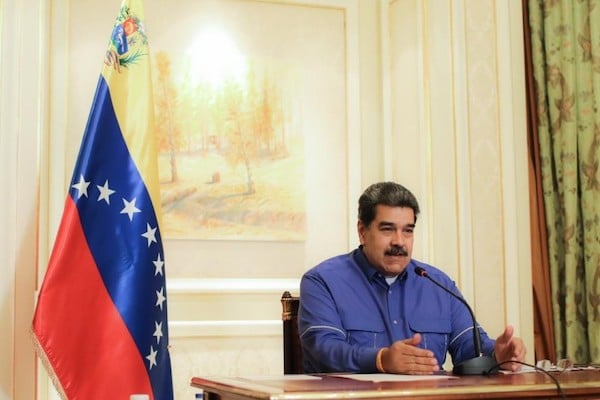 Since June 7, Venezuelan President Nicolás Maduro has been engaged in a so-called “Eurasian Tour” aimed at reaffirming and expanding Venezuelan cooperation with numerous states in North Africa, West Asia, and likely beyond. He has already visited Algeria, Turkey, Iran, and Kuwait. He has spoken with the future leader of the Organization of Petroleum Exporting Countries (OPEC) and signed numerous economic cooperation agreements with the aforementioned states, agreements which involve collaboration “in the political, cultural, economic, oil, petrochemical and tourism fields,” as well as in the areas of agriculture and food production. While in Iran, he also announced that direct flights from Caracas to Tehran would begin on July 18.

At the time of this writing, Maduro is in Qatar, and his next stop is unknown. One would expect him to pay a visit to one of the leading countries in the Eurasian Union, such as Russia or Kazakhstan, given that his trip is officially labelled a “Eurasian” tour and that Delcy Rodriguez, vice president of Venezuela, spoke virtually at the 2022 Eurasian Economic Forum in Bishkek to urge greater investment between Venezuela and the regional bloc.

With each new stop, Maduro has announced increased economic ties with states which the United States has labelled as both enemies and friends. These agreements come on the heels of the Biden administration’s disastrous ninth Summit of the Americas in Los Angeles, which sought to continue the political isolation of Venezuela despite the regional turn toward re-engagement.

Biden’s decision to exclude Cuba, Nicaragua, and Venezuela from the summit—a matter on which Justin Trudeau refused to comment—was met with widespread protest across Latin America and the Caribbean. The heads of state of Mexico, Honduras, Guatemala, Bolivia, and Saint Vincent and the Grenadines refused to attend the summit in protest of the exclusions, while the leaders of Chile, Argentina, and the thirteen Caribbean states of CARICOM attended the meeting but expressed their disapproval of the Biden administration’s actions.

Opponents of Biden’s decision to arbitrarily rule upon the legitimacy of states in the Western Hemisphere organized their own parallel summit in Los Angeles. It was called the People’s Summit. Cuban president Miguel Díaz-Canel, former Bolivian president Evo Morales, and Nicolás Maduro recorded video messages addressed to the organizers and participants of the summit, thanking them for their solidarity and expressing the need to found a new social, political, economic, and cultural paradigm in the hemisphere.

In Maduro’s address, which he recorded during his Eurasian Tour, the president spoke of his “hope for a new humanity without imperialist hegemony, without neocolonialism, without neoliberalism,” and cited his international state visits as an indication of Venezuela’s continued economic recovery and resistance.

Now we have been on this Eurasian tour—but we are passing through Algeria, which is in North Africa—engaging in an in-depth dialogue with the governments, with the people, learning from the experiences, of the responses, of the public policies that are being implemented in different countries…The world is much bigger than the dominance and arrogance of Washington…an empire in decline, that wants to behave as if it were still the hegemonic and dominant empire of the world and of our America…Please know and be assured that Venezuela has resisted. Venezuela is moving forward and is recovering.

2021 was Venezuela’s first year of economic growth since the simultaneous drop in oil prices and onset of U.S. sanctions almost a decade ago, and Maduro claims that “in 2022, we are seeing the expansion of the comprehensive recovery of our economy…and, in general, of the Bolivarian Revolution.”

This economic recovery has been accompanied by a number of significant international and domestic political victories for the Bolivarian Revolution. In October of last year, Maduro was invited to attend the meeting of the Community of Latin American and Caribbean States (CELAC) in Mexico as Venezuela’s legitimate president. Shortly thereafter, the ruling United Socialist Party of Venezuela (PSUV) won a landslide victory in regional elections that saw the participation of every major opposition party—the fifth electoral victory for the left in four years. As Leonardo Flores explains, there are five main reasons behind the PSUV’s November 2021 victory: good governance in health, housing, and food; the improving economic situation; the unity of the left; and the division and persistent unpopularity of the right wing opposition within Venezuela. With the economy continuing to improve and the opposition as disorganized as ever, the PSUV will likely hold onto power for years to come.

Meanwhile, the Biden administration has announced its intention to permit select U.S. and European oil companies to begin investment negotiations with Venezuela, indicating a slight alleviation of the U.S. government’s maximum pressure campaign against the Bolivarian Revolution.

It would seem that, after years of economic devastation, political instability, and thwarted U.S. coup attempts (six in total according to Justin Podur and Joe Emersberger, authors of Extraordinary Threat: The U.S. Empire, the Media, and Twenty Years of Coup Attempts in Venezuela), the Revolution has weathered its nadir. After hitting bottom and holding out, Maduro and the popular revolutionary process of which he is the figurehead have nowhere to go but up. Meanwhile, the right wing opposition, led by self-appointed president Juan Guaidó, is more powerless than ever. Any clear-headed observer can see the writing on the wall: the Bolivarian Revolution is here to stay.

With Maduro in power and Guaidó thoroughly discredited, some centrist Canadian papers like the Globe and Mail are now calling for a “reset” to Canada-Venezuela relations. If Canada truly wants a reset of relations, however, it will need to be—and should rightfully be—on the Venezuelan government’s terms.

When it comes to the Bolivarian Revolution, Canada has a lot to atone for. Senior Canadian government figures have boasted about interfering in domestic Venezuelan politics affairs while acting in their official diplomatic capacity in the country, including by “emboldening Venezuela’s opposition” and “work[ing] to get the country’s opposition parties to coalesce” behind Guaidó. This anti-democratic meddling was only one aspect of Canada’s anti-Bolivarian crusade, which included participation in the catastrophic U.S.-led sanctions campaign through its leading role in the Lima Group.

Now, all the imperialistic efforts of Canada and its allies have come to naught. Tens of thousands of Venezuelans are dead as a result, and shamefully, Canada still recognizes Juan Guaidó as the president of Venezuela. And while Canada’s man continues to playact as president, Maduro is travelling around the world and representing his country while signing actual economic agreements with actually existing states.

Everyone reading this knows that Canada will never admit its role in sowing the political and economic destabilization that has resulted in the deaths of so many Venezuelans over the past eight or so years. It is not even a possibility—imperialist arrogance runs too deep across the Canadian elite. What is possible, however, is that Canada implicitly admits its folly by maturing away from its imaginary Venezuelan president and beginning a process of reengagement with the real Venezuelan president, who, like it or not, is currently enjoying an international victory lap.