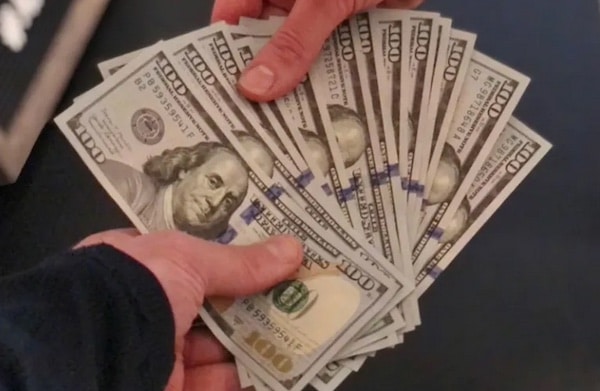 The Bureau of Labor Statistics reported that the rate of inflation rose to 8.6% in May, the latest high in a period of rapid growth in prices following the COVID-19 recession in March 2020. Indeed, inflation is now higher than it has been in the past 40 years. Up until around March of this year, the biggest component of inflation was in consumer goods, but the most recent surge in prices is being driven primarily by increases in food, energy, and shelter, which proposes particular dangers for worker households who are seeing more and more of their incomes being eaten away by the rising prices of necessities.

Inflation is a simple-sounding problem with complex causes. The Economics 101 explanation is that inflation is the result of “too much money chasing too few goods,” which causes the price of everything to be bid up. Bourgeois economists and policymakers focus almost entirely on the first part, and their explanations fall into one of two camps (or a mixture of both): (1) Inflation is the result of too much money being printed by the central bank, which results in a reduction in the value of each individual dollar, and (2) Inflation is a result of excess demand in the economy—consumers (or the government, through deficit spending) are able to buy too much relative to the supply of commodities, and as a result, prices increase.

According to the first explanation, inflation is now rising because the Federal Reserve has been engaging in several rounds of quantitative easing, a monetary policy tool designed to lower interest rates and increase the supply of credit money, since the Great Recession of 2008-09. In theory, this massive expansion of the money supply should result in corresponding levels of inflation. Yet, up until 2020, central banks around the world were waiting for price increases that never came. In fact, for the past 30 years (again, until 2020), inflation has trended downwards while growth in the money supply has trended upwards, so it’s difficult to see why, after all these years, monetary expansion would have this effect. Instead, the firehose of cheap credit went almost exclusively to financial and real estate speculation, sending the stock market to all-time-high after all-time-high while wages stagnated and inflation barely reached 2%.

The second explanation itself has two flavors, both of them related: the first one is that there is excessive demand for both investment and consumption in the economy, resulting from “pent-up” demand (households that put off purchases for later) and the massive expansion of government spending through multiple rounds of stimulus and unemployment. The second flavor is that, in the conditions of “labor shortage,” workers have too much bargaining power and demand higher and higher wages, forcing firms to raise prices, which causes workers to demand even higher wages in an ever-increasing spiral of inflation.

We did see a bit of the “pent-up demand” effect, reflected in the rise in prices of consumer goods during late 2021. However, current inflation is a global phenomenon—despite having far less generous fiscal stimulus in Europe, we see similarly high levels of inflation there, so it cannot be explained fully by government spending in the United States. As for wages, despite all the fearmongering about labor shortages by the mouthpieces of the capitalist class, real wages have actually been falling since the peak of the pandemic, because wage growth has not kept up with inflation. This represents a transfer from wage-earners to the owners of capital, since a worker’s wage buys fewer goods than it did before.

And in fact, we see exactly this: the share of corporate income going to labor has decreased. As economist Dean Baker puts it, “perhaps some economists can tell a story where rapid wage growth is driving inflation even as the wage share of income is falling, but I’m not that good an economist.” In other words, the idea that real wages are falling and are a significant driver of inflation is somewhat bizarre. 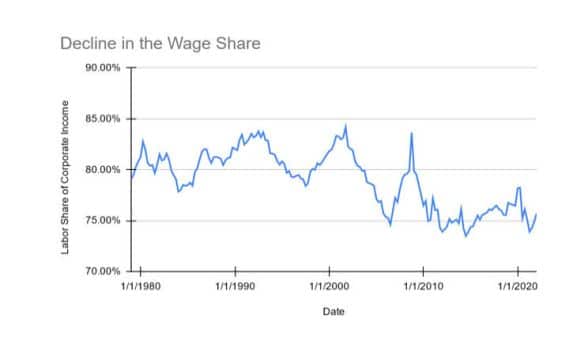 So what’s causing high inflation, if not money printing by the Federal Reserve or the fact that too many workers have jobs? The answer seems embarrassingly obvious. The world is in year three of a pandemic that has caused complete chaos in the globalized system of capitalist production—lockdowns are currently ongoing in the largest manufacturing cities in China and container ships are waiting in queues of up to 50 days to access ports. The Russian invasion of Ukraine has disrupted both a major global energy supplier and a major global food supplier, at the same time that rapid climate change is driving bad harvests throughout the world. The extension of supply chains across the world, what Marx called “the annihilation of space by time,” has left world commodity production extremely vulnerable to both natural and man-made disasters. In other words, the global system of capitalist production is still mired in a series of crises that are causing the prices of food and energy to skyrocket.

The second component of this inflationary pressure on the supply-side is the ability of large, concentrated capitalist firms to influence prices. As I noted above, wages have actually been falling during this period of inflation, while corporate profits have been skyrocketing as firms take advantage of this environment to raise prices as high as they possibly can. The New York Times refers to this as “greedflation,” though this is simply the capitalist mode of production working as intended. The reduction in competition due to business failures, tariffs, and the consolidation of capitalist firms into ever-larger monopolies all enhance the ability of firms to increase prices far beyond their costs of production.

Despite all of this, almost all of the discussion coming from governments and central banks of developed capitalist countries is focused on the demand side of the story—that is, reducing the money supply and aggregate demand (read: cutting wages and public spending). Federal Reserve Chair Powell is quite open about what needs to be done:

So, in principle, it seems as though by moderating demand, we could see vacancies come down and, as a result—and they could come down fairly significantly and, I think, put supply and demand at least closer together than they are. And that would give us a chance to get inflation down, get wages down, and then get inflation down without having to slow the economy and have a recession and have unemployment rise materially. So there’s a path to that.

The primary mechanism by which the central bank intervenes in an “overheated” economy, that is, one experiencing high inflation, is through raising interest rates, which the Fed is currently gradually doing. This increases costs of borrowing, reducing the capacity of households to consume and firms to invest. What Powell and Summers euphemistically call the solution to “tight labor markets” is actually an increase in unemployment.

On its own, monetary policy has historically had marginal-at-best effects on the rate of inflation itself. This is doubly true in the current environment; raising interest rates cannot end the war in Europe. It cannot prevent lockdowns in China or expand the number of shipping terminals. What it can do, however, is cause a recession; high interest rates mean firms will find it difficult to finance expansion and employment. Some will go under; the economy slows down, workers lose their jobs, and wages fall as the bargaining power of workers weakens. The remaining firms make do by paying workers less to do more (also known as increasing the rate of exploitation). In this context, the interest rate is a tool for managing the reserve army of labor.

This role can be seen most clearly in the story of the “Volcker shock,” where Paul Volcker, Fed chair under Carter and Reagan (as well as economic adviser to Obama) raised interest rates to up to 20% in service of controlling inflation. The result was the brutal recession in the early 1980s that inaugurated the era of neoliberal capitalism.