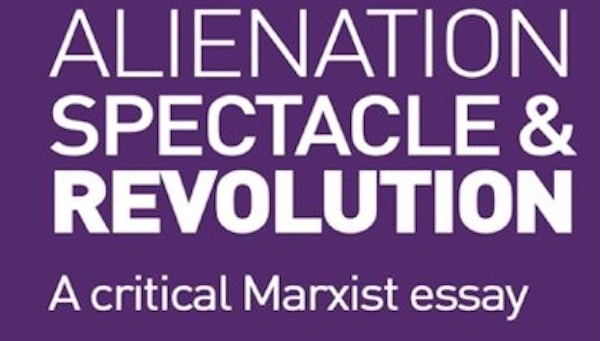 The tradition of concise introductions to Marxist theory is a long one, stretching back perhaps to Engels’s Anti-Dühring. Alienation, Spectacle and Revolution enters stridently into this tradition with an acerbic, tremendously illuminating, and urgent style. It is a book–not without its blind spots–that is utterly alive to how the crises of the past continue to structure the present. As one of the last books Neil Faulkner wrote, it surely serves as a testament to his scholarship, teaching and political commitment. 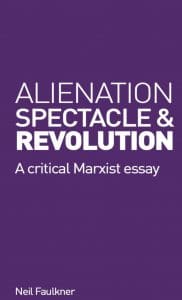 The book’s explicit aim is to offer a history of alienation under capitalism, as well as a way out of our alienating present. As such, the first half is concerned with analysing the historical embeddedness of our present conjuncture, whereas the second half is future-oriented. The chapters are divided into short, numbered sections (sometimes just a single paragraph), most of which employ a useful mixture of theory, history and–especially towards the end of the book–real-world examples.

Faulkner divides the history of capitalist alienation into three distinct phases. Each phase corresponds with an Industrial Revolution and a specific Marxist theorist. The first sort of alienation is the familiar kind outlined by Marx and Engels, whereby workers who control neither the means of production nor the surplus value they create become estranged from themselves, others, their environment, their labour and the products of their labour. The second kind of alienation, whose conceptualisation Faulkner attributes to Herbert Marcuse and the Frankfurt School, is brought about by consumer capitalism and commodity fetishism. Finally, in explicating our alienating present, Faulkner deploys Guy Debord’s notion of the spectacle. Here, our material conditions are continually presented to us and spectacularised, trapping us in a position of spectatorship that delimits our participation in the very reality being represented. In short, Marx is concerned with alienation among producers; for Marcuse, it is consumers who are alienated; while Debord is preoccupied with the alienated spectator. The near-seamless manner by which all of these theoretical and historical strands are brought together makes for a truly pleasurable read. It is not, however, clear where the unemployed, non-waged reproductive workers, or those without access to spectacle fit in this schema.

Faulkner posits that within our present conjuncture, the fundamental apparatus of capitalist alienation is what he calls the Wall, which is the various screens (mobile phones, televisions, computers) that, he argues, blunt our life force, critical faculties and sense of freedom. False needs, spectacle and neoliberal fantasy are all projected onto the Wall. The Wall, therefore, atomises us through seeming connectivity. As he puts it: ‘The Wall is an extreme expression of alienation’ (7).

Faulkner makes good, though not uncritical, use of Debord’s work on spectacle, insisting that endless summits, meetings, debates and parliamentary pageantry have made a spectacle of our politics, just as momentary protests (as opposed to prolonged class struggle) have become co-opted sites of spectacle. While this is, in many respects, a useful analysis, it is perhaps curious that Faulkner does not draw from more contemporary thinkers here.

The book then offers an illuminating discussion that draws from Faulkner’s earlier work on creeping fascism (which, unlike the fascism of the interwar period, is characterised by an extreme sort of individualism that acts as a mirror for alienated, atomised consumer spectators), as well as William I. Robinson’s concept of the Global Police State (wherein each state deploys security forces to guard the interests of transnational capitalism in its territory). The last of the book’s analytical chapters deals with corporate power and capital accumulation, linking capital’s will towards infinite value expansion with humanity’s existential crisis.

Faulkner covers a lot in these first chapters, and he does so without overwhelming the reader or leaving them behind. He writes knowledgeably about imperial warfare, COVID-19 (its origins and its spread), violence, nuclear annihilation, income inequality, debt, neurotic consumption, privatisation, financialisation–‘pure parasitism’ (67)–and climate catastrophe (where, unlike scholars like Jason Moore, Faulkner considers nature as separate from society). Each of these arenas of alienation, Faulkner posits, remains a spectacle precisely because no alternative is offered, or even seems possible.

Striking a psychoanalytic note, Faulkner argues that today’s society of the spectacle alienates us from our fundamentally cooperative species-being, inverting our libido into narcissistic individualism and inducing in us a fear of freedom. In this, Faulkner argues, is the making of mass psychosis. Such an argument makes use of several psychoanalytic thinkers (Reich, Fromm, Rank). Somewhat interestingly though, Faulkner does not employ the insights of Lacan, the psychoanalyst who is arguably most associated with alienation. However, this is consistent with the book’s thoroughly Marxian commitments. For Lacan, alienation is constitutive of human subjectivity, and although we might experience different degrees of alienation, we can never overcome it altogether. Faulkner’s alienation is at a piece with the early Marx. He appears to invest much in the Marxian conception of species-being, repeatedly stressing our essentially collaborative nature. As such, alienation is never presented in the book as a condition to be reconciled with or accepted. It can and must be overcome with open class struggle.

The second half of the book deals primarily with the imperative for social change. It is a wonderful read and marks a welcome shift away from the familiar structure of so many critical theory books, where an obligatory, superfluous note of anti-capitalist hope punctuates a thoroughgoing, book-length analysis of capitalism. The second half of Faulkner’s book constitutes chapters on the commons, democracy and revolution from below, the latter of which serves as the book’s conclusion. It is in this concluding chapter that Faulkner argues persuasively that it is only with revolution–‘an existential imperative’ (108)–that we can overcome capitalist alienation and build a new social order premised on mutuality and fairness. It is thus to revolution that we must commit ourselves completely. Appropriating a line from Saint-Just, he writes that ‘[t]hose who half make a revolution merely dig their own graves’ (115).

Of these latter chapters, the one on democracy is most noteworthy, a process Faulkner describes as ‘an organised, mobilised, self-acting social force’ (81). The argument in this chapter is as clear and persuasive as the others (democracy must be taken back from liberal parliamentary spectacle and be used to ensure robust debate within revolutionary organisations), but it is the style and structure of the chapter that are especially compelling. Looking to several historical examples (it is on the historical that Faulkner seems to write most powerfully) in the workplace, assemblies, trade unions and society more generally, Faulkner showcases how radical democracy has been employed to defeat capitalism and transcend alienation. In much of this chapter, Faulkner cedes the narrative voice to others (it is the only chapter in the book that makes extensive use of block quotes). We learn about the Paris Commune through Marx’s pen, the Soviet experience from Tolstoy, Spain’s anarchist committees from Orwell and Allende’s democratic victory via a communiqué issued at the time. Faulkner also offers several contemporary examples of class-based community movements from around the world that are engaged in resisting what he calls the rule of capital and state authority. Usefully, and also rather fittingly, the chapter concludes with five lessons on ‘the nature of mass revolutionary movements, and therefore about the nature of revolutionary agency’ (98).

Even when one disagrees with Faulkner (such as when he speaks of protest as a spectacle separate from sustained class struggle; his neglect of how technologies, like the Wall, might be politically repurposed; and some of his more dismissive remarks on autonomism), one marvels at the deftness of his writing; his ability summarise complex arguments while keeping the reader engaged and alert to his broader political project. There were, however, several notable gaps in the book. Faulkner is, himself, aware of these, remarking that books such as his that endeavour to present a compressed theoretical overview are always at risk of stripping their subject matter of nuance, qualification and dialectical rigour. We must, therefore, exercise caution with respect to what we demand of a book like this. Even so, the book would have benefitted from a more serious consideration of imperialism. In speaking of the technologies of the so-called First Industrial Revolution, for example, Faulkner does not mention the cotton gin. Similarly, Samir Amin’s notion of imperialist rent would have given the book’s survey of income inequality a more global purview, just as explications of forced relocation, extractivism and decolonial struggles in the Global South would have bolstered the book’s engagements with environmental destruction, the commons and democracy.

I did not know Neil Faulkner. Since his death in February of this year, many loving tributes have been published. One cannot help but be deeply moved by these. His warm and open demeanour appears to have been complemented by a fiercely committed anti-capitalist politics founded on solidarity and internationalism. What Faulkner meant to so many people–particularly young people–on an interpersonal and a political level cannot, of course, be reflected in a single book, especially not one that is, by design, as concise as this. Nonetheless, the breadth and generosity of insight contained in Alienation, Spectacle and Revolution, along with Faulkner’s many other splendid books, form part of a stunning oeuvre articulated in a voice whose pitch is determined by an impassioned urgency to build a better, de-alienated world.