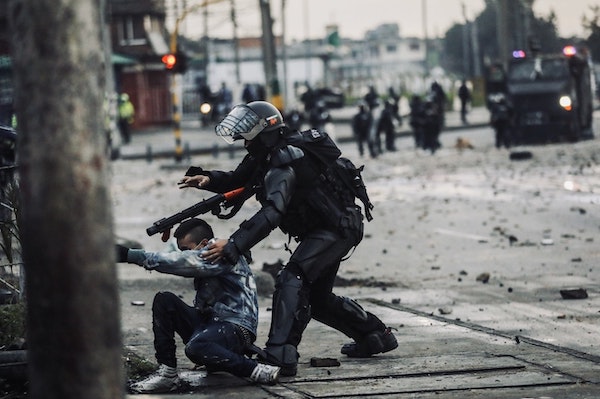 Despite the Left’s Victories, Warning Signs of a Fascist Backlash Appear in Colombia & Beyond

The decaying colonial regime in Colombia has reached a crisis. Its people, devastated by corporate destruction of their living standards and a corrupt narco regime which has exacted tremendous brutality upon them, has elected a leftist presidential candidate. Not one who represents a radical change, but one who at least represents a break from the fascistic ruling ideology of Uribismo. This could lead to the country being brought out of its misery, and undergoing the kinds of reforms which have uplifted the people of Venezuela and Bolivia. But if the imperialists succeed in their schemes, it could end up provoking an unprecedentedly violent reaction from within Colombia.

An indication of how much leverage the fascists have is that the new leader Gustavo Petro does not have a revolutionary agenda, but a social democratic one. The imperialists at CNN have taken comfort in being able to report that “Colombia’s newest president has also spoken of a desire to create a new progressive alliance in South America. This would likely involve Chilean president Gabriel Boric and Argentinian president Alberto Fernandez, rather than the three authoritarian countries of Cuba, Nicaragua and Venezuela.” This largely moderate nature of the pink tide that’s been occurring in Colombia and many other Latin American countries, in contrast to the militant anti-imperialism of those governments CNN vilifies, doesn’t mean these progressive leaders should be wholly dismissed. Any victory for the left means a weakening of imperialism. But in Colombia, and in the other Latin American countries Washington is desperate to maintain control over, the violent desperation of late-stage imperialism could still manifest in a full return for Operation Condor. And Petro’s wary attitude towards the region’s most hardline anti-imperialist states is a red flag that the imperialists could use him to disarm dissent.

Petro aims to negotiate the laying down of arms by Colombia’s revolutionary guerrillas, who’ve continued to wage war since the 2016 peace deal due to the regime’s ongoing crimes against the people. Such a process would necessarily entail him implementing substantial improvements in the people’s conditions. There’s no other way they’ll agree to disarm. But should Colombia’s guerrilla movement finally become a thing of the past, it will leave Petro vulnerable to a coup by the military. A coup which the armed forces will absolutely come to itch for should they not be replaced by loyal new personnel.

What anti-imperialists need to know about Colombia’s military is that it doesn’t just have latent reactionary sympathies, as Latin American militaries have so often had. It’s an entity which is directly led by neo-Nazis. Swastika-displaying Hitlerites guided the armed forces on how to suppress last year’s protests, designing the strategy behind the country’s world-shocking state violence against anti-austerity demonstrators.

This blatantly fascist leading ideology within the military is guided by the concept of the “dissipated molecular revolution,” which calls for treating the general population as enemy combatants so that a future revolution can be preemptively destroyed on a molecular level. This kind of thinking is what’s justified the shooting at civilians from helicopters, the use of paramilitaries to routinely kill off hundreds of political dissidents with no accountability, and the other atrocities Colombia has recently committed against its own people. If given the opportunity, these Nazis within the military will assassinate Petro and his Afro-Colombian vice president, then impose the kind of dictatorship that so many Latin American countries have seen. Colombia’s fascist armed service and law enforcement members hail from the strain of state terror which has defined the country for many decades, and which has carried out a political genocide that’s arguably still ongoing. The fascist paramilitaries are still there, and are still disappearing journalists and human rights activists regularly.

With Petro having a plan to disarm the left, but no plan to disarm the right-wing extremists in control of the military, disaster could easily strike. And even if no coup happens, when a new fascist gets back into office, the left will find itself without arms to defend from the inevitable reactionary terror.

As the region’s other major decaying regime in Brazil sees its power threatened, a similar fascist terror campaign could soon happen there as well, building on the one that’s already been unfolding in both countries. The CIA’s chief has told Jair Bolsonaro not to try to overturn the election if he loses, which shows how tenuous imperialism’s grasp over the region is becoming. It appears Washington hopes that if Lula wins, the U.S. will be able to make Lula into a new puppet, as it partially succeeded in doing when it got Lula to occupy Haiti during his time as president. But the Brazilian anti-imperialist movement could still hold Lula’s opportunistic tendencies in check, resulting in a new government for Brazil that resembles the one of Peru’s Pedro Castillo: not as radical as some would expect, but still one which the CIA wishes to overthrow. And since the CIA has failed at a coup in Peru, it could also fail in Brazil. Control over the region is increasingly uncertain for Washington. But it’s so afraid of further instability that it’s instructing its erratic puppet Brazilian leader not to carry out his own January 6th.

What the CIA wants in Brazil is not for democracy to be respected, but for a violent maneuver against the left that Washington can control. With its coups in the region consistently failing, and its broader geopolitical hegemony continuing to wane, the U.S. empire can only prevent Latin America from utterly breaking free by orchestrating massive destruction within the region. Similarly to how it’s succeeded at destabilizing much of the horn of Africa, it aims to sow such chaos within the American hemisphere, targeting both regions with the aim of preemptively stopping a turn towards multi-polarity. This is why the U.S. has backed Bolivia’s right-wing militias, and has so far succeeded at getting these terrorists to seize control over an economic hotspot market in La Paz. The aim is to make this kind of instability and violence spill over into all the other countries that have succeeded, or may succeed, at breaking free from imperialism.

The danger of fascist backlash is real, perhaps right now in Colombia more than anywhere else within the region. But as always with modern U.S. imperialism’s schemes for wreaking sudden, gargantuan havoc upon its enemies, this is only a spiteful hope for vengeance from an empire that’s losing its actual capacity to deal damage. Despite the centrist leanings of Chile’s Boric, he’s delivering on his promises to dismantle neoliberalism. Mexico’s AMLO has nationalized lithium amid his years-long campaign to end the country’s neoliberal paradigm. Bolivia has been building up its sustainable development and its people’s living standards since the reversal of the 2019 coup. This is in addition to the decades of progress that Cuba, Nicaragua, and Venezuela are building upon in their quest to construct societies free from imperialism’s influence. Venezuela has gotten so far that it’s come to have the imperialists begging it for oil.

As Mao warned, the imperialists and their running dogs will never put down their knives. They’ll never stop trying to inflict violence upon those who seek to end their rule, not until their rule is ended for good and they’re made extinct. Whatever future violence they carry out across Latin America and beyond, this won’t prevent their downfall, nor the emergence of the new world that the anti-imperialists are building.