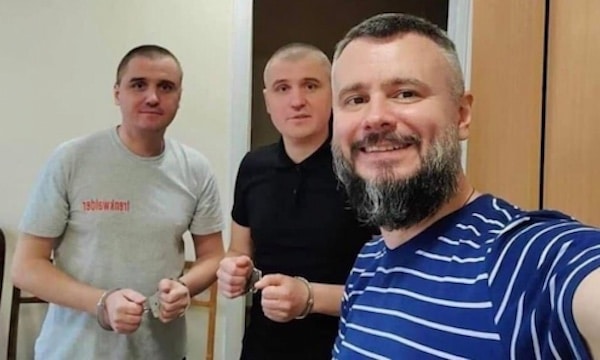 Alexander and Mikhail Kononovich with their lawyer

TWO jailed Ukrainian communists have been pictured handcuffed but alive as they face charges of attempting to overthrow the government and seize state power.

Alexander and Mikhail Kononovich were detained on March 3 following the Russian invasion, part of a crackdown on left and opposition groups.

Mikhail Kononovich is the leader of the youth wing of the outlawed Communist Party of Ukraine (KPU) and both were active in the World Federation of Democratic Youth (WFDY), a global organisation of progressive youth groups.

Before their arrest, the brothers had been involved in a demonstration in front of the U.S. embassy in Kiev demanding that Washington stops its military expansionism in Europe via NATO.

The pair were initially accused of being “propagandists” who sought to “destabilise” the internal situation in Ukraine and of spying for both Russia and Belarus.

WFDY immediately issued an urgent appeal for their release and said it feared the brothers would be murdered.

But there was no further information on their safety or whereabouts in the aftermath of their arrest, despite calls for the European Union to intervene.

The brothers are active anti-fascists and had held regular protests in support of Belarus outside the embassy in the Ukrainian capital.

But now lawyers report that they have been threatened with life behind bars for the demonstrations, despite them having been approved by the authorities beforehand.

Supporters suspect they have been beaten and tortured by the Security Service of Ukraine (SBU) and are being pressed to admit to crimes against the state in return for a more lenient sentence.

They are accused of violating article 109 of the Criminal Code of Ukraine, in particular “calls for a violent change or overthrow of the constitutional order or for the seizure of state power, as well as the dissemination of materials calling for such actions.”

It is believed that they were taken back to the SBU on Sunday for further interrogations and it is reported they were told to accept the charges against them in return for 10 years in prison or face life behind bars should they refuse.

WFDY continues to demand their immediate release from prison and the lifting of the ban on the KPU.

Kiev has however moved to outlaw more leftist and opposition parties, taking steps to make a temporary ban on 11 opposition groups in March permanent.

Ukraine faced criticism after introducing legislation banning the import and promotion of Russian books and music on Sunday.

One of the new laws will forbid the printing of books by Russian nationals, unless they renounce their Russian passport and take Ukrainian citizenship. This will only apply to those who held Russian citizenship after the 1991 collapse of Soviet rule.

Another law will prohibit the playing of music by people who gained Russian citizenship after 1991 on media and on public transport.