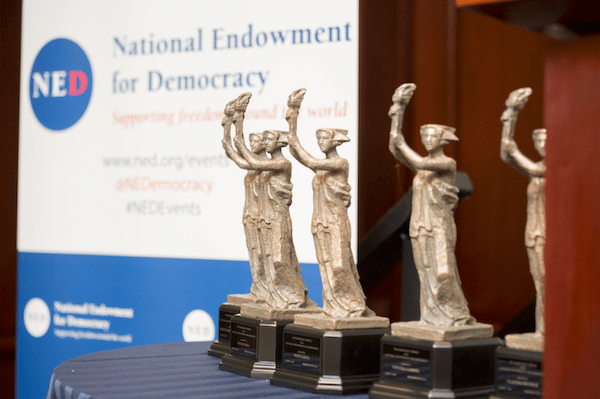 NED Democracy Award, a small-scale replica of the Goddess of Democracy that was constructed in Tiananmen Square in Beijing, China, during the student movement for freedom and democracy in 1989. [Source: ned.org] 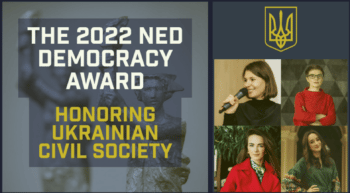 On June 8, the National Endowment for Democracy (NED) awarded its annual “Democracy Award” to “partner organizations” whose purpose is to mobilize public opinion in support of an escalation of U.S. military involvement in Ukraine.

The NED is a CIA offshoot founded in the early 1980s to support NGOs and political parties loyal to the U.S. and to advance U.S. propaganada. Virtually all its funding comes from the U.S. government, specifically earmarked by an act of Congress.

William Blum, one of the founders of CovertAction Magazine, called the NED “a Trojan Horse agency” because it pretends to promote democracy while secretly working to undermine it.

In the 1980s, the NED provided $140 million to dissident groups in the Soviet Union in an attempt to facilitate its downfall. Since 1989, the NED has financed 103 organizations in Ukraine with the goal of prying Ukraine away from Russia and into the Western orbit.

NED-supported groups—including those receiving this year’s “Democracy Award”—were a key force behind the 2014 coup overthrowing the pro-Russian government of Viktor Yanukovych and now play a key role in trying to sustain the regime of Volodymyr Zelensky and defeat Russia, including by waging a worldwide propaganda war against it.

The attempt to revive a Cold War-type atmosphere was apparent at the “Democracy Award” ceremony on June 8 where Ronald Reagan was invoked as a hero by Kenneth Wollack, the NED’s Chairman of the Board, and by the NED’s CEO, Damon Wilson, a former Executive Director of the anti-Russia, pro-NATO Atlantic Council and a U.S. embassy official in Baghdad during the Iraq War.

Senator James Risch (R-ID), the ranking member of the Senate Foreign Relations Committee, compared the Ukrainian struggle to that of the American colonies fighting Great Britain in 1776 while conflating modern-day Russia with the Soviet Union.

Damon Wilson said that the NGOs receiving the NED’s Democracy Award “exemplify the heroic struggle, courage and determination of millions of Ukrainians who risk everything to defend freedom and democracy.”

Ukraine though is not a functioning democracy: President Zelensky has banned eleven opposition parties and increased the power of Ukraine’s security services which have enacted an extra-legal campaign to arrest and in numbers of cases execute civilian officials advocating peaceful rapprochement with Russia.

In a February 27 rally at the White House, Wilson advocated for the “largest solidarity package the world has seen since the Marshall Plan” to “stop Putin’s aggression,” claiming that a “generational movement” was required to “defeat his tyranny.” 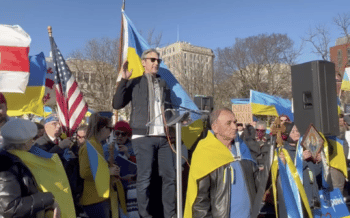 In short, Wilson was advocating for regime change within Russia—in violation of Russian sovereignty.

One of the NED Democracy Award recipients, the Anti-Corruption Action Center (AntAC) has shifted its focus during the war from anti-corruption investigations to trying to “bring global awareness to atrocities committed by Russia in Ukraine.”

The AntAC has also adopted a “Block Putin Wallets” campaign, whose purpose is to “raise awareness of how Kremlin-linked wealth buys influence in Western democracies.”

The campaign, with NED support, has employed a team of analysts that helped to locate the property of Russian oligarchs loyal to Vladimir Putin. It in turn pushes for the freezing and confiscation of their assets and aims to stop the flow of money allegedly being used to finance the war in Ukraine. 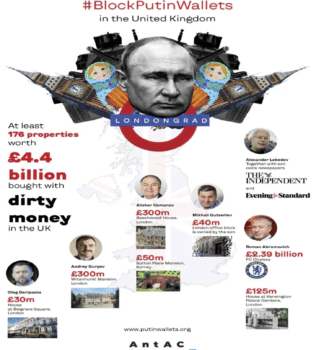 The “Block Putin Wallets” campaign is part of a propaganda effort—in support of the U.S. sanctions policy—that obscures the structural forces driving corruption worldwide and the fact that Putin actually took measures to curb corruption under his predecessor Boris Yeltsin, which resulted in large part from an ill-conceived privatization initiative promoted by the U.S.

The neo-McCarthyist undertones of the “Block Putin Wallets” campaign is apparent in the charge that Russia is subverting Western democracies and controls Western politicians who advocate for more cooperative policies with Russia.

The rhetoric fits a long-standing pattern in Western history—detailed in Guy Mettan’s book, Creating Russophobia: From the Great Religious Schism to Anti-Putin Hysteria (Atlanta: Clarity Press, 2017)—of playing up the threat of Russian subversion in order to justify Western imperialism.

Ironically, AntAC was itself investigated for corruption as part of a larger probe by Ukraine’s Prosecutor General’s Office into whether $4.4 million in U.S. funds to fight corruption inside the former Soviet Republics had been improperly diverted—an investigation which the Obama administration had tried to squelch.

AntAC’s supervisory board includes Francis Fukuyama, a Reagan-era State Department staffer who also sits on the NED’s board. He wrote the famous essay, “The End of History and the Last Man,” which celebrated the triumph of capitalism over communism following the end of the Cold War. 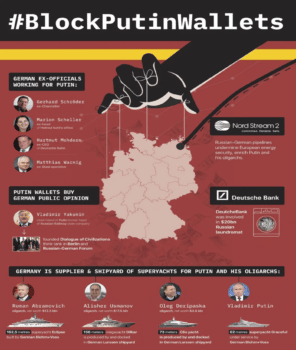 Another board member is Karen A. Greenway, a former FBI special agent. Greenway had led investigations into corruption in the inner-circle of Ukraine’s pro-Russian leader Viktor Yanukovych (2010-2014) and helped block the return of funds to him that had allegedly been stored in offshore banks.

From its founding in 2012, AntAC was focused on uncovering corruption in Yanukovych’s government as part of U.S. regime-change designs.

More recently, AntAC has targeted the Platform for Life, an opposition party consisting of many of Yanukovych’s supporters which favors negotiation with Russia.

AntAC claims that Platform for Life members are not only corrupt but have conducted “anti-Ukrainian activities” for years in order to “undermine Ukrainian independence and to strengthen Russian influence” in Ukraine.

The executive director of AntAC, Daria Kaleniuk, has taken to the airwaves of MSNBC to criticize U.S. President Joe Biden for his alleged “inaction” on Ukraine—despite his having sanctioned more than $54 billion in arms supplies to Ukraine this year—and to lobby for more weapons and intervention from the West.

A graduate of the Chicago-Kent College of Law and fellow at the World Economic Forum where she was a young Global leader in 2004, Kaleniuk came to international media prominence when she asked British Prime Minister Boris Johnson at a press conference in Warsaw why Johnson did not support the establishment of a no-fly zone over Ukraine that would have started World War III. 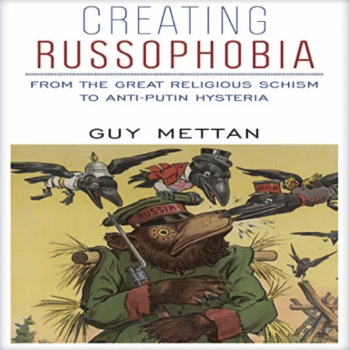 Characterizing Putin’s regime as “totalitarian,” Kaleniuk’s political extremism was further apparent in her call in 2020 in the Kyiv Post for “economic sanctions directed against all “anti-Western MPs in Ukraine”—meaning MPs who did not want to acquiesce to the transformation of Ukraine into a vassal state of the EU, U.S. and NATO.

In her view, these politicians committed the sin of promoting a “consistent series of messages designed to undermine Ukraine’s Euro-Atlantic integration.”

The Center for Civil Liberties (CCL) is another NED grantee and Democracy Award recipient that has been at the forefront of the propaganda war over Ukraine.

A key part of its mission is to document Russian war crimes in Donbas— though Ukraine has been responsible for the majority of human rights crimes there since the war started after the U.S.-backed coup in 2014.

Residents from towns in eastern Ukraine have reported on widespread rapes and torture of captured prisoners by Ukrainian troops and constant shelling of civilian centers and terror bombing over an eight-year period. 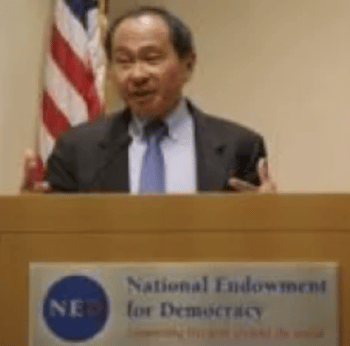 This is ignored by the CCL, which instead has tried to spotlight the stories—real or imagined—of victims of sexual violence by Russian troops in Ukraine and women abducted by Russian troops and taken into captivity in Russia.1

The CCL has further mounted an international campaign to release the Kremlin’s political prisoners, and aims to raise awareness about political persecution in what it calls Russian-occupied Crimea—though Crimeans voted to rejoin Russia in a referendum following the 2014 Maidan coup.

CCL Director Oleksandra Matviychuk—whose Twitter account featured a photo of Vladimir Putin looking like Adolf Hitler and says that Russia started the war in Ukraine in 2014 by invading Crimea and Donbas—co-authored a study “The Fear Peninsula: Chronicles of Occupation and Violations of Human Rights in Crimea.”

Much like AntACT, CCL helped support the 2014 Maidan coup by providing legal aid to demonstrators who were detained by Ukrainian security forces and by documenting human rights abuses of those security forces.

On its website, the CCL highlights the plight of a Belarusian journalist, Andrei Alexandrov, who was given a fifteen-year sentence for high treason by the Alexander Lukashenko government after he paid the fines of people who had been detained during foreign-sponsored protests designed to bring down Lukashenko’s government.

Lukashenko has been a target of U.S. regime-change and color revolution operations as one of Europe’s last remaining socialist leaders and a close ally of Vladimir Putin. 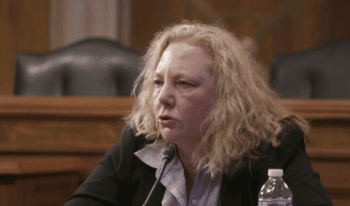 The CCL has also taken up the cause of Crimean Tatar political prisoners accused of high treason as a result of their connection to the Islamic party, Hizb ut-Tahrir, which the Russian Supreme Court declared a terrorist organization in 2003.

Hizb ut-Tahrir is also banned in Jordan, Egypt, Saudi Arabia, Uzbekistan, Turkey and China, with former British Prime Ministers Tony Blair and David Cameron calling for its banning in the UK. Hizb ut-Tahrir has supported the overthrow of governments and its literature supports suicide bombings in Israel.

While the CCL on the whole addresses some real injustices, its political agenda is apparent in the causes it takes up—which dovetail perfectly with U.S. imperial interests and efforts to demonize and weaken Russia, and advance NATO. 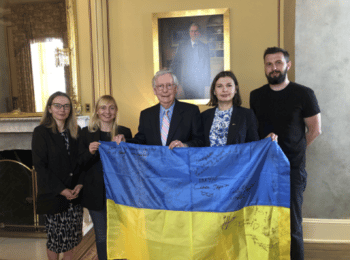 Characterizing itself as a partner of the NED, the Public Journalism Lab (PJL) has set out to counter what it terms the “Russian propaganda machine” by offering one-sided propaganda of its own which heroizes the Ukrainian side in the war and spotlights alleged Russian war crimes.

The PJL’s director, Nataliya Gumenyuk—who previously worked for the NED-funded Hromadske TV and wrote a book that was shortlisted for a BBC book-of-the-year award entitled The Lost Island: Tales from Occupied Crimea (2020)—has promoted misleading information about alleged Russian atrocities at Bucha, suppressing evidence that suggests Ukrainian militias carried out executions there.

Gumenyuk, whose group feeds the Western media information about Ukraine, has been granted access to the pages of The Atlantic, The Washington Post and The Guardian to promote her viewpoint that “the [Ukraine war] is a black and white war,” with an “aggressor [Russia]” and a “democratic country defending itself.”

In one piece in The Guardian, Gumenyuk referred to Luhansk as being occupied by the Russians. However, its people voted for autonomy in a referendum and mostly welcomed Russian intervention after being subjected to years of atrocities and shelling by the Ukrainian army—something that Gumenyuk and her ilk never reported on. 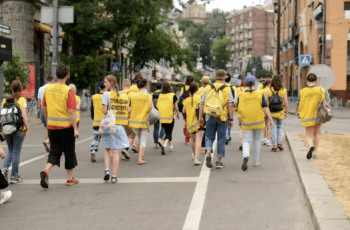 These designations are key to the “manufacture of public consent”—and psyops being waged on the U.S. public with their own tax dollars through the NED.