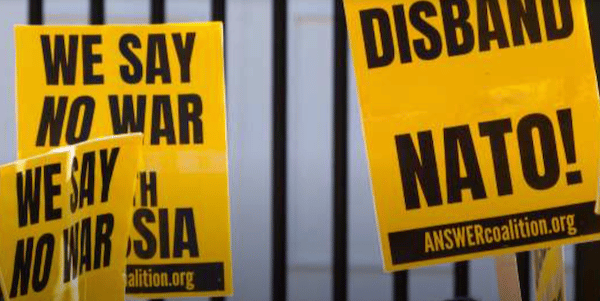 Leaders of the member countries of the imperialist NATO military alliance concluded their annual summit in Madrid today. This summit was a clear display of NATO’s commitment to continuously fuel the fire of international conflict as the major capitalist powers drag the world back into a Cold War-style period of global confrontation.

In preparation for the summit, NATO members prepared a new “Strategic Concept” document that described the alliance’s key goals moving forward. The Strategic Concept’s principal target is Russia, which it labels “the most significant and direct threat” to NATO. Secretary-General Jens Stoltenberg promised even more support for Ukraine’s military in its war with Russia.

The document labeled China a “systemic challenge.” While hostility to China has been NATO’s de facto approach for years, this announcement is a notable escalation. In essence, the NATO members are publicly announcing that China poses an existential threat to the world order that they dominate. China is pursuing a “no limits partnership” with Russia as it aims to fundamentally change the global political landscape such that the Pentagon and Wall Street no longer reign supreme. This is unacceptable to NATO.

Many NATO states like Britain have called for increasing arms shipments to Taiwan, which is rightfully claimed by China as part of its national territory. The United States has been the principal military and political backer of Taiwan since the island was seized by the defeated dictator Chiang Kai-shek at the conclusion of the Chinese Civil War in 1949.

NATO–the North Atlantic Treaty Organization–pretends to be a defensive alliance where all states come to the aid of any member that is attacked. But as NATO’s own documents show, their ambitions are certainly not limited to the North Atlantic. It is in fact an instrument for the maintenance of an imperialist-dominated world order, threatening unthinkable violence against any country that dares to challenge it.

On Tuesday, Chinese Ambassador to the United Nations Zhang Jun expressed deep concerns and urged NATO to “learn its lessons and not to use the Ukraine crisis as an excuse to stoke worldwide bloc confrontation or provoke a new Cold War, and not to look for imaginary enemies in the Asia-Pacific or contrive disputes and divisions.”

Although NATO’s Strategic Concept hides behind the language of democracy, peace and independence, NATO’s actions before and during the summit are aimed at triggering a new Cold War with China and Russia. NATO countries and their strategic goals only fuel the danger of catastrophic global war as they ignore the economic, social and environmental toll of their military buildup. The working class across the world already is suffering greatly with the start of another Cold War and has every interest in the end of imperialist escalations.