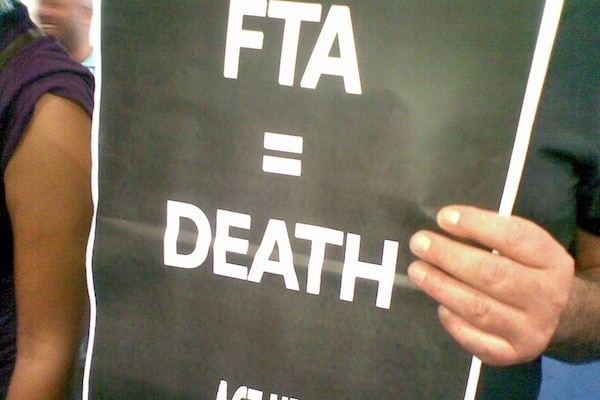 in an inter-connected world, power does not need to be a zero-sum game… the United States does not seek to contain China.

But Obama soon changed course with his ‘pivot to Asia’, first announced in November 2011. After his re-election in 2012, the Trans-Pacific Partnership (TPP) became the economic centrepiece of the new U.S. strategy to check China’s growth and technological progress.

His U.S. Trade Representative (USTR) claimed the TPP was based on principles the U.S. champions, such as protecting intellectual property (IP) and human rights. While claiming all who accept its principles would be welcome to join, China was conspicuously not among countries negotiating the TPP.

With the military and economic containment of China central to U.S. security strategy, the TPP was concluded in 2015. Obama emphasized,

TPP allows America–and not countries like China–to write the rules of the road in the 21st century.

Creating an “anyone but China club” was the U.S. motive for establishing the TPP. But with changed public sentiment since Trump’s presidency, once Obama’s loyal Vice-President, now President Biden did not attempt to revive the TPP during his presidential campaign, or since.

“American prosperity and security are challenged by an economic competition playing out in a broader strategic context… We must work with like-minded allies and partners to ensure our principles prevail and the rules are enforced so that our economies prosper”, noted President Trump’s national security strategy.

Meanwhile, under Shinzo Abe, Japan radically transformed its security policy. Abe has greatly expanded the Japan Self-Defence Forces’ role, mission and capabilities within and beyond the U.S.-Japan alliance, especially in East Asia.

‘Defence cooperation’ has also been enhanced through country-to-country arrangements, such as the recent Japan-Australia Reciprocal Access Agreement as well as the earlier Japan-India Acquisition and Cross Servicing Agreement.

The U.S. security profile in the region has been boosted by the AUKUS (Australia-UK-USA) alliance. Its clear intention is to enhance the U.S. and its allies military presence in the Indo-Pacific, with the greatest ‘China focus’ of all regional security arrangements.

The U.S. is also linking trade to its national security strategy, especially to contain China, in Africa and Latin America. As the USTR notes,

The Biden Administration is conducting a comprehensive review of U.S. trade policy toward China as part of its development of its overall China strategy.

Addressing the China challenge will require a comprehensive strategy and more systematic approach than the piecemeal approach of the recent past.

Reflecting his Interim National Security Strategic Guidance, Biden emphasizes, “The United States must renew its enduring advantages…; modernize our military capabilities…; and revitalize America’s unmatched network of alliances and partnerships”. He notes “growing rivalry with China, Russia… reshaping every aspect of our lives”.

Biden insists his administration “will make sure that the rules of the international economy are not tilted against the United States. We will enforce existing trade rules and create new ones… This agenda will strengthen our enduring advantages, and allow us to prevail in strategic competition with China or any other nation”.

His administration announced a review of all Trump-era trade negotiations. Due to expire in 2025, President Clinton’s African Growth and Opportunity Act has offered enhanced U.S. market access to qualifying African countries since 2000.

In April 2021, Secretary of State Antony Blinken confirmed U.S.-Kenya FTA talks would resume. Observers believe the U.S.-Kenya FTA, initiated by Trump in 2020, would help expand U.S. ‘carrot and stick’ trade and security policies on the continent to counter China.

Now, five years after Trump withdrew from the TPP, Biden has revived Obama’s China strategy with his own Indo-Pacific Economic Framework. Smug, he could not help but echo Obama’s TPP brag, “We’re writing the new rules”.