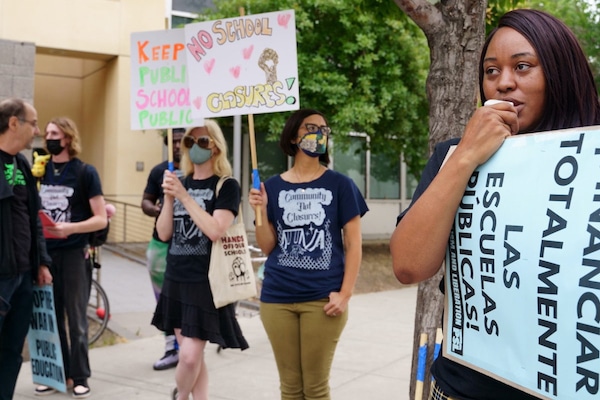 On April 29, teachers and families joined forces with International Longshore and Warehouse Union port workers for a full day of action, striking across all of Oakland’s schools, rallying downtown, then shutting down the Port of Oakland, the third busiest port in the country. Aligning against a common enemy–the capitalists intent on claiming Oakland’s resources for profit–teachers, families and community allies, including the Party for Socialism and Liberation, marched under the banner of a new coalition called SLAP: Schools and Labor Against Privatization.

For months, school board meetings have been flooded with outcry from parents, teachers and children defending public education. Since May 25, the community has been occupying Parker Community School to protest its closure.

Ninety-three percent of students at the affected schools are foster youth, English learners, or low-income, compared to the district-wide average of 80%. Twenty-two percent of the District’s students are Black, yet Black students are 36% of those whose schools would be closed. Oakland’s predominantly white public schools, in more affluent neighborhoods, have not been targeted. At no point did the school board consult the most impacted communities.

OUSD blames declining attendance and a $40 million budget deficit, conveniently ignoring that they have long under-resourced these schools and driven families to enroll their children elsewhere, further reducing school funding. This excuse flies in the face of Oakland’s massive wealth, which the Democratic city administration spends freely on police and playgrounds for the rich.

The militant strike forced OUSD to reduce the number of schools designated for closing or consolidation from 15 to 7, and one school board director resigned.

Still targeted for closure is Parker Elementary, which has served a majority Black (51%) and Latino (39%) student body for the last 96 years. On May 25, after a tearful graduation for children who didn’t want their neighborhood school taken away, a group of parents, teachers and allies stayed on campus.

The people of Oakland are no strangers to struggle. For the last 5 weeks, families have continued their sit-in to keep Parker open, drawing inspiration directly from the Black Panther Party’s Freedom Schools. 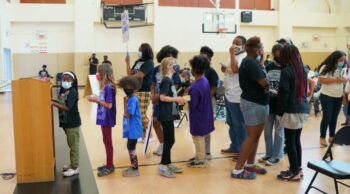 Students have repeatedly spoken out at OUSD Board meetings against the plan to take away their schools. (Photo: Liberation News)

Since seizing the school grounds, families have hosted free summer programs and cultural events in the very space Oakland’s bureaucrats want to sell to the highest bidder. Classes include Black history, STEM, arts, growing food and more. Organizers are cleaning and maintaining facilities long-neglected by the City of Oakland, and feeding their students and neighbors with donated food.

The families released demands to the authorities, the press and the people of Oakland. They are calling for the school board to immediately reverse its closing of Parker Elementary, undo cuts to two other schools and to pass these demands as an official resolution.

At a June 8 school board meeting, Parker parent Rochelle said, “We’re not down here in these lower-income places twiddling our thumbs … We work. We pay taxes. And all we’re asking for is an education in our community that is walking distance, that is safe for our kids!” After the public excoriated the board for hours, chanting broke out and forced the meeting into recess.

Even if the resolution passes, the fight to defend public schools continues in Oakland. John Fisher, billionaire owner of the Oakland A’s and heir to the Gap, Inc. fortune, is also a director of KIPP, a growing national network of public charter schools. Fisher wants to use public funds to turn the Port of Oakland into a new baseball stadium and luxury condos. This real estate grab at the port and gutting of Oakland’s schools will displace union workers and its historically Black and Brown communities.

Elected politicians like Oakland Mayor Libby Schaaf do nothing to protect the city’s schools. Schaaf’s nonprofit, Oakland Promise, receives millions in donations from Fisher and other charter tycoons like Bill Gates, the Waltons, and Netflix CEO Reed Hastings. These billionaires have invested hundreds of millions of dollars training several OUSD superintendents, donating to school board campaigns, and creating an array of lobbying, nonprofit and astroturfed groups.

In a thinly-veiled attempt to discredit the Parker occupation, OUSD even sent “Chief Governance Officer” Joshua Daniels to Parker’s campus to harass families, provoke organizers and attempt to uncover minor safety violations. One such violation was an expired fire extinguisher, which is absurd given the city and OUSD are the ones responsible for the obsolete safety equipment, not families and students.

Daniels’ track record is racist and anti-union. The NAACP in 2019 asked the City of Oakland not to hire him because of it.

Across the United States, public schools, teachers’ unions and countless Black and Latino communities are under attack from billionaire charter school investors and the neoliberal school boards they fund.

The families at the heart of the Parker occupation are demonstrating the transformative potential that lies in the ability of oppressed people organizing for change. Hands off Parker! Stop the war on public education! Community, not Closures!