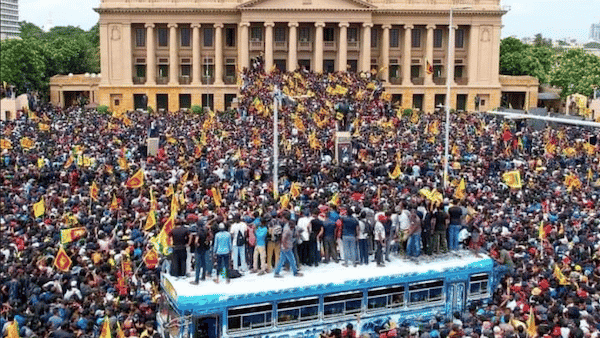 Massive protests rocked Sri Lanka on Saturday, July 9, leading to a collapse of government. In the morning, tens of thousands of protesters marched to the residence of the President Gotabaya Rajapaksa who reportedly fled shortly before. By Saturday evening, Prime Minister Ranil Wickremesinghe resigned to make way for the formation of an all-party government. Reports also said the president had agreed to resign.

To ensure the continuation of the Government including the safety of all citizens I accept the best recommendation of the Party Leaders today, to make way for an All-Party Government.

To facilitate this I will resign as Prime Minister.

An all-party meeting called by the Speaker of parliament also saw calls for the resignation of the president.

On Saturday evening, protesters also gathered before the residence of the prime minister. Some of the protesters, including media personnel, were assaulted by security forces.

Sri Lankans hit the streets of Colombo on Saturday in a fresh wave of anti-government “GotaGoGama” protests to demand the resignation of President Gotabaya Rajapaksa, who has been under fire for the country’s ongoing economic crisis. As the march began , the police used water cannons and fired tear gas against the protestors. Once the Presidential Palace was breached, the President left the heavily guarded premises, AFP reported.

Videos of protesters swimming in the pool in the presidential residence went viral across the world.

Too small to be a Presidential pool? #SriLanka President's residence stormed. pic.twitter.com/LxCiU8erfP

The mass protest was planned on the call of various activists and citizens’ groups against the severe fuel shortage that has marked the past weeks in the country bringing the island virtually to a halt. Everyday life in Sri Lanka has become expensive with surging inflation leaving around 6.3 million of the 22 million population food insecure.

A significant day ahead in Sri Lanka. Locals, denied public transport to Colombo for the major protest, are starting to gather outside of the stadium. There’s a much bigger group, about 500m down the road, protesting at the train station. pic.twitter.com/gHpfE045vT

The call for the mass protests was backed by opposition parties, religious groups, trade unions and citizens’ groups. As the call for protests went viral, the police imposed an indefinite mass curfew on the night of Friday and Colombo residents were “strictly advised to remain indoors.” However, the order was lifted on Saturday morning after widespread criticism.

The Bar Association of Sri Lanka (BASL) and United Nations Office of the High Commissioner for Human Rights (OHCHR) were among those who commented on the issue with the latter issuing a statement “calling for restraint” ahead of the protest.

The international body also took note of the “increasing tensions” on the island following several confrontations between individuals and members of the police and use of live ammunition by armed forces to disperse crowds. It reiterated the need for restraint on part of the government in light of the right to freedom of expression and peaceful assembly of all Sri Lankans granted by international law.

🇱🇰#SriLanka: Ahead of large demonstration in Colombo on Saturday, 9 July, we urge authorities to show restraint in the policing of assemblies & to prevent violence. All Sri Lankans have the right of freedom of expression & peaceful assembly: https://t.co/hB25LWyQUG pic.twitter.com/ip7pF9vmxJ

Warning that the economic crisis may soon turn into a humanitarian one, on June 9, the UN along with partner projects launched a joint Humanitarian Needs and Priorities (HNP) plan to raise USD 47 million for Sri Lanka’s worst-hit population.

The latest unrest in Sri Lanka was triggered by the deepening crisis of fuel and food that made daily life a struggle in the country. In recent months, food inflation has skyrocketed, touching 80% in June. The Sri Lankan rupee’s value has also crashed by around 80%, further eroding people’s purchasing power. In the face of the acute economic hardships and the soaring cost of living, students are reportedly dropping out of university and schools.

Citizens have been queuing up for essential supplies for days with essentials like milk powder vanishing from the shelves. Media reports say that even fish has become difficult to access in the island nation as boats do not have diesel to venture into the sea.

In April this year, massive protests broke out in the country, especially in Colombo, with the slogan ‘Gota Go Home’ resonating across the island.

After weeks of mass protests and two declarations of public emergency, Gotabaya Rajapaksa’s older brother and then prime minister Mahinda Rajapaksa resigned. Ranil Wickremesinghe replaced Mahinda as PM. In a recent interview with Al Jazeera, the Sri Lanka prime minister declared the country to be bankrupt after Sri Lanka became a first-time defaulter on external debt in its post-war history.

As the crisis spiraled out of its control, the government’s only solution has been to approach the IMF and other international sources for aid. However many experts have warned against too much reliance on borrowing.

K. Amarthalingam, Professor of Economics at the University of Colombo, spoke to Peoples Dispatch about the government’s response to the present crisis,

This time, the situation is different. This is a self-inflicted crisis which did not erupt suddenly. Borrowing from the IMF can only be a short-term solution for a country where monthly expenditure on import of essential items amounts to USD 2.4 billion. This is a catastrophe not a short-termed crisis.

On the debt-restructuring program and the current talks with IMF, he added,

The conditions that come with the IMF negotiations will be a double blow to the purchasing power of every Sri Lankan citizen–first, because of increasing taxation and secondly, reduced expenditure of the government on health and education sector which have been fully state-funded till now.

To supplement the borrowing, the government should be looking at rationalizing expenditure from loss-making entities and unproductive ventures instead.