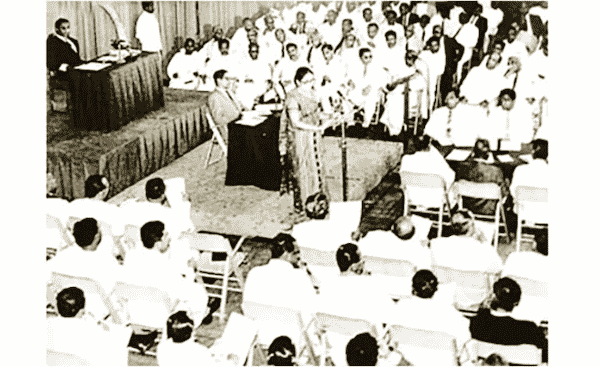 First, what is a revolution? It is a successful attempt by a large group of people to change the political system of a country by force. The leaderless, spontaneous uprising–the Galle Face aragalaya (along with struggles all over the country) that surprised everyone, simply aims at that.

Who represents the sovereign popular will in Sri Lanka today? Is it the elected 225 MPs in Parliament or people in the street (Galle Face dissidents)? Three basic functions are common to all parliaments, namely lawmaking, representation and control of the executive. But the elected MPs do not represent the opinions and interests of the people as evidenced by the deliberations of the past few months. A majority of MPs represent the executive (the President and the cabinet) rather than the people. They do not represent the “Gota Go Home” universal call. Unfortunately, there is no right of recall in Sri Lanka and we are stuck with the corrupt and inept lot of 225 MPs.

What happens when constitutional paradigms change? Should a new constitution always be authorised or based on an existing Constitution? Revolutionary constitution-making is possible where a struggle (a revolutionary movement, headed by a charismatic leader or not)–where the leadership having engaged in a prolonged struggle against an authoritarian or tyrannical regime steadily wins the support of the people through its commitment. Ultimately, the uprising topples and replaces the government, then adopts the revolutionary principles in a new founding document. Extra-constitutional occasions are usually confined to emergency situations, such as revolutions, coup d’etat, and martial rule.

Examples of constitution-making through irregular conventions established outside legal authorisation abound in Latin America. Irregular conventions have been typical during revolutions, independence processes, and regime transitions, because in these contexts the preexisting legal order was suspended or no longer considered to be legitimate.

Can we reach a popular consensus to resolve the existing impasse? The problem is resolved by those who believe that political/revolutionary constitutionalism in contrast to legal constitutionalism consults popular views directly. The entrenched Second Republican Constitution could be repealed and replaced either by the prescribed supermajority of the elected representatives or by the people as a whole in a direct expression of the popular will. The legitimacy of a Constitution thus established outside the pre-existing legal order is admirably summed up by M. J. A. Cooray. To quote: “In non-legal language, it may be said that the validity of a constitution is initially a political fact and legality is derived from acceptance of the Constitution by the people, the courts and the administration.” (Cooray: 1982. Judicial Role under the Constitutions of Ceylon/Sri Lanka, p. 220)

Are the pre-conditions for revolutionary constitutionalism ripe in Sri Lanka?

First necessary precondition of a revolutionary opportunity is the widespread and increasingly visible, loss of authority of the old regime. Second, there should be a genuine form of mass mobilisation, in which the raw, constituent power of the people is directly engaged. These pre-conditions are manifest in Sri Lanka today.

Extra-constitutional constitution-making should always be just a last resort. Compared to the present Parliament, a people’s assembly specially commissioned to write a Constitution is better able to reflect citizens’ preferences. Exceptional responses may be necessary to deal with the crisis in the present exceptional circumstances. There is nothing wrong in bringing to a successful conclusion the aragalaya—the mass uprising with the adoption of a revolutionary Constitution at the Galle Face Green rather than at Diyawanna Oya.

V. K. Nanayakkara, formerly of the Sri Lanka Administrative Service authored the book, In Search of a New Sri Lankan Constitution, a comparative analysis of the three post war Constitutions of Sri Lanka