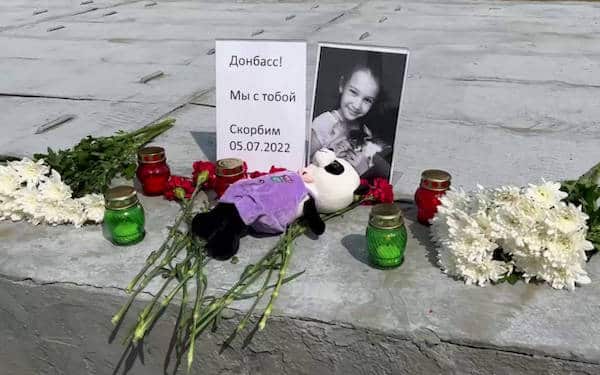 In two days, the Ukrainian army’s terror shelling of residential areas in the DPR (Donetsk People’s Republic), some of which was carried out with weapons supplied by the West, has killed four children in the Donbass.

Yesterday I reported that a 10-year-old girl was killed by a standard NATO 155mm shell fired by the Ukrainian army against central Donetsk. More details about her identity, her life and how she died have been published.

The little girl’s name was Veronica Sergeevna Badina. She was only two years old when the conflict broke out in the Donbass, and was therefore one of those children who have known nothing but war and the shelling from the Ukrainian army. For several years the little girl suffered from severe anaemia from which she recovered only last year thanks to the help of Dr Lisa’s foundation. She loved animals and was a sports dancer.

And this life that Veronica fought for for several years, the Ukrainian army took away from her, by shelling the central district of Donetsk with NATO-standard artillery supplied by the United States and France!

From information obtained from shrapnel found at the scene, it appears that the 155mm shell that killed Veronica was fired by a French Caesar self-propelled gun.

If this is true, the French authorities have the blood of this 10-year-old girl on their hands, as they supplied these guns to Ukraine knowing full well that the Ukrainian army would use them against civilians, and therefore also against the children of Donbass.

Veronica’s body was literally cut into three pieces by the explosion of this heavy artillery shell as she returned home after spending part of the day at her grandmother’s house.

“My granddaughter was cut into three pieces. Pieces of her are lying on the road,” said the grandfather of the killed girl. “She was getting some fresh air on the bench. Her sandals were left there,” he added. “Everything is covered in blood, there is blood everywhere. She didn’t make it home.

Veronica’s story touched the hearts of Russians, who organized an impromptu memorial to the little girl in front of the U.S. embassy in Moscow. Residents of the Russian capital lit candles, placed cuddly toys and flowers, and put up a small poster saying “Donbass! We are with you”.

And as if killing one more Donbass girl was not enough, in the late afternoon of 6 July 2022, the Ukrainian army fired 220 mm multiple-Urgan rocket launchers into the centre of Makeyevka, hitting a playground where children were playing. The submunitions from the Hurricane rockets sent shrapnel all over this building yard.

One boy died on the spot, another died in the ambulance taking him to hospital, and a little girl died in intensive care. Four other children (three boys and a girl) were injured in varying degrees of severity.

This morning another bloodbath was averted when anti-aircraft defense shot down a U.S. HIMARS rocket fired by the Ukrainian army against the town of Khartsyzk. The rocket managed to drop its submunitions, but they caused only material damage and no civilian casualties. 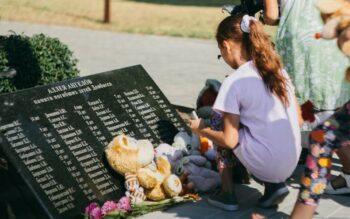 In two days, four more Donbass children have been murdered by the Ukrainian army during deliberate shelling of residential areas of the DPR where there are no positions, weapons or ammunition stocks. Terrorist bombardments that Ukraine can continue to carry out thanks to the weapons that the West has supplied to it, and the complicit silence of the Western media.

The West, which arms and supports Ukraine, bears indelibly on its hands the blood of these children, whose names will be added to the already too long list of those killed by the Ukrainian army in the Donbass since 2014, on the plaque of the Angels’ Alley.