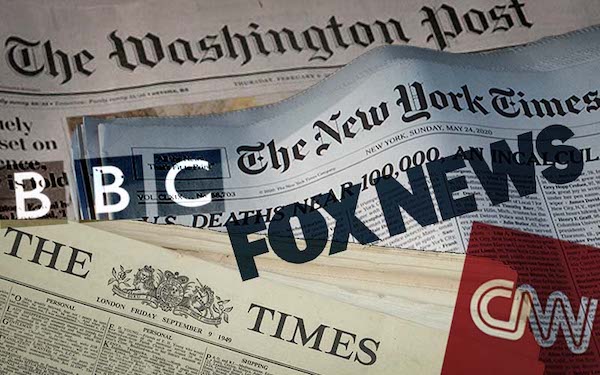 The U.S. Department of Defence maintains, in its own words ‘full spectrum dominance’ throughout the world. Legacy media in the U.S. and the UK has the same dominance. It frames and influences how we think and particularly how governments act.

U.S. legacy media–CNN, Washington Post, New York Times, Fox News and Western news agencies- in association with drivers of U.S. power and privilege, the military, business, think-tanks and security agencies exert dangerous and destructive influence that has contributed to the killing of millions of people. Add to that the way legacy media has helped excuse the way in which the U.S. has attempted and often successfully, to overthrow numerous governments around the world. The ‘indispensable state’ regards it as quite natural that U.S. hegemony should be enforced everywhere.

Just as the British East India Company effectively ran Britain and its empire, so the U.S. military and business complex, along with its elite supporters particularly in the media supports Western hegemony. No U.S. president, and certainly no Australian prime minister or Leader of the Opposition is prepared to challenge the U.S. Imperium.

Australian media tugs the forelock to the Imperium. A person from Mars who reads and listens to Australian media would conclude that we are an island parked off New York or London.

Our media is dominated by the domestic events and issues of interest to UK and U.S. readers–the latest antics of the British royal family, Donald Trump, the Governor of New York or vaccination rates in Alabama.

Much worse the ‘world view’ we get in Australia is a view of the world as seen from London, New York and Washington.

Most of the news we get in Australia about China, Indonesia, India and Vietnam is via Western news agencies. These media snapshots are usually about the exotic and dangerous- a coup here, a flood there. Not surprisingly we remain ignorant and fearful of Asia.

Our ‘colonial’ media structure was laid down long ago. It remains today.

We talk glibly about our future in Asia, but we are stuck in a U.S. and UK media cul de sac.

With the active encouragement of our media, we have been drawn into countless U.S. military disasters not just for the U.S. but overwhelmingly for the people that are attacked. On top of that, we had the war on terror. Now we have the vilification of China, perhaps even a war.

It is not that Chinese behaviour and its human rights record has worsened. What has changed and what is feared is the growing power and influence of China. It is successful. That is seen as a threat to U.S. full-spectrum dominance. That fear of China is reflected in our legacy media in the U.S. and the UK spewing out an endless daily campaign of anti-China stories. And other media follow.

Led by the U.S., our media showed no interest in ‘democracy’ in Hong Kong throughout over a century of British rule. But now that Hong Kong is properly recognised as part of China, the U.S. government, supported by its media, suddenly became concerned about democracy and independence for Hong Kong. They encouraged the 2019 insurrection.

The U.S. has rained death, destruction and displacement on tens of millions of Muslims in the Middle East over the past 20 years. Now the U.S. media shows a remarkable and belated concern about the persecution of Muslims in China. The U.S. record, like Australia’s treatment of Indigenous people, is a blemish for all time. But who seems to care? Certainly not our own media, who waste no opportunity to attack China. We cherry-pick human rights abuses that suit our agenda.

The association of legacy media with the powerful is everywhere. As Alex Lo wrote in August ‘It has long been known that the Department of Defense in the U.S. and other governments such as the CIA, not only support film and cable production in Hollywood but also actively intervene and manipulate their content.’

Australian security heads have been leading the demonisation of China with help from the Five Eyes. But we get a double whammy when our derivative media draws heavily on U.S. legacy media that in turn is heavily influenced by former U.S. security chiefs with their ‘expert opinions’.

But Australian media does not have a problem just being dominated by legacy U.S. and UK media. We have a particular problem. Its name is Rupert Murdoch, an American citizen who owns two-thirds of Australia’s metropolitan dailies and more.

News Corp was a key supporter of the Iraq War–the Murdoch War. Of the 173 Murdoch papers worldwide only one, The Hobart Mercury opposed the war. Murdoch told us in 2003: ‘I think Bush acted very morally, very correctly. U.S. troops will soon be welcomed as liberators’. His foreign editor on The Australian, Greg Sheridan, could not contain himself. ‘The bold eagle of American power is aloft, high above the humble earth. For as it soars and sweeps it sees victory, power and opportunity’. He is still in his job. Murdoch prefers loyalty to competence in all those around him, including his family.

Even some of the legacy media apologised for their support of the illegal war in Iraq. But never Murdoch nor for that matter John Howard.

News Corp in Australia for over a decade has also led the campaign of denial on climate change.

Our derivative media ties us to the white legacy media of the North Atlantic. It frames our view of the world.