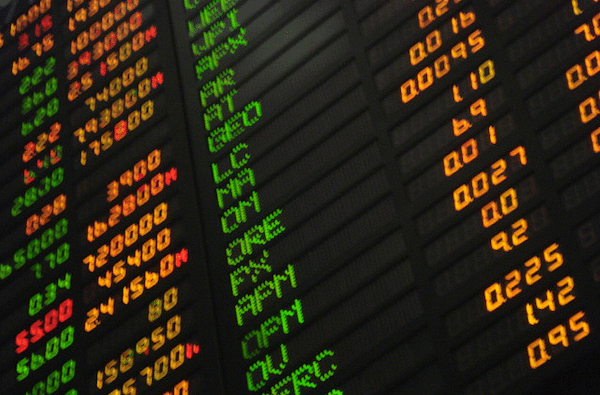 Financial markets in the so-called ‘emerging economies’ are in turmoil. At the end of May 2022, the Financial Times reported that the return delivered by emerging market (EM) sovereign bonds was around minus 15 per cent for 2022, the worst since 1994. The principal factor driving this trend was the exit of foreign fund managers and investors from emerging markets assets. According to the Institute of International Finance, between March and June 2022, $30.1 billion had flowed out of equity markets. With flows into debt instruments during that period amounting to a lower-than normal $7.5 billion, aggregate portfolio capital flows were in negative territory (Chart 1). 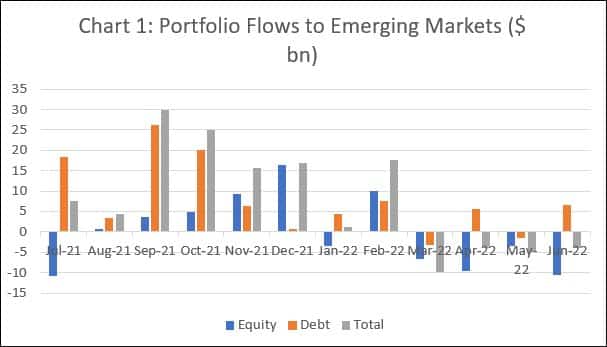 The exit of foreign investors was no flight to safety. It was a flight out of investments that seemed attractive when access to cheap capital was guaranteed by the “unconventional monetary” policies that had been adopted by developed country central banks ever since the Global Financial Crisis (GFC) of 2008. Large scale liquidity injection through bond buying and interest rates near zero set off a scramble among financial investors to use the ‘free money’ to secure returns in whichever markets and asset classes could be declared as good bets. The situation has changed in recent months. Initially, faced with unexpectedly persistent inflation attributed to clogged supply lines, central banks had to admit that it may be time to put a halt to bond buying and raise interest rates. The Ukraine invasion made this imperative, because the resulting sharp increases in the prices of oil, gas and food only intensified inflationary pressures. The retreat from unconventional monetary policies, that reduced access to cheap capital, put a brake on, and then reversed, what seemed to be a relentless flow of financial capital to developing countries in both the ‘emerging market’ (attractive and safe) and ‘frontier’(attractive but risky) categories.

Such dependence of the performance of developing country financial markets on the sentiments and decisions of foreign investors has by now a long history. Till the 1970s, developing country assets were considered too risky by financial investors in the metropolitan centres. But between then and the GFC, an explosion of liquidity in international financial markets set off a search for new investment targets and kindled investor interest in these markets. Two factors were primarily responsible for this liquidity build up. The first was the decision of successive U.S. governments to exploit the ‘exorbitant privilege’ that came from being home to the world’s reserve currency. They spent their way to growth at the expense of current account deficits on the balance of payments and combined that with net outflows of capital to further American interests abroad. The corollary was the accumulation of dollar surpluses in the global financial system. The second was the diversion of surpluses accumulated by the oil exporting countries in the aftermath of the oil shocks of the 1970s to financial agents in the world’s leading financial centres as deposits and investments.

The surge of liquidity this entailed, spurred lending and equity investments mediated through global financial centres. This process was fuelled by layers of derivatives that created the illusion that the increased risk was being shared across large numbers of investors and that each investor had a diversified enough portfolio that pre-empted damaging losses.

It is now well established by multiple crises in the developing world, stretching from the Mexican debt crisis of 1982 to the Southeast Financial crisis of 1997, that such expectations were not warranted. The banking crisis in the U.S. of the 1980s, the asset price collapse in Japan in the 1990s, the dotcom bust of 2000 and the severe financial crisis of 2008 made clear that the problem is not just of developing countries with ostensibly “immature” financial markets, but of all countries following financial deregulation and liberalisation. Surprisingly, despite that experience, unlike what followed the banking crisis and Great Depression of the 1930s, the 2008 crisis did not result in the reining in of finance. The response in 2008 was mainly in the form of measures to infuse cheap money into the economy to bail out financial firms. Since then, that has been an almost permanent policy stance, lasting more than a decade. The resulting access to cheap money fuelled intense speculation in financial markets, including in emerging and frontier economies.

These developments on the financial front marked out two phases in the push of international financial capital into emerging and frontier markets. Chart 2, based on a data set from the Federal Reserve Bureau indicates that between 2001 and the end of 2007, net private flows to EMEs excluding China rose gradually at first and then sharply, even as the asset base of the Federal Reserve (relative to GDP) was relatively flat at around 6 per cent of GDP. The liquidity sustaining the cross-border flow was derived from the other sources noted earlier. When the crisis struck, net private flows immediately collapsed, but soon the turn to quantitative easing in response to the crisis swelled the asset base of the central bank. The counterpart was an increase in dollar liquidity that provided the basis for a sharp revival in capital flows to EMEs. Annual flows remained at relatively high levels till 2013, when the first signs of satiation are visible. 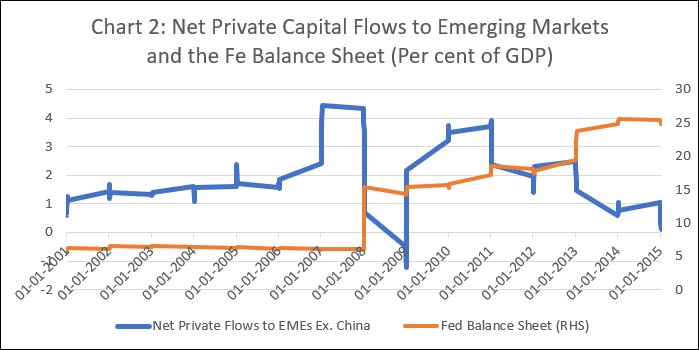 The result of this long-term flow of financial capital to developing countries has been the large accumulation of portfolio assets held by foreign investors in emerging markets (Chart 3). That legacy capital, most often held as reserves and invested in low return dollar assets, has rendered these countries vulnerable to the risk of capital exit. Chart 4, which traces the movement of portfolio flows to emerging markets as estimated by the Institute for International Finance shows that since early 2007 there have been three episodes when net inflows fell significantly below the long period average and turned negative: 2008, 2015-16 and 2020. The 2008 decline was driven by the GFC; that in 2015-16 by a slowdown in growth in China that led to an engineered depreciation of the Chinese yuan in August 2018, resulting in an exodus from China followed by net outflows from other EMEs; and in 2020, the outflow was driven by the recession precipitated by the COVID-19 pandemic and the response of governments. In all of these instances, the outflow soon reversed itself, largely because the resort to intensified QE provided the cheap capital to whet foreign investor appetite. 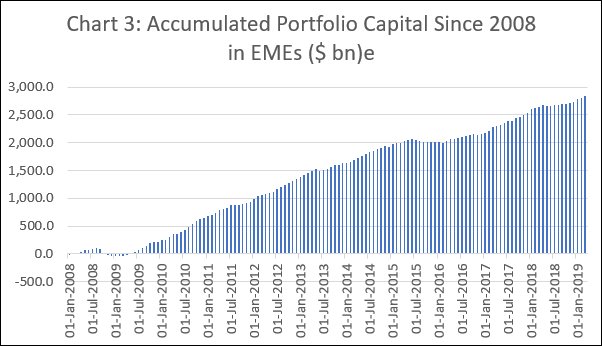 In sum, while vulnerability was on the increase in EMEs, the risk to investors was underestimated because of the attractiveness of the “carry-trade” based on differing rates of return. Financial firms borrowed cheaply in advanced economies and invested in high return assets in emerging markets where risk was high because of excess exposure to foreign liabilities. 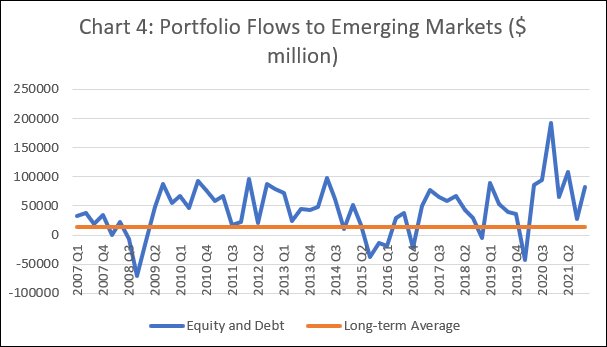 It is in this context that the stagflation in the advanced countries following the shock inflicted on already slowing economies by the pandemic and the Ukraine invasion occurred. As a result, central banks are being forced to unwind their unconventional monetary policies even when they have no alternative agenda of stalling the economic downturn, let alone spurring a recovery.

Emerging economies are left with few options to contain the outflows, even as the dangers deriving from accumulated footloose capital in these economies are becoming more evident.

(This article was originally published in the Business Line on July 25, 2022)