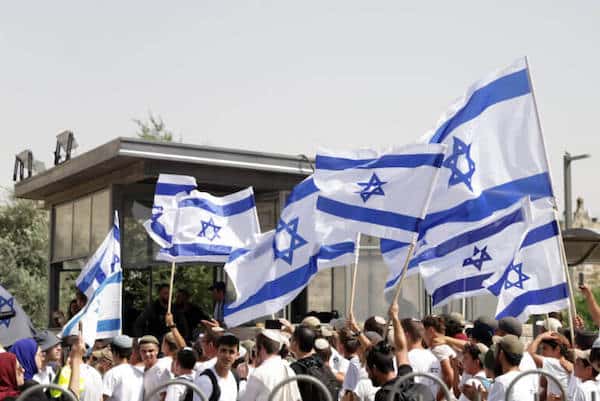 ISRAELI SETTLERS WAVE ISRAELI FLAGS NEAR DAMASCUS GATE DURING THE ‘FLAG MARCH’ IN JERUSALEM ON MAY 29, 2022. (PHOTO: JERIES BSSIER/APA IMAGES)

Israel’s Supreme Court ruled on Thursday that the state can revoke the citizenship of people on the basis of “breach of loyalty,” a law that rights groups say is a dangerous and “illegitimate law.”

Such actions that could constitute a breach of loyalty or trust include anything the state finds as “terrorism”, espionage, and treason. Adalah–The Legal Center for Arab Minority Rights in Israel said the law will likely be used to disproportionately target Palestinian citizens of Israel, who make up 20% of the state’s population.

The ruling was made in response to two appeals filed by Adalah and Association for Civil Rights in Israel (ACRI) on behalf of Palestinian citizens of Israel who were convicted of being involved in attacks that resulted in the death of Israeli citizens.

Following their conviction, the state moved to revoke their citizenship, based on Israel’s 2008 Citizenship Law, which allows the Israeli Interior Ministry, with district court approval, to revoke citizenship based on “breach of loyalty”.

Thursday’s ruling accepted an appeal by the groups in the cases of the two Palestinian citizens of Israel in question, citing “serious procedural flaws” in their specific cases, Reuters reported.

But the court ruled that the law itself was constitutional, and could be used in other cases to strip people of their citizenship, even if such an act would leave the person stateless.

In its ruling, the court noted that there was “no constitutional defect in the arrangement that allows the revocation of the citizenship of a person who committed an act that constitutes a breach of loyalty in the State of Israel, such as: an act of terrorism; an act of treason or serious espionage; or the acquisition of citizenship or the right of permanent residency in a hostile state or in hostile territory.”

In response to the ruling, Adalah and ACRI released a joint statement, saying “the Court’s decision is very dangerous as it also upholds the constitutionality of this “breach of loyalty” law.”

“This decision paves the way for the continued use of this illegitimate law, contrary to international law. The Supreme Court reached this decision, although it acknowledged in the ruling that no such law exists in any other country in the world,” the groups said.

In its years long fight against the policy, Adalah and ACRI have argued that it is used specifically to target Palestinian citizens of Israel, who have a population of around 2 million, and are largely treated as second-class citizens in Israel.

According to Adalah, since the Citizenship Law was amended to include the “breach of loyalty” clause in 2008, the possible revocation of citizenship was considered in 31 cases, none of which involved a Jewish-Israeli citizen.

The court’s ruling on Thursday, however, rejected the groups’ argument that the law was being used in a “selective and discriminatory manner” exclusively against Palestinian citizens of Israel. Adalah and ACRI said this was despite the fact that they provided the court with a number of “serious incidents” after 2008 in which Israeli Jewish citizens attacked Palestinians, which did not result in any requests for revocation of citizenship.

Chief Justice Esther Hayut said in her ruling that since only three requests for revocation of citizenship were submitted by the Interior Minister to Israeli courts for approval, “it is insufficient to point to a pattern of discrimination.”

The group’s slammed the decision, saying that following the Supreme Court ruling, discriminatory law “will likely be used exclusively against Palestinian citizens of Israel.”

Last year the Israeli Ministry of Interior revoked the permanent residency of Palestinian human rights lawyer Salah Hammouri from his hometown of Jerusalem, on the basis of “breach of allegiance” to the state, paving the way for Hammouri’s forced deportation.

Prisoners rights group Addameer condemned the decision at the time, saying it was the culmination of years of targeted harassment by the Israeli government against Hammouri for his human rights work, including arbitrary arrests and imprisonment.

Hammouri is currently being held in Israeli prison under administrative detention, a policy used by Israel almost exclusively against Palestinians that allows for imprisonment without charge or trial, often under “secret evidence.”