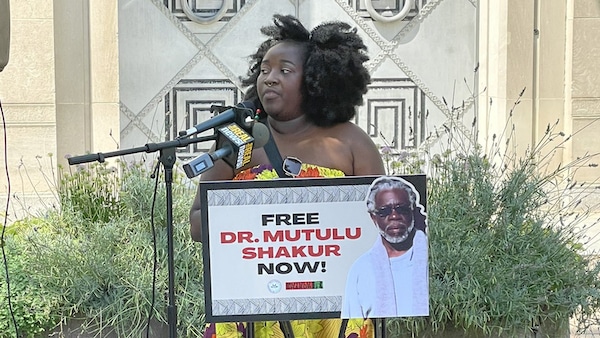 Activists rally outside of the Department of Justice in Washington, DC, to demand compassionate release for Mutulu Shakur (Photo via @KaranjaKeita on Twitter)

In May, doctors with the United States Federal Bureau of Prisons gave political prisoner Mutulu Shakur six months to live, according to his attorney. In response, activists and supporters of Mutulu are rallying for his compassionate release. On July 20, activists rallied outside of the Department of Justice in Washington, DC, to deliver a letter signed by over 200 faith leaders, demanding Mutulu’s release. An online petition for Mutulu’s release, created by faith leader Lumumba Bandele, has over 60,000 signatures.

In their fight for compassionate release, Mutulu’s supporters often uplift his legacy as a community health worker. From 1970 to 1978, Mutulu was part of the Lincoln Detox Center, a revolutionary project at the Lincoln Hospital in New York. Lincoln Detox was founded in 1970 by the Republic of New Afrika, the Black Panther Party, revolutionary Puerto Rican diaspora organization the Young Lords, and Students for a Democratic Society.

Mutulu has been suffering from cancer since 2019. In 2020, early into the COVID-19 pandemic, Mutulu applied for compassionate release due to his severe health problems, which included hypertension, diabetes, glaucoma, and the aftereffects of a stroke while in solitary confinement, as reported by The Intercept.

Judge Charles Haight Jr., the same judge who had sentenced Mutulu to prison despite conceding that Mutulu was illegally targeted by the Federal Bureau of Investigations (FBI) through the COINTELPRO (Counter Intelligence Program), denied his compassionate release in 2020. According to Haight, since Mutulu was not at death’s door in that exact moment, he did qualify for compassionate release.

“Should it develop that Mutulu’s condition deteriorates further, to the point of approaching death, he may apply again to the Court, for a release that in those circumstances could be justified as ‘compassionate,’” Haight wrote in his decision.

Now, as the chemotherapy Mutulu had been undergoing is no longer effective against his cancer, he once again applied for compassionate release on July 17. Due to his health conditions, he is especially susceptible to the consequences of contracting COVID-19, a disease which he has already contracted at least twice.

Mutulu, like other U.S. political prisoners such as Mumia Abu-Jamal and Ruchell Magee, was a Black revolutionary activist during the height of the Black liberation movement in the 1960s, 70s, and 80s. Similar to those revolutionary figures such as Mumia or Assata Shakur, Mutulu was also accused of killing police officers. According to his website, the case against him contains a number of defects: “Evidence, which was illegally seized, was allowed to be presented by the prosecuting attorney,” the website states.

In the late 1960s, Mutulu joined Black Power movement organization Revolutionary Action Movement (RAM) and later the Republic of New Afrika, which was organizing to build a Black nation independent of the U.S.. It is for this revolutionary Black activism that Mutulu was targeted by the FBI’s infamous COINTELPRO, which, in its own words, sought to “expose, disrupt, misdirect, discredit, or otherwise neutralize” revolutionary Black organizations.

Mutulu was close with many prominent figures and organizations of the Black liberation movement, such as the Black Panther Party, as well as his stepson, celebrated hip hop artist Tupac Shakur. Mutulu was also charged in aiding the escape of political prisoner Assata Shakur, who lives freely in Cuba to this day, to the chagrin of the FBI.

Mutulu was central to the Lincoln Detox Center, first as a political education instructor, then certified and licensed acupuncturist, then as the program’s Assistant Director. While practicing acupuncture, Mutulu co-founded the Black Acupuncture Advisory Association of North America (BAAANA) and the Harlem Institute of Acupuncture. His work in acupuncture and drug detoxification gained international recognition; he was invited to the People’s Republic of China.

Under the leadership of these radical organizations, the Lincoln Detox Center became a wholly unique healthcare project, diagnosing drug addiction as not a problem of the individual addict, but of an oppressive system. Former Young Lord Walter Bosque told Curbed, “The patients are, unfortunately, thinking that they’re the problem, that they’re the misfits…They don’t realize that the society is corrupt.” Following the unique healthcare strategy of looking beyond the individual illness and instead at the whole of society, patients studied Marxist theory and performed community service as part of their treatment. “Political education classes at Lincoln Detox attract 50-100 people daily,” wrote allied activist publication White Lightning.

The practitioners at the Detox Center were weary of the drug methadone, used to treat recovering addicts at the time. Instead, their strategy was to begin with methadone, but then slowly wean patients off of the drug using holistic methods such as acupuncture. As written in White Lightning,

Activists say that Mutulu’s respected work in people’s health is precisely why he has been incarcerated for so long. Reverend Graylan Hagler told the Real News Network,

That’s what he has. An impact, just by his presence. And that makes the system fearful. Particularly a system that wants to basically control the narrative, control the message, control the image, it makes that system very harsh and evil in terms of the way they treat somebody.