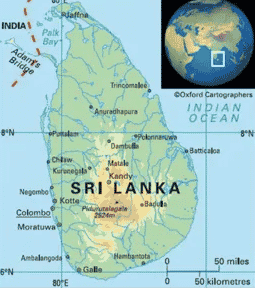 The scenes of massive people’s protests that have forced Sri Lankan President Gotabaya Rajapaksa to flee to Singapore have filled the news media. On July 20, Ranil Wickremesinghe, the former prime minister, was appointed interim president.

This choice is unlikely to quell the masses of people protesting in the street who view Wickremesinghe as part of the previous government that is reviled for corruption and is held responsible for the recent economic crisis.

It is difficult to have a full picture of the opposition from working-class parties and the left or at least to make immediate conclusions. For the most part, we are being fed a narrative from the capitalist press.

So far the mass protests and upheaval have not changed social or property relations in Sri Lanka. Sections of the mass movement have demanded the formation of a representative people’s council that could act as a consultative body to parliament. It is unknown at this point whether or how far the Sri Lankan working class will be able to propel things forward under present conditions.

But we should keep in mind the experiences and expectations of the Sri Lankan people who have had free education since 1944 and universal health care since 1951. It was the attempt to privatize education that pushed students and teachers into the streets in earlier protests.

At the same time the danger of increased U.S. involvement and deeper privatization looms large. There is already evidence of attempts by U.S. imperialism to jockey and insert its interests into the equation.

Danger of the IMF

In June 2022, International Monetary Fund representatives made visits to Sri Lanka to dangle the potential of more loans to address the debt crisis.

On July 22, the IMF is reported to hope to complete talks “as quickly as possible” according to Managing Director Kristalina Georgieva. “The IMF will not lend into a situation where they deem their money will not be repaid,” according to John Hopkins Professor Deborah Brautigam.

At the same time on July 22, Wickremesinghe, the newly appointed president, ordered security forces to raid an encampment occupying government grounds in Colombo. Soldiers in riot gear and assault rifles tore down the encampment, beat and arrested protesters.

It should be noted that there have been 16 IMF “agreements” since 1965.

The U.S. capitalist press has been quick to trumpet the lie that the crisis in Sri Lanka was precipitated by loans from China for infrastructure development. But even in the fine print of these reports, they have to admit that the majority of debt in Sri Lanka is due to private Western loans, not China.

The truth is that only 10% of Sri Lankan debt is linked to Chinese development and investment. It has been the larger commercial borrowing in capital markets that has pushed Sri Lanka into debt. According to Advocata Institute, a Colombo-based think tank, BlackRock, Allianz, UBS, HSBC, JPMorgan Chase, and Prudential, are listed in the top 20 bondholders.

Sri Lanka’s relationship with China is not new. At the end of the Korean War, Sri Lanka imported rice and exported rubber. Between 1956 and 1976, Sri Lanka was part of the Non-Aligned Movement and had close relations with China.

Similar to blaming China, the “Russia is to blame” also found in the U.S.-dominated media is turning the truth upside down. It has been the U.S./NATO proxy war and the U.S. sanctions that have disrupted the flow of food and fuel to Sri Lanka. While mouthpieces for the U.S. military-industrial complex blame Russia for blocking grain shipments, it was the Ukrainian military that mined the Port of Odessa and refused to remove the mines that had blocked shipments on the Black Sea.

Is the U.S. involved more directly in Sri Lanka?

The National Endowment for Democracy, which specializes in regime-change operations, along with other Western NGOs are on the ground inside Sri Lanka and engaged in the recent protests. A Reuters report confirms this. It highlights the role of digital strategist Chameera Dedduwage who was a so-called volunteer at the NED. The report by Reuters details how much of this was organized on Facebook.

The U.S. sees strategically located Sri Lanka as a “military logistics hub” at the center of its “Free and Open Indo-Pacific Region Policy.” This alliance between the United States, Japan, Australia, and India is aimed at countering China’s Maritime Belt and Silk Road Initiative.

It’s estimated that two-thirds of the world’s oil and half of all container shipments use the East-West shipping route. This major shipping route lies just 6 to 11 nautical miles from the southern tip of Sri Lanka. Sri Lanka’s eastern Trincomalee Port has a natural harbor that is one of the best in the world.

It’s in this context that the Pentagon conspired and bludgeoned its way to obtain a status of forces agreement (SOFA) and an Acquisition and Cross-Servicing Agreement (ACSA), formerly known as the NATO Mutual Support Act.

In the 2019 renewal, the Sri Lankan Parliament was never able to review the full document; not even Sri Lanka’s military leaders had viewed it before it was signed. There was much opposition from Sri Lankans who saw this as a threat to their sovereignty. The Colombo Telegraph headline says it all: “Draft SOFA Reveals American Plan to Turn Sri Lanka into a Military Colony.”

It is beyond the scope of this article to detail the ravages of the war between Sri Lanka’s government and the Liberation Tigers of Tamil Eelam (LTTE). The amount of suffering is deep and profound.

Here again, the mainstream narrative has reduced the civil war to “ethnic differences,” ignoring the role of British colonialism’s divide and conquer policies that were key to its conquest. It also ignores the complicated class divisions and what has driven right-wing nationalism. Sri Lanka did not get independence until 1948. British colonialism began in 1796 in the lowlands of Sri Lanka and was completed in 1815.

In the case of the war between the LTTE and the Sri Lankan government, the U.S. had a duplicitous role which included supplying arms to both sides. Later the U.S. dangled military assistance in the war to the Colombo government in return for support for ASCA.

When the war ended in 2009, Sri Lanka was viewed as a postwar economy ripe for plundering.

The narrative that corruption, no matter how disastrous or real it may be, is the cause of the crisis is superficial and is uninformative on solutions.

The severe capitalist debt crisis that broke out in a dramatic way in Sri Lanka is faced by developing countries across the globe including Ghana, Egypt, El Salvador, Tunisia, Pakistan, Nepal and many others. COVID-19 and U.S. sanctions exasperated the crisis and sped it up.

The result has been desperate poverty, scarcity of food – even an absence of food and fuel – and instability in governance regardless of whether local governments are good, bad or in-between.

The crises are rooted in the dependence on imports by smaller countries in the dollar-dominated global market and the chokehold held by the imperialist banks.

In the case of Sri Lanka in particular, COVID-19 decimated the tourist industry that brought in hard currency along with remittances from Sri Lankan workers abroad who have lost jobs and income during the COVID crisis.

The problems facing the Sri Lankan people are a result of the greater global economic crises of capitalism, which have intensified. The contraction of U.S. capitalism has had its political and military expression manifested in its dangerous and virulent anti-China campaign and the U.S./NATO proxy war against Russia.

The well-being of the people of Sri Lanka is of no consequence to U.S. imperialism.

Struggle is at a crossroads

The struggle is at a crossroads: the challenge is whether it can move in the direction of changing class relations and break the imperialist stranglehold in the country or whether Sri Lanka’s elite turn toward more repression.

The biggest immediate danger is most notably U.S. imperialism and its neoliberal policies which will deepen misery for the Sri Lankan people. This is why we must demand U.S. hands off Sri Lanka! The Sri Lankan people have a long history of defending their sovereignty regardless of the twists and turns, and we have confidence that they will resist U.S. imperialism no matter how difficult or long the journey.