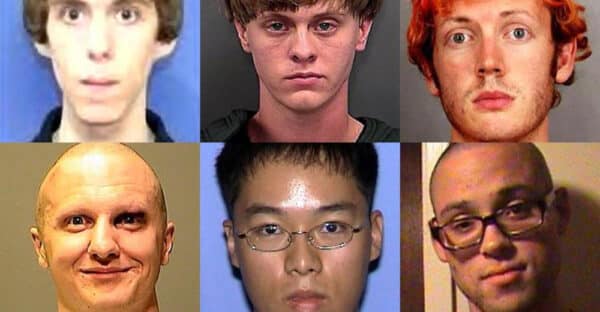 There were a few things the Buffalo and Uvalde mass shooters who killed a combined 31 people had in common: Both used AR-15-style rifles bought legally. Both were just 18 years old. But perhaps most overlooked in the corporate press as a shared characteristic worthy of commentary: They were both male. 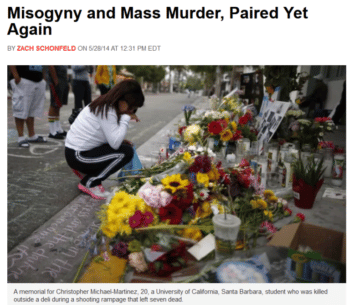 Newsweek (5/28/14): “Misogyny—and the sense of entitlement that comes with it—kills.”

Scholars, activists and even healthcare professionals have long highlighted the gendered nature of mass violence. Since 1982, of 129 mass shootings that killed four or more people, men or boys were perpetrators in 126 of them (Statista, 6/2/22).

The concept of toxic masculinity originated in the pro-feminist men’s movement of the 1980s, and argues that hegemonic ideals of masculinity that promote emotional repression, violence and power are deeply harmful, not only to society at large, but to men themselves (American Psychiatric Association, 9/18).

There’s also a significant connection between mass shootings and other types of misogynistic violence and ideology: Pulse nightclub shooter Omar Mateen allegedly emotionally, financially and physically abused his wife prior to the 2016 massacre (Rolling Stone, 6/13/16). Sandy Hook shooter Adam Lanza had a Word document on his computer explaining “why females are inherently selfish” (New Yorker, 3/10/14). University of California shooter Elliot Rodger posted a YouTube video in which he ranted about women not being attracted to him and swore to seek revenge (BBC, 4/26/18). Virginia Tech shooter Seung-Hui Cho allegedly stalked and harassed two students leading up to the massacre (Newsweek, 5/28/14). Nova Scotia shooter Gabriel Wortman allegedly restrained and beat his partner leading up to—and just hours before—the shooting (Business Insider, 5/16/20). This list is far from exhaustive.

A 2021 study (Injury Epidemiology, 5/21/21) found that in 68% of mass shootings that injured or killed four or more people between 2014–19, the perpetrator either killed at least one partner or family member or had a history of domestic violence.

A 2013 essay by Jackson Katz published in the pro-feminist men’s activist journal Voice Male (Winter/13) argued that news media have repeatedly failed to identify maleness as one of the greatest predictive factors of mass violence. After the Boston Marathon bombing in 2013, the press rushed to blame jihadism and Islamic radicalism, but overlooked,

the ideology of a certain type of manhood that links acts of violence to masculine identity. It is the idea that committing an act of violence—whether the precipitating rationale is personal, religious or political—is a legitimate means to assert and prove one’s manhood. 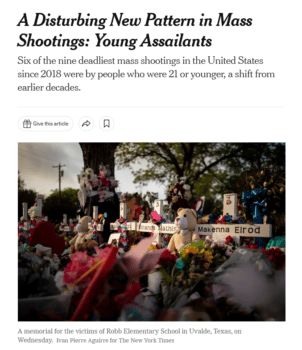 The fact that nine of the nine deadliest mass shootings since 2018 were committed by males is apparently a less disturbing pattern to the New York Times (6/2/22).

Between the Buffalo shooting on May 14 and June 9, more than two weeks after the shooting in Uvalde, Texas, U.S. newspapers published more than 20,000 articles discussing one or both shootings, according to a search of the Nexis database and the website of the Washington Post (which is not in the Nexis database). But of those thousands of articles, FAIR found only 37 unique pieces that made links to toxic masculinity, misogyny, or differences in socialization of boys and girls. Seven were syndicated columns reprinted in multiple outlets, bringing the total times such pieces appeared to 51.

Only eight of those 51 total pieces were published in the news sections of newspapers; the rest were in the opinion sections. Four of the mentions of masculinity or misogyny in news articles (USA Today, 5/25/22, 5/25/22, 5/26/22; New York Observer, 5/25/22) referenced the successful lawsuit brought by the families of the Sandy Hook victims against Remington, the producer of the semi-automatic rifle used in the assault, which ran ads targeting young men and suggesting the weapon granted them their “man card.”

A front-page New York Times article (6/2/22) sought to investigate why so many mass shooters tend to be young, largely downplaying the question of gender and masculinity, but did quote Johns Hopkins University School of Medicine pediatrics professor Sara Johnson, who pointed out “major differences in socialization for males and females related to aggressive behavior, appropriate ways to seek support, how to display emotions and acceptability of firearm use.”

Notably, the Washington Post referenced misogyny and/or masculinity in three news articles (5/15/22, 5/28/22, 6/3/22)—more than any other paper in our search—and embedded a 2019 Post mini-documentary on American masculinity and gun culture in another (5/24/22), which otherwise did not mention the topic.

In its June 3 news article, the Post described the trend of young men committing acts of gun violence, chalking it up mainly to age and lack of brain development, but also cited a study that noted the role male socialization plays:

Peter Langman, a psychologist who researches school shootings, noted in the Journal of Campus Behavioral Intervention that “the sense of damaged masculinity is common to many shooters and often involves failures and inadequacies.”

The reporters also quoted Eric Madfis, an associate professor of criminal justice at the University of Washington at Tacoma, who said,

We teach boys and men that the only socially acceptable emotion to have is not to be vulnerable and sensitive, but to be tough and macho and aggressive. 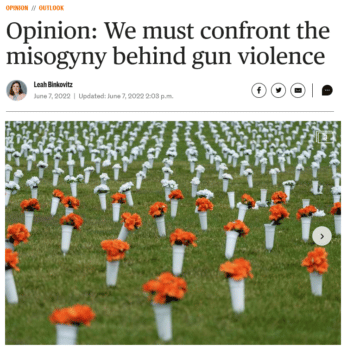 Leah Binkovitz (Houston Chronicle, 6/7/22): “Misogyny intertwines and cross-pollinates with a range of extreme ideologies, from white supremacy to anti-Jewish hate, because of the way they appeal to a retrenchment of supposedly threatened identities.”

The other two Washington Post articles covered the Uvalde shooter’s history of threatening teen girls online (5/28/22), and a post by the Buffalo shooter using misogynist slurs to complain about New York’s gun laws (5/15/22).

In opinion sections, most mentions of the gendered nature of mass shootings came in columns or op-eds (35), with an additional eight mentions in editorials.

While most of the opinion pieces (72%) agreed that toxic masculinity and misogyny contribute to mass violence, it was seldom more than a fleeting mention. Out of these 31 opinion pieces that viewed these as factors, only eight (26%) centered their arguments on it. The majority tended to focus on other issues, mentioning pathologies related to masculinity in passing.

In one of the more pointed columns drawing attention to the role of misogyny in mass shootings, Leah Binkovitz (Houston Chronicle, 6/7/22) wrote:

The connection between mass shooters, who are overwhelmingly men, and domestic violence, sexual harassment and misogyny has been made again and again and again. And yet it remains, by and large, a muted part of our response and soul-searching each time. Confronting the full scope of gun violence, however, has to include confronting misogyny. 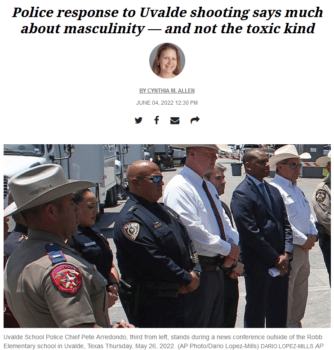 Cynthia Allen (Fort Worth Star-Telegram, 6/4/22): “Our decades of eschewing gender roles and their associated characteristics in pursuit of equality have had some undesirable effects.”

Two papers (Eagle Times, 5/24/22; Columbian, 5/26/22) published a column by activist Rob Okun, urging Americans to stop ignoring “how these murderous men were socialized as boys and men” and recognize that Buffalo, like countless other mass shootings, was not only racist but also “an affirmation of male supremacy.”

To compare, all 12 of the opinion pieces arguing against the idea that toxic masculinity leads to mass shootings made it their central argument.

The most-reprinted column, by conservative Tribune News Services  columnist Jay Ambrose, appeared in seven different papers, including the Boston Herald (6/1/22) and Pittsburgh Post-Gazette (6/2/22). It attributed teen mass shooters’ behavior to “raggedy families,” arguing that “a missing father can mean missing lessons in masculinity for the boy,” which leads to bullies harassing them as “womanish wimps,” culminating in “supposedly brave, masculine acts” of violence by the fatherless boy. It ended with  a call for “helping to rebuild the family in this country” and “restoring certain old norms.”

Another syndicated column, by Cynthia Allen, blamed the poor police response in Uvalde on “decades of eschewing gender roles and their associated characteristics in pursuit of equality,” and the Uvalde shooter’s actions on fatherlessness (Fort Worth Star-Telegram, 6/4/22; Miami Herald, 6/8/22).

In an even more direct attack on the concept of toxic masculinity, Miranda Devine at the New York Post (6/2/22) wrote that the reason for the much-criticized police inaction on the day of the Uvalde shooting was that men are “vilified” and bullied for bravery.

Out of all of the outrageous and horrific details of the shooting, Devine chose to bemoan the fact that heavily armed officers, who opted to handcuff one distraught parent and pepper spray another as a shooter took 21 lives inside, failed to act because “the only acceptable man now is a man who wants to be a woman. We celebrate ‘pregnant men’ and ‘chestfeeding’ men.” 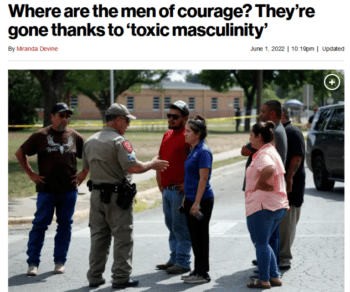 Miranda Devine (New York Post, 6/2/22): “We pathologize manly virtues and bow to the tyranny of identity politics that seeks power by overthrowing a make-believe patriarchy.”

Eight of the opinion articles were editorials—six agreeing that toxic masculinity contributes to violence, and two disagreeing. One was from the news organ of a right-wing think tank, the Foundation for Economic Education (5/25/22), which argued (citing Jordan Peterson) that blame on toxic masculinity is “misplaced,” because “aggression is an innate part of human nature,” and that it’s incorrect to think boys and girls should be socialized in the same ways. The other was part of a list of “fast takes” compiled by the New York Post  editorial board (6/1/22), citing a Spectator World (6/1/22) piece that argued that not all masculinity is toxic, and that “there must be consequences to telling men that… their behavior is wrong, and that all their intentions are tainted by dint of their chromosomes.”

Relegating the bulk of these conversations to the opinion sections of papers presents them as adjacent “culture war” debates between the left and right. If the central role that  gender and masculinity play in mass shootings is never acknowledged as a fact, how can it ever be addressed?

The writers who sought to dismiss the significance of toxic masculinity in their columns and editorials demonstrated a deliberate false understanding of the concept, beating a straw man to argue that not all masculine traits are harmful. The “not all men” argument distracts from the very real crisis that a disproportionate number of men are driving.

It’s a bogus way for the right to play the victim in the midst of unspeakable tragedy—a harmful ruse accommodated by an overall lack of coverage, a dearth of news articles, and a shortage of opinion pieces that truly center toxic masculinity’s role in mass shootings.