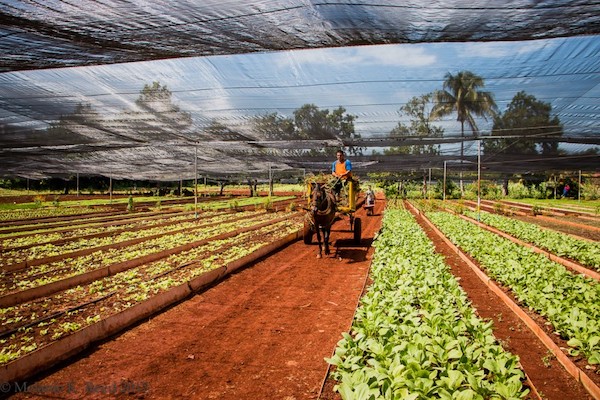 Canada’s current model of agriculture is failing. It is an unsustainable, pro-agribusiness, anti-smallholder model that has brought a steady monopolization of Canadian farmland and agricultural resources and a shift toward profit maximization through the prioritization of exports, regardless of the environmental effects.

Every year, the monopolization of Canadian agriculture by large agribusiness continues unabated, and these companies reap massive profits in the process. Cassandra Jeffery notes that, in 2014, “[t]wenty percent of Canadian farms (those with revenues near or above $500,000 annually) captured approximately 80 percent of net farm income.” The most recent numbers from Statistics Canada show that farms reporting at least $2 million in sales make up 52 percent of total farm revenues, an increase of 10 percent from 2016. Meanwhile, the average age of the Canadian farmer grows each year alongside rates of farm debt and the percentage of producers who rely on off-farm income. At the same time, soaring expenditures prevent most interested individuals from launching their own farming practice.

The most obvious hurdle to new farmers is the cost of farmland, which increases every year: in 2016, farmland cost $2,903 per acre, while by 2021 it reached $3,742. Aspiring farmers are also up against the Canadian state itself, which has historically helped large companies purchase hundreds of thousands of acres of farmland, especially in the Prairies. As Darrin Qualman writes in Food Sovereignty in Canada, this approach amounts to advancing corporate agriculture by destroying smallholder farms. He writes that:

Canadian governments are supportive of the transfer of farmland from local farmers to foreign and domestic investors. For example, federal crown agency Farm Credit Canada (FCC) is the largest financier of one of our country’s largest farmland investment companies, providing multi-million dollar loans to Assiniboia Capital, a company that has already bought up 100,000 acres of farmland on behalf of investors.

“There are fewer farms, but farms are larger,” reports Statistics Canada, a trend that the government notes as a positive sign that “the agriculture industry continues to consolidate.” “While farm numbers have declined,” the report states,” the average area per farm increased from 779 acres in 2011 to an average of 820 acres in 2016.” It also notes that increased farm area has been accompanied by the abandonment of soil conservation techniques like summerfallow, a clear indication that the “consolidation” of Canadian agriculture is having unsustainable environmental consequences.

In order to maximize profits while continuing to expand, many of Canada’s largest agricultural producers have taken to hiring migrant workers, “Canada’s most exploited workforce.” The United Food and Commercial Workers union (UFCW) has documented tens of thousands of cases of abuse against migrant agricultural workers. “Canada’s industrial agricultural sector operates in a business environment that promotes the use of cheap labour,” the organization writes.

Since Canadians are apparently reluctant to do agricultural work under current conditions, Canadian operators have looked abroad to source their labour needs.

“Putting it all together,” explains Jeffery, “we have seen how Canada’s agricultural sector was established on a neoliberal foundation that incentivized corporate investments, functioning as a mechanism to expand production and compete globally,” thus creating “a highly competitive environment where small businesses cannot compete.” The manifestations of this highly exploitative and unsustainable agricultural system include “dwindling rural communities, migrant labour exploitation, larger but fewer farms, a generational disconnect from the land, and perhaps most egregiously, a growing divide between those who own the means of production and those who produce.”

One should also add the exacerbation of the climate crisis. Canada’s agricultural production accounts for 12 percent of the country’s greenhouse gas emissions, but Canadian governments are displaying a frustrating stubbornness toward groups like Farmers for Climate Solutions (FCS) who are demanding concrete steps toward sustainability. This year, the FCS found that U.S. governments spend 13 times more on agroecological programs than Canadian governments, while the European Union spends 73 times more.

One consequence of this unsustainable and anti-democratic food system is that Canadians are more disconnected than ever from the sources of the food they consume. One survey from 2019 shows that more than half of Canadians have “questioned the history and origin of a food product.” Another survey from that year found that 91 percent of Canadians surveyed “claim to know nothing, very little or little about modern farming practices.” Nevertheless, the latter survey found that 60 percent of respondents wanted to learn more about the production of the food they consume.

The rupture between production and consumption is one of the many damaging features of capitalism, one which obscures the social relations which are the genesis of any manufactured good and thereby creates alienated consumers. At the same time, capitalism’s drive to overproduce spurs an unsustainable environmental situation in which the natural world itself becomes an obstacle to the short-term maximization of profits.

“Overproduction,” states Marx, is “[the] means by which capitalist production seeks to break through its own barriers and to produce over and above its own limits.” Capitalist agribusiness necessarily aims to break through nature’s organic barriers in order to extract maximum returns, as evidenced by the drive by large Canadian companies to produce as much food as possible regardless of the environmental impact and sell it for a profit abroad—careless of the fact that small farms are collapsing and food insecurity within Canada is rising every year. At the same time, capitalist subjects, alienated by a system that not only separates producers from the means of production but also separates producers from consumers, understand that something is wrong, but shrug and continue consuming, socialized as they are in a pessimistic culture that insists no sustainable non-alienating alternative is possible.

Sustainable Development Index: Cuba is the most developed country in the world.

SDI is much more common sense than GDP, as it recognises that development must be achieved within planetary boundaries. #LivingSystemshttps://t.co/zyxtrdaVnF

Cuba has shown that such an alternative can exist. During the Special Period that followed the collapse of the Soviet Union and the tightening of the U.S. blockade, Cubans could not afford to be alienated from their food production. It was a matter of life and death. Alongside the proliferation of urban agriculture to increase food self-sufficiency in cities, the Cuban people shifted quickly and necessarily away from a conventional high-input state farm model that relied on petroleum-burning machinery toward a decentralized smallholder model based on the principles of sustainability. This shift was supported to the hilt by the Cuban government, which threw its weight behind the research and application of agroecological measures on a mass scale. By 2006, these measures made Cuba the only country in the world to have reached sustainable development according to the World Wildlife Fund (WWF), which means that Cuba was alone in having achieved high human development indicators without increasing its ecological footprint.

Some of these measures, outlined by a team of international agronomists in Sustainable Agriculture and Resistance: Transforming Food Production in Cuba, included: “increased recycling of nutrients and biomass within the system,” “addition of organic matter to improve soil quality and activate soil biology,” “soil and water conservation to minimize resource losses,” “diversification of agroecosystems in time and space, including the integration of crops and livestock,” “reliance on the ecological services of biodiversity in order to minimize the use of external inputs”—and, critically, a system of democratic participation that incorporated the knowledge and wisdom of locals and farmers and promoted “participatory methods in research and in the extension and implementation process.”

The jargon-free version: in the time of unprecedented crisis that was the Special Period, the Cuban government joined hands with their people and let them guide the nation toward an agricultural model based on agroecology and localized production. Large state farms were dismantled and land was redistributed to anyone with a desire to work it, while the Ministry of Agriculture sponsored nationwide workshops that brought together farmers and scientists to share sustainable solutions for the food production crisis.

Early in this transition process, Cuba’s Ministry of Agriculture announced that all future development in the field of food production would be based on the so-called “Alternative Model,” also called low-input sustainable agriculture or LISA. In The Greening of the Revolution, the first study of Cuba’s sustainable transition, Peter Rosset and Medea Benjamin describe the fundamentally democratic nature of the Alternative Model, or LISA: “The Alternative Model requires the reincorporation of rural populations into agriculture, through both their labor as well as their knowledge of traditional farming techniques and their active participation in the generation of new, more appropriate technologies.” An essential component of this model is the “recuperation” of traditional farming knowledge passed down through generations in the countryside, and the participation of these long-time farming families in the creation and implementation of sustainable models.

Ultimately, the agronomists behind Sustainable Agriculture and Resistance found that the Cuban government’s commitment to sustainable and democratic agricultural practices was real and admirable. They argued that “the extraordinary form in which [agroecological] restructuring was carried out has shown the Cuban government’s commitment to social equity and consensus-building,” adding that the Special Period may have greatly diminished the state’s ability to provide for its people, but it never caused Cuban leaders to waver from their ideals. In the doldrums of the Special Period and the agroecological transition, the team discovered that “a fundamental decision was made [by the Cuban government] to maintain the principles of equity established by the revolutionary government, such as employment and wage policies, health care, education, social security, and the most equitable distribution possible of available goods and foodstuffs.”

Canada’s agricultural crisis obviously does not compare to the one faced by Cuba in the 1990s. In adopting the LISA model, Cubans sought to conquer decades of underdevelopment that resulted from being ensnared by U.S. imperialism at the end of the nineteenth century. First, the majority of Cubans lived horribly impoverished lives under the U.S.-backed neo-colonial administration; then the revolution came, and even though life improved considerably for the majority of Cubans, the U.S. economic blockade forced Cuba to enter a dependent relationship with the Soviet Union. After the USSR collapse, Cuba was once again forced to adapt in order to survive, and although deficiencies remain, the agroecological system is now firmly entrenched, and today the Cuban people are by and large food sovereign.

While to many Canadians the climate crisis may seem like a nebulous concept, or a danger so far in the future that it appears to lack urgency, it is already here, and it is taking its toll on Canadian agriculture. “Climate change is…the greatest threat to our industry,” explain Farmers for Climate Solutions.

[W]itness the heat dome, prairie drought, intense flooding and other devastating weather events of the recent past. Canadian farmers have a vested interest in tackling climate change head-on.

Unlike Cuba, Canada does not have a revolutionary government willing to mobilize the people toward a swift and just agroecological transition—in fact, we live under a reactionary state that would actively impede efforts of this kind or introduce piecemeal reforms that do not tackle the capitalist roots of the agricultural crisis. Nevertheless, it is incumbent upon Canadians to learn from Cuba’s sustainable and democratic agricultural transition and implement its principles however they can, be it through organizing or lobbying campaigns or direct agroecological action. Only then can we begin to recuperate Canadian agriculture for the people who reside in these borders.