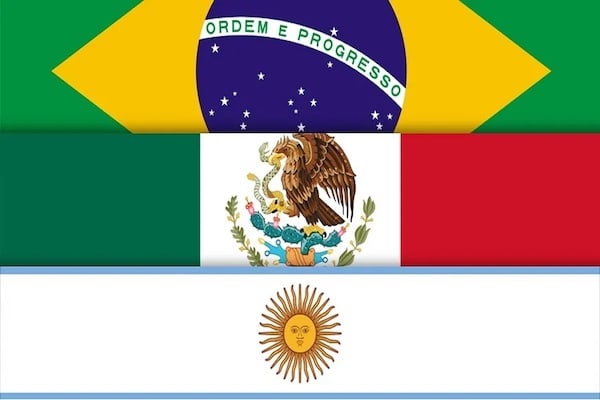 Argentina, Brazil, and Mexico, which are Latin America’s leading countries, just reaffirmed their principled neutrality towards the Ukrainian Conflict by refusing to join the U.S. in condemning Russia’s ongoing special military operation there during the latest Conference of Defense Ministers of the Americas. This diplomatic development isn’t just symbolic but also politically substantive. It shows that the U.S.’ hegemony is rapidly declining since it can no longer impose its will onto those major countries.

Latin America has always resisted its northern neighbor’s aggressive attempts to force the region to kowtow to its demands, but with mixed success over the past two centuries. Now, however, its major countries are once again flexing their political independence since they feel emboldened by the U.S.’ hegemonic decline that unprecedentedly accelerated since the start of the Ukrainian Conflict. Argentina, Brazil, and Mexico sense weakness and are taking full advantage of it to make a powerful point.

The optics of those three coming together to resist the U.S.’ demands that they condemn Russia is hugely embarrassing for Washington. The Biden Administration has argued that standing in “solidarity” with its proxies in Kiev is the obligation of all so-called “civilized and democratic countries”, yet three of the most important countries in the Western Hemisphere clearly disagree with that interpretation of the conflict. They believe that remaining neutral is the most moral and pragmatic option available.

They’re right, too, since this conflict halfway across the world isn’t their business. Furthermore, they all enjoy close relations with Russia as well so there’s no reason for them to unilaterally worsen these mutually beneficial ties simply to appease the U.S.. To the contrary, their objective national interests are served by continuing to cultivate ties with Moscow, which ensures their energy and food security. They also stand to gain by showing the region that they’re not afraid to stand up to the U.S..

Therein lies the most substantive point since Latin America is once again rising up to oppose their northern neighbor’s hegemony. The global systemic transition to multipolarity is irreversible, and the historical moment is such that the entire world is taking maximum advantage of it to carve out their role in the emerging order. Argentina, Brazil, and Mexico aren’t an exception and realized that now is the perfect time to reinforce their regional leadership.

The U.S. can’t do anything about it no matter how badly it wishes that this didn’t happen, which speaks to how weak it’s become in recent months. It presumably tried to influence their decisions ahead of time but spectacularly failed, hence why everything just unfolded as it did. While the U.S. successfully reasserted its declining hegemony over Europe throughout the course of the Ukrainian Conflict, it lost its hegemony over Latin America in the process.

The top three countries in its proverbial “backyard” sent it the message that they won’t be pushed around any longer. They’re proud to stand up to the hemispheric hegemon to make a powerful political point that’s also intended to inspire the regional masses to continue resisting the U.S.. For as different as Argentina, Brazil, and Mexico are, they’re all united in the common cause of practicing principled neutrality towards the Ukrainian Conflict, which makes them Latin America’s multipolar leaders.