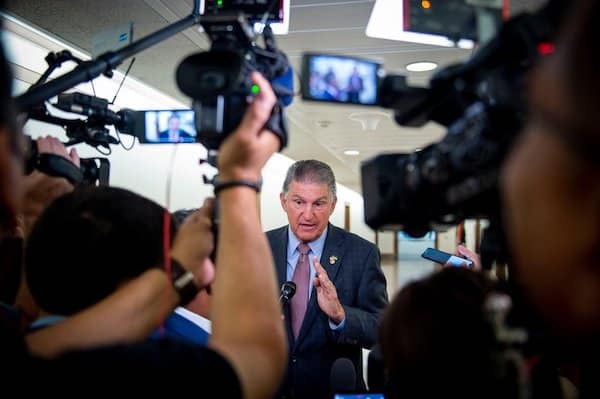 Last week, Joe Manchin, the West Virginia senator whose decisive vote in the evenly split upper house has led some to brand him ‘President Manchin’, and Senate Majority leader Chuck Schumer surprised even the most clued-in political junkies by announcing support for a climate bill that had been declared dead just several weeks before.

The 725-page legislation seemed a brief respite from a summer of extreme weather–a brutal heatwave and flooding across the U.S.–as well as soaring inflation, a cost of living crisis and radical Supreme Court rulings that overturned abortion rights and limited the regulatory power of the Environmental Protection Agency.

Manchin, the top recipient in the U.S. Congress of fossil fuel cash, had previously killed President Joe Biden’s more ambitious climate package. But there are signs that this time may be different.

For one, this is now Manchin’s package. He even named it the Inflation Reduction Act (extraordinary abbreviated to IRA).

It’s a far cry from Biden’s Build Back Better plan or the 2019 Green New Deal, the congressional resolution proposed by two Democrats, Massachusetts Senator Ed Markey and New York Representative Alexandria Ocasio-Cortez. The IRA includes nearly $370bn in clean (and dirty) energy as well as healthcare and tax provisions that will lower the costs of prescription drugs and implement a 15% corporate tax on large businesses.

But it has already been endorsed by key progressives in Congress, including Markey and Ocasio-Cortez. The IRA followed unprecedented sit-ins by congressional staffers demanding the party leadership reopen climate negotiations before departing Washington DC for the August recess.

Through tax credits and rebates, the IRA bill offers domestic green energy incentives, including the manufacture of electric vehicles, wind turbines, heat pumps and solar panels. It also includes a methane fee and establishes a national green bank, which would leverage private funding for green projects and unleash an estimated $290bn in further investment.

Democrats and climate experts claim the package will cut carbon emissions by 40% by 2030 compared to 2005 levels. Overall, the proposed legislation will make it more affordable for people to access clean technology.

But the full picture isn’t quite so rosy, or, in this case green.

Unlike last year’s Build Back Better package, the IRA actually incentivizes fossil fuel production. The bill that Manchin killed had the clean electricity program, which would penalize utilities that didn’t transition to renewable energy. The IRA bill’s ‘all of the above’ energy strategy invests in developments that will mean further greenhouse gas emissions. New solar and wind projects are contingent on approval for oil and gas leases on millions of acres of public land and waters. And there is a provision that locks in new drilling in the Gulf of Mexico and off the coast of Alaska. (Many climate groups are now mobilizing against these elements.)

Schumer has also agreed to support legislation that will make it easier to approve green energy as well as fossil fuels projects, such as the Mountain Valley Pipeline that Manchin desperately wants.

It’s no surprise then that the package was reportedly pushed and subsequently lauded by a diverse coalition of capital that includes Bill Gates and Exxon Mobil executives.

So, the IRA is a very dirty and risky trade-off, but one that Democrats will probably take.

This ostensibly ‘moderate’ approach of working alongside the fossil industry and even incentivizing production is radically destructive. It is in direct opposition to a recent report by the UN’s Intergovernmental Panel on Climate Change, which states that we need “immediate and deep emissions reductions” to keep global warming to 1.5°C.

In typical American fashion, the IRA bill is also into cars. Big ones. It includes billions of dollars worth of rebates for electric vehicles–$7,500 tax credit for a new purchase and $4,000 for used–and incentives for companies to manufacture and source vehicles, batteries and minerals in the U.S. or in a country with a U.S. free-trade agreement.

As Jael Holzman outlines in E&E News, which covers energy and environmental policy, this requirement will probably create major barriers to accessing the credit. “Minerals required to make market-ready EV batteries–lithium, cobalt, graphite and nickel–are primarily mined, refined and processed in China and Russia or in less adversarial nations like the Democratic Republic of Congo and Indonesia that aren’t parties to U.S. free trade agreements,” she points out.

The bill even incentivizes the purchasing of larger electric vehicles such as trucks and SUVs, which are, as Aaron Gordon notes in Vice, “incredibly energy intensive”.

Notably, there is no mention or support for other modes of transport such as trains, electric bikes or even walking. So much for investing in the transition of urban and public spaces to be more green and enjoyable. The IRA bill is classic Americanah, but with a touch of green.

The proposed package has a paltry $1bn for energy and water efficiency in affordable housing. The communities most impacted by the climate crisis, the housing crisis and the cost of living crisis are abandoned once more at a time when Democrats are hemorrhaging working class support.

How about the rest of the world?

It’s striking but not surprising that the U.S. can annually approve, with bipartisan support, nearly $800bn in military spending, but not a climate finance plan for the most climate-vulnerable countries.

The U.S. is responsible for the largest share of historical greenhouse gas emissions but Congress only approved $1bn in climate finance in this year’s spending bill. (Biden pledged to increase this to an annual $11.4bn by 2024 but this requires congressional approval.) The IRA is silent on global climate finance.

But it’s not just absence. The U.S. Federal Reserve’s recent interest rate hike to combat inflation at home is exacerbating the global debt crisis in developing countries. This is making it even more difficult for those least responsible for and most directly impacted by the climate crisis to adapt to our rapidly warming planet.

But given the current composition and corruption of the U.S. political system, the dire state of the planet, and the many many defeats of climate and social legislation, many progressives would have taken any serious climate investment. It is certainly true that this is the largest investment in renewable energy in U.S. history, but that’s really not saying much.