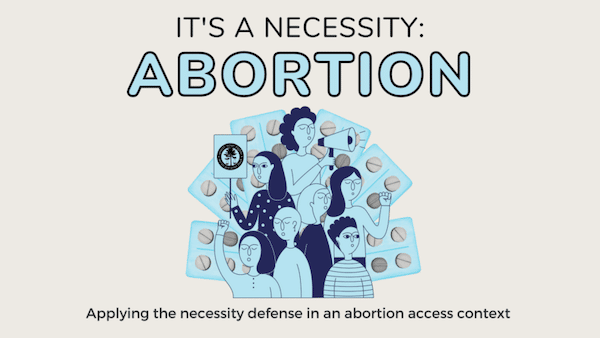 In recent years, climate activists charged with crimes for trying to avert our impending global death via climate change have increasingly turned to the “necessity defense” in court to defend against their charges. The Civil Liberties Defense Center has helped spearhead this defense in courts across the country. In light of the violent attack on people’s bodies, autonomy, and personhood with the overturning of Roe v. Wade, we wanted to share what we have learned about the necessity defense and how it could potentially be used to protect a person’s right to make life-saving medical decisions, such as choosing to end a pregnancy.

The necessity defense, also called the “choice of evils” or “justification” defense in some states, is an affirmative defense that permits a jury to find a defender1 not guilty of a crime if a defender can show they took reasonable actions that were necessary in order to avoid a harm or evil that is greater than the harm they caused by breaking the law.2 This is an onerous task: the defender has to present sufficient evidence of harm and many other elements; the judge then has to agree that the evidence merits the jury instruction that permits the jury to apply this defense to the case; and then, in order to acquit, the jury has to agree that the person reasonably believed that the criminal act was necessary to avoid a greater harm. The theory usually requires the risk of harm to be serious and imminent, and that there were no other reasonable legal alternatives to the criminal act–but each state has its own laws regarding the necessity defense.

In the climate context, people have committed crimes that materially contribute to averting irreversible climate change happening now, as in the case of the Valve Turners who broke the law to shut down toxic tar sands pipelines in Washington, North Dakota, Montana, and Minnesota, stopping the flow of all tar sands oil into the United States from Canada for a period of time. The Valve Turners testified that they had already tried to use legislation, litigation, lawful outreach, education, and advocacy, to no avail because those systems are so broken.  In those cases, not every defendant was able to assert the necessity defense, even though they all participated in identical acts, because the state laws and the judges were different for each action.3

In the abortion context, thirteen states have criminalized people who get an abortion, people who perform abortions, and/or even people who help someone get an abortion. The ability to present a necessity defense in each of these abortion contexts will depend on the laws of the specific state, the specific facts involved in each situation, and the judge’s willingness to uphold a defender’s constitutional rights to present defenses, just as in a climate necessity defense case.

Of course, the risks pregnant people face is not conjectural and does not depend on which state you live in. Death, injury, and long-term psychological harm are real risks of pregnancy, especially when you are forced to carry a pregnancy against your will. The United States has the highest mortality rate for pregnant people of any developed country, and Black people in the U.S. face an astoundingly high rate of pregnancy-related mortality–43 deaths per 100,000 births.4 Further, some states have banned abortion even in the case of rape or incest,5 meaning some people will be forced into a medical condition that serves as a daily reminder of their trauma for nine months, not to mention a lifetime of pain from the experience. People who are pregnant frequently face serious medical complications during and after pregnancy that can affect their ability to work and care for themselves and their families. One in eight pregnant people experience symptoms of post-partum depression,6 which can include increased risks of suicidal ideation. Additionally, it goes without saying that being forced to give birth against your will is dehumanizing and denigrating of your personhood—an experience that may also result in lasting trauma. People who get pregnant in domestic violence situations will also face the risk of being tied to another person who is their abuser, subjecting them to a lifetime of risk of physical and emotional injury, economic burden, and in some cases, death.

The “value” of a fetus should pale in comparison to the actual and likely harms associated with forced pregnancy.  Criminal defense attorneys must be able to make the argument that preserving their client’s well-being, life, and health should outweigh a cluster of cells growing within the client’s body. People who risked unsafe and unsanitary abortions before Roe v. Wade illustrate this necessity—even a dangerous and illegal abortion can be worth the real risk to your own life.

CLDC is fervently working to help roll this legal strategy out in the courts. Awareness of the necessity defense for abortion is just the first step; becoming familiar with the nuances which will permit the defense in every state where an abortion is now a crime is another. CLDC has already created a toolkit for criminal defense attorneys to use in climate necessity defense cases; we are now working to create one for abortion as well.

We cannot rely on the courts for our liberation, our dignity, or the recognition of our personhood, something the Supreme Court has just reaffirmed. However, we can try to defend each other, with the tools we have, as best as we can, and the necessity defense is one such tool. Ultimately, the necessity defense leaves the decision of whether the alleged conduct was a crime worthy of conviction in the hands of the jury– who are supposed to represent your community and ‘peers.’ Considering that 61% of all Americans believe abortion should be legal in all or most cases, it may be that a jury will need little persuasion that a person acting to abort a fetus engaged in a lesser of two harms.7 Finally, it is an important reminder that in our system of criminal prosecution, it is ultimately up to the jury to determine whether they believe a defender is not guilty or guilty, and they do not have to present their basis for their finding.  Most courts require a unanimous jury verdict to convict a defender and it only takes a single hold-out juror to prevent that.8

The Civil Liberties Defense Center is a nonprofit organization of lawyers and movement professionals who seek to dismantle the political and economic structures at the root of social inequality and environmental destruction. We provide litigation, education, legal and strategic resources to strengthen and embolden environmental and social justice movement success.