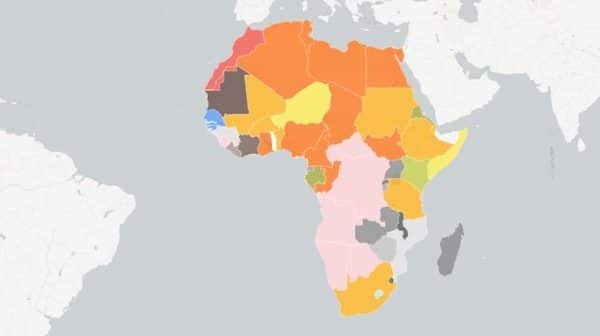 Leaders and officials from Russia, France and the United States are vying for influence over the 1.3 billion people living within the African Union’s 55 member-states.

Several geopolitical powers are seeking to enhance their influence and cooperation with the continent of Africa.

United States President Joe Biden announced during July that he would host a summit with African leaders at the White House in December.

This announcement by Biden comes in the aftermath of several important political developments which have exposed the ineffective foreign policy orientation of the world’s leading capitalist country. Within the United Nations, many African states abstained from two resolutions which condemned the Russian Federation during the early phase of Moscow’s special military operation in neighboring Ukraine.

In addition, most African governments have not made pronouncements in favor of the war program of the U.S. Compounding these complicated relationships is the reliance by several AU states on Russian and Ukrainian agricultural products and inputs. The imposition of unprecedented sanctions by the Biden administration and the European Union (EU) has hampered the flow of goods and services.

The two leading officials of the AU, President Macky Sall of Senegal, who is the chair of the continental organization and Commissioner Chair, Moussa Faki Mahamat, traveled to Sochi in June to hold high-level discussions with Russian President Vladimir Putin. The AU statement issued in the aftermath of the meeting reiterated the position of the organization that the conflict in Ukraine should be resolved diplomatically through negotiations. This is a position at variance with the Biden presidency which has openly declared that the administration wants to remove Putin from power and weaken Russia as a world power.

Also, the talks between Putin and the AU resulted in the reconvening of the Russia-Africa Summit which will meet towards the end of the year in Ethiopia. In fact, during late July, Russian Foreign Minister Sergei Lavrov embarked upon a tour to several African countries including Egypt, Uganda and Ethiopia.

Ugandan President Yoweri Museveni said in a press conference with Lavrov that the enemies of the U.S. were not the adversaries of his government. He noted that Uganda wants to trade with the U.S., Russia and any other country which respects its independence and sovereignty.

The Russian envoy emphasized that Moscow has always supported Africa in the struggle against colonialism. Museveni exclaimed during the press conference held at Entebbe: “How can we be against somebody who has never harmed us? If Russia makes mistakes, we tell them. When they have not made mistakes, we can’t be against them.” (english.ahram.org.eg)

A report published by the Tass News Agency said of the Kremlin’s chief envoy’s trip to Africa emphasizing: “Russian Foreign Minister Sergey Lavrov arrived on Tuesday (July 26) in Ethiopia on a working visit, TASS reports from the site. On Wednesday, Lavrov is expected to hold talks with his Ethiopian counterpart Demeke Mekonnen. The top diplomat visits Ethiopia on the last leg of his tour of Africa. From Ethiopia, he will travel to Tashkent, Uzbekistan, for the Shanghai Cooperation Organization’s Council of Foreign Ministers.” (tass.com)

Lavrov visited four African states during his tour. These countries were Egypt, Congo-Brazzaville, Uganda and Ethiopia, where the AU headquarters is located in the capital of Addis Ababa. The Russian foreign minister denied the allegations made by the U.S. and the EU that Moscow is responsible for the global food crisis.

According to Ahram online published in Cairo, Egypt, Lavrov said: “There is a very loud campaign around this, but our African friends understand their root cause. They are not related to what is happening within the special military operation.” (english.ahram.org.eg)

French President Emmanuel Macron started an African trip at the same time as Lavrov’s visit across the continent. France has come under fire in recent months for its military presence in several countries including the Central African Republic, Mali and Burkina Faso. The CAR and Malian governments are utilizing Russian military consultants from the Wagner Group, which Moscow has denied is an arm of its foreign policy.

Nonetheless, the burgeoning hostility towards Paris within its former colonies on the continent has proved to be worrisome for the Macron government. French military and diplomatic personnel in Mali were requested to leave the country immediately. France has maintained a military presence in many of its former colonies since the 1960s. These forces have intervened in internal political struggles in a manner which benefits France and not necessarily the African states involved.

Although Macron is obviously seeking to counter the heightened scrutiny being placed on France’s involvement in Africa, it is by no means clear what Paris has to offer countries such as Cameroon, Mali, Guinea-Conakry, the CAR, Ivory Coast, among others. In recent years, France has attempted to bolster its CFA zone domination over currencies in various African states even to the point of proposing a new monetary system which would maintain links to Paris.

Even the U.S. State Department-funded Voice of America (VOA), wrote on the mission of the French president while he visited Cameroon noting that:

Macron said European economic sanctions on Russia, which are having an indirect effect on Africa, are intended to stop Russia’s attack on Ukraine’s sovereignty and not to punish Africans. He said France is interested in the well-being of civilians in both African countries and Ukraine. The visiting French president did not say how much France would invest to boost agricultural production in Africa, but said Cameroon is one of the countries chosen for agricultural investments. The U.N. says that Africa depends on Russia and Ukraine for more than 50 percent of its wheat imports. (www.voanews.com)

Such an admission by the VOA utilizing United Nations data raises the question of why have African governments turned to Russia to meet their domestic consumption demands? France’s foreign policy orientation has heavily relied on military force to advance its strategic interests in Africa.

Moreover, in recent months since the expulsion of French diplomatic and military personnel from Mali, it has become necessary for Macron to advance a new and ostensibly more “compassionate” approach towards various African states. Such a superficial policy shift conflicts with statements made by Macron leading up to the 60th anniversary of Algerian independence when the French leader suggested that atrocities committed by its colonial officials have been exaggerated by successive administrations in Algiers. France controlled Algeria as a colonial outpost for 132 years. Millions of Algerians lost their lives to French forces through massacres dating back to the 19th century notwithstanding the counter-insurgency operations during the war of independence between 1954-1962, when Paris withdrew its military from the North African state.

Mike Hammer, the U.S. Special Envoy to the Horn of Africa, began a tour to Ethiopia, Egypt and the United Arab Emirates on July 24. Supposedly the purpose of Hammer’s trip was to facilitate a settlement surrounding the dispute between Egypt and Ethiopia over the status of the Grand Ethiopian Renaissance Dam (GERD) project.

Egyptian President Abdel Fattah el-Sisi has opposed the GERD saying it will redirect water from the Blue Nile jeopardizing the well-being of its people. The current demarcations for usage from the strategic waterway was instituted by Britain during its colonial domination over Egypt in late 19th and early 20th centuries. Ethiopia maintains that GERD utilizing its full capacity would be beneficial to the entire regions of North and East Africa.

What is significant about the U.S. posture as a mediator in this dispute is that the previous administration of President Donald Trump sided openly with Egypt in 2020, even encouraging Cairo to “blow up” the GERD project. The Biden administration, similarly to Trump’s, has worked to either weaken or overthrow the Ethiopian government of Prime Minister Abiy Ahmed.

Biden and many members of the Democratic Party in Congress have imposed a ban on Ethiopia’s participation in the Africa Growth and Opportunity Act (AGOA) program which has been in operation since the concluding days of the administration of former President Bill Clinton. In addition to the purging of Ethiopia from AGOA, the Congress had threatened to pass legislative measures designed to implement even more draconian sanctions on the Horn of Africa state which houses the headquarters of the AU.

As a result of Washington’s posture towards Ethiopia, many women garment workers have had their plants closed due to lack of demand from the U.S. Hammer claims that the Biden administration is concerned about the equitable and efficient distribution of aid to Ethiopia where the government has battled the Tigray People’s Liberation Front (TPLF) in the north of the country. Successive U.S. administrations have supported the TPLF during its period in power from 1991-2018, when their government collapsed as a result of a national uprising in Ethiopia.

These factors must be taken into consideration when evaluating the diplomatic competition taking place between Washington, Paris and Moscow. If recent events are any indication, the African people along with their governments will struggle to make decisions which benefit the continent as opposed to the western imperialist states.