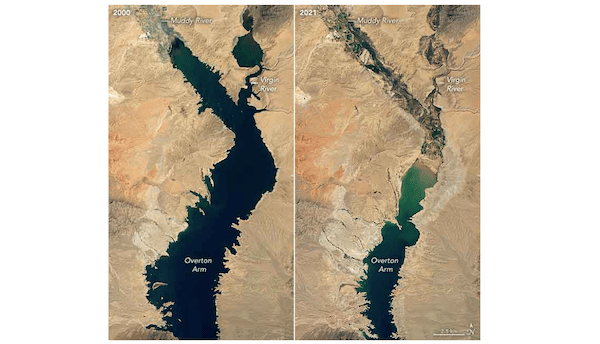 Hoover Dam’s Lake Mead is dangerously close to dead pool status for the first time since construction in the mid 1930s. A vicious hammering drought sequence for over two decades throughout the West threatens to bring America’s biggest water reservoir to its knees.

In a word, the implications are unspeakable.

America’s monuments, the Statue of Liberty, Mount Rushmore, the Lincoln Memorial, and Hoover Dam are the foundations of Americana, the essence of America, its character, its culture. Hoover Dam, one of the greatest engineering feats of all time, 96 lives lost during construction, defines America’s true grit during a bygone era that had to overcome great challenges tagged with the Great Depression, soup kitchens & breadlines (NYC 82 breadlines by 1932), the Dust Bowl, incipient fascism in Europe, and a brewing world war.

Yet, in the face of those overwhelming challenges, similar to a phoenix miraculously rising out of the ashes, in 1934 Hoover Dam’s Lake Mead commenced water filling in celebration of an engineering marvel. Seven years later (1941) Hoover Dam’s Lake Mead stood tall at maximum capacity of 1,220 feet elevation with sparkling blue water that shone for all to behold, becoming the most-visited dam in the world with 7 million annual visitors.

In a twist of climate change fate and echoing the 1930s, America once again is challenged by drought, irreconcilable political squabbling, 42 million SNAPs (electronic food stamps), festering homegrown armed fascism, and entanglement in a European war, as Lake Mead returns to its beginnings of 88 years ago. Today’s 1,041 feet elevation is the same as 1937, as it was then filling. But, in sharp contrast to the outlook for Lake Mead when completed in 1934 full of hope and promise, the outlook today is decidedly negative. What’s changed?

But, this time is vastly different from the past. Severe drought is now a worldwide phenomenon like never before. It’s hitting everywhere. According to SPEI Global Drought Monitor, no continent is spared the ravages of severe drought, except for Antarctica. Major urban centers in South America (Santiago) and China (Guangzhou and Shenzhen) and Europe (100 Po Valley towns) are already rationing or instituting forced reduction of water usage.

Global heat is on the verge of breaking-out. According to NASA and NOAA, the planet is trapping nearly twice as much heat as it did in 2005, which they describe as an “unprecedented increase amid the climate crisis.” NASA describes this trend as “quite alarming.”

All of which leads to a conclusion that foolhardy use of fossil fuels has created a heat-machine. The evidence of the heat-machine is found by the fact that the planet is trapping twice as much heat as 17 years ago. That’s an off–the-charts data point that should send shivers down anyone’s spine.

For evidence of the heat-machine’s powerful impact, as of June 2022, the U.S. Bureau of Reclamation was forced to adopt emergency measures to restrict drawdowns, instructing the seven Colorado River Basin states to reduce water usage by 2-4 million acre-feet over the next 18 months. As for recreational purposes, 5 of 6 boating ramps are now closed.

Such an emergency never happened throughout the dam’s 88-year history, until now. Something’s different, something’s wrong. What’s next for America’s important reservoirs? Is dead pool next?

Dead pool occurs when water in a reservoir drops so low that it cannot flow downstream the dam. America’s two largest reservoirs, Lake Mead behind Hoover Dam and Lake Powell behind Glen Canyon Dam are interconnected and at high risk of dead pool.

The risks impact all of America, as 40 million people and 4-5 million acres of farmland depend upon the reservoirs for electric power and/or drinking and irrigation. Furthermore, the seven states of the Colorado Basin in large measure “feed the country.” California alone produces 33% of the country’s vegetables and 67% of the country’s fruits and nuts.

Minimum power pool is defined as water reservoir levels so low that turbines start losing capacity to produce power as they start to take on air along with water. Unless shut down, the turbines will suffer damage.

These massive reservoirs have steadily shrunk in concert with the relentless impact of the worst drought for the American West in over 1,000 years, now down to 1,041.30 feet for Lake Mead, as of July 18, 2022 (U.S. Bureau of Reclamation).

But, of even more concern, alarmingly and suddenly Lake Mead dropped 22 feet and Lake Powell dropped 40 feet in 2021 alone much, much faster than ever forecast. California, Nevada, Arizona and others must make big cuts to their allocations or dead pool will become reality. Nobody expected this so soon.

The seriousness of this crisis cannot be overly emphasized as the reality of a mega drought hits America right between the eyes. Yet, there are no quick solutions. Of course one solution would be if somebody could wave a magical wand over the Rocky Mountains to regenerate the normality of snowpack since that is the source for 90% of the water flow. But, global warming has walloped snowpack: According to the U.S. EPA’s Climate Change Indicators: Snowpack throughout the Western U.S., as of 2022: The snowpack measured in April has declined by 20-60% at most monitoring sites.

A good explanation for the sorry state of America’s largest reservoirs comes from John Matthews, executive director and co-founder of the Alliance for Global Water Adaptation: “Matthews said the water shortage on the Colorado River reflects fundamental problems in how Hoover Dam and other infrastructure projects were designed for a climate that no longer exists, and how water supplies continue to be divided under a rigid and antiquated system.” (Source: As Climate Talks Put Focus On Water Crisis, The Colorado River Provides A Stark Example, Los Angeles Times, November 4, 2021)

The Colorado Compact is trapped in a climate that went away in 1980 or 1990, and is not coming back for at least another millennium… I think this is an old car without airbags.

Scientists estimate that one-half of the decrease in water runoff of the Colorado watershed since 2000 is caused by unprecedented warming, a heat-driven erosion of water supply that’s destined to worsen as temperatures continue to rise.

The upshot is a permanent change in the climate system caused by an imbalance as Earth absorbs more energy from the Sun than it emits to space because of the blanket effect of greenhouse gas emissions, such as CO2. This worldwide nemesis is not about to change anytime soon. More likely, it will worsen.

Meanwhile in Washington, D.C., the highly touted Inflation Reduction Act of 2022, if passed, will face a predicament that’s already deeply embedded. It should be noted that Bill McKibben, of 350.org fame, writing in The New Yorker: Congress Looks Set To Finally Pass Historic Climate Legislation, July 31, 2022:

Taken as a whole, the bill is a triumph. It would be the most ambitious climate package ever passed in the U.S. and would allow the country to resume a credible role as an environmental leader.

The bill penalizes oil and gas companies that fail to cut methane emissions, but it doesn’t actually pressure energy utilities to abandon coal and gas. Still, analysts say that it would cut emissions to forty per cent below 2005 levels by the end of the decade.

Thus, the bill (except for provisions that actually promote more fossil fuel usage) is not bad but also not good enough according to what’s needed to actually mitigate global warming (caused by fossil fuel usage). Accordingly, scientists’ concerns about rapid climate change know that effective mitigation requires much stronger measures, much sooner.

As word of mouth spread that America’s major reservoirs were close to failing, it spurred more and more suggestions of tapping the massive Mississippi River to supplement the Colorado River Basin.

Moreover, according to The Waterways Journal, suggestions to tap the Mississippi River go back decades:

The Bureau of Reclamation did a thorough study of the idea of pumping Mississippi River water to Arizona in 2012, concluding that the project would cost $14 billion (in 2012 dollars) and take 30 years to complete. As recently as 2021, the Arizona state legislature urged Congress to fund a technological and feasibility study of a diversion dam and pipeline scheme to harvest floodwater from the Mississippi River to replenish the Colorado River.

However, it should be noted that the Trans Alaska Pipeline System was completed in June 1977, taking three years to complete the 800-mile pipeline under extremely harsh conditions. Hmm.

At this point in time, crossing one’s fingers that some relief will come soon in the West is the only short-term viable solution other than stealing water from other reservoirs, which the U.S. Reclamation Bureau was forced to do to save Lake Powell’s power generation. Yes, the Bureau had to scramble to “save” Lake Powell’s power generation capability. This fact alone is chilling.

The Bureau’s changes allow more water to flow into Lake Powell from upstream reservoirs, while releasing less water from Lake Powell downstream. In this bureaucratic scramble to find more water, Lake Mead comes up at the short end of the stick in favor of saving Lake Powell’s power generation. About 500,000 acre-feet of water will be released from Flaming Gorge Reservoir, about 455 river miles upstream of Lake Powell. Meanwhile, 480 kaf will be held back in Lake Powell by reducing Glen Canyon Dam’s annual release volume from 7.48 maf to 7.0 maf. (Source: Bureau of Reclamation Takes Drastic Steps at Lake Powell to Ensure Hydropower Generation, S&P Global, Commodity Insights, May 3, 2022)

Flaming Gorge Reservoir, on the Green River in Utah and Wyoming, currently holds about 3 maf of water and is at 78% of its storage capacity. Operators started sending additional water to Lake Powell in May 2022.

Thus, the Bureau keeps the ship of state together by cut and paste methodology robbing upstream reservoirs in order to keep the lights on for 5 million electric customers and water flowing for 40 million. Obviously, the cut and paste solution cannot go on forever.

This horror story of failing reservoirs that provide crucial power and water for dense population centers and key agricultural regions represents an inexcusable failure by leadership in government and business to listen to warnings from scientists for four decades, ever since James Hansen, director of NASA Goddard Institute for Space Studies, 1981-2013, testified before the Senate in 1988 that the greenhouse effect had been detected, indicating the climate system was changing, not for the better. That testimony was remarkably prophetic.

As it happens, what would have been a relatively simple solution back in the day has turned into a nightmare.

In that regard, The Inflation Reduction Act of 2022, the proposed Shumer/Manchin bill, is a Band-Aid, not a solution.

Postscript: “Earth is out of energy balance, more solar energy absorbed than heat radiated to space, by an astounding amount, more than any time with reliable data.” (James Hansen, June Temperature Update & The Bigger Picture, July 29, 2022)

Regarding the Inflation Reduction Act: “It is consistent with the long-standing ‘wishful thinking’ approach to climate policy, ask each nation to try to reduce their emissions and hope that the global results will add up to a solution. And then ignore the blatant scientific data showing that this approach is not working and will not work.” (Hansen)

Robert Hunziker  is a writer from Los Angeles.