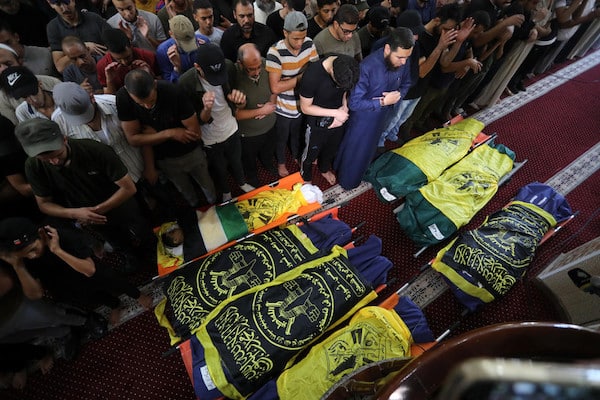 A ceasefire between Israel and the Islamic Jihad resistance group took effect before midnight Sunday, ending a deadly Israeli assault on Gaza.

In the hours before the Egyptian-mediated truce took hold, Israel ramped up its killing and assassination spree for the third consecutive day.

By late evening on Sunday, the Gaza health ministry said 44 Palestinians had been killed in the territory, including 15 children, since Israel started the bloodshed by assassinating a senior leader of Islamic Jihad on Friday afternoon.

More than 300 Palestinians have been injured, almost a third of them children.

No one was killed in Israel and there were no reports of serious injuries.

Al-Haq, a Palestinian human rights organization, said Sunday that Israel had “indiscriminately targeted civilians and non-military structures” and that the attack constituted “a grave breach of international humanitarian law and may amount to war crimes and crimes against humanity.”

For six consecutive days, Israel closed Gaza’s only commercial crossing as well as the only crossing for people between Gaza and Israel.

Sunday night’s ceasefire came after tense negotiations mediated by Cairo that appeared to stall on several occasions, fueling fears of an even more violent escalation.

The stumbling block, according to the network Al Jazeera, was Islamic Jihad’s demand that Israel release Bassam al-Saadi, one of its leaders in the occupied West Bank, and another member of the group, Khalil Awawdeh.

Awawdeh is seriously ill, having been on hunger strike since March to protest his detention by Israel without charge or trial.

Israel’s violent arrest of al-Saadi from his home in the West Bank city of Jenin last Monday marked the start of the current escalation.

Although Israel initially rejected Islamic Jihad’s demands, an agreement was finally reached after Tel Aviv conceded that it would “discuss” the two men’s release following a ceasefire.

Egypt committed itself to securing the men’s release as soon as possible. Ziyad al-Nakhala, the secretary general of Islamic Jihad, announced on Sunday evening that Awawdeh would be released to hospital on Monday and then allowed to go home.

Israel did not immediately confirm this.

While the ceasefire will come as a relief to Palestinians in Gaza who have been terrorized by repeated Israeli assaults, the latest attack by Tel Aviv has left a brutal toll, especially for children who make up half of Gaza’s 2.1 million population.

Without warning on Saturday evening, an Israeli warplane supplied by the United States targeted a three-story home in a densely populated neighborhood in Rafah, south of Gaza.

At least six missiles were fired by Israeli warplanes during the attack, killing seven people and destroying eight homes, according to Defense for Children International-Palestine, which conducts field investigations.

Around 35 people were injured, including 18 children.

The attack was apparently targeting senior Islamic Jihad leader Khalid Said Shehadeh Mansour, 46. Six others were killed in the assassination, including a child.

The attack also claimed the life of Muhammad Iyad Muhammad Hassoun, a 13-year-old boy. Muhammad “sustained severe lacerations all over his body, specifically the right side of his chest,” DCIP said.

Thread: A total of six Palestinian children have been killed since the Israeli military began attacking the Gaza Strip on Friday. Here are their names and faces. #GazaUnderAttack https://t.co/ZW2hW9Ktio

The U.S., which consistently endorsed Israel’s killing campaign in Gaza over the past three days, provides Tel Aviv billions of dollars in weapons annually which are frequently used to attack Palestinian civilians.

An explosion near a convenience store in the Jabaliya refugee camp on Saturday evening killed seven Palestinians, including four children.

The attack also injured more than 40 others, including 26 children.

Al-Mezan, a human rights group based in Gaza, said the explosion was caused by a rocket-propelled grenade, but did not specify its source.

“At the time of the explosion, Israeli warplanes were visible in the sky and Palestinian armed groups were firing rockets,” DCIP said.

The group added that it was still investigating the source of the explosion, which occurred in an area where people were sitting outside due to the power outages in Gaza.

The Israeli army said the explosion was caused by an Islamic Jihad rocket that fell short. But given the Israeli army’s record of lying and targeting civilians, its claims cannot be taken at face value.

Brother Momen (5, left)) and Ahmad Mohammad Ahmad Al-Nayrab (11) were killed by an explosion in Jabalia refugee camp in the northern Gaza Strip. DCIP is still working to confirm the source of the explosion. #GazaUnderAttack pic.twitter.com/SBpOMnS5Wb

An Israeli missile struck a group of Palestinians in Jabaliya on Saturday, injuring 22-year-old Abdulrahman Ali Hussein Ibrahim, who died of his injuries hours later.

A rocket-propelled grenade struck a home in the Jabaliya refugee camp on Sunday morning, killing Dia Zuheir Ahmad al-Buri, 32, and injuring others. Israel denied responsibility for the attack.

In a Sunday attack on al-Bureij refugee camp in central Gaza, Yaser Nimr Mahmoud al-Nabahin, 49, a member of the Qassam Brigades, the armed wing of Hamas, was killed along with three of his children.

The end of Israel’s bombing of Gaza–for now–means that the plight of Palestinians will quickly fall out of the headlines. But they will not return to anything resembling a normal life.

The purveyors of the fraudulent "rules-based international order" green-light yet another massacre in #Gaza by apartheid Israel. Their rules don't apply to the West or its proxies. They apply only to those who refuse to do the bidding of the U.S. hegemon.https://t.co/2oJB3UM1Kw

Their situation remains dire and intolerable as a result of the ongoing Israeli siege, a form of silent violence that targets every man, woman and child in the territory 24 hours a day.

Israel is able to perpetrate this violence against them thanks to the international impunity and support it continues to enjoy, especially from the United States, Canada and the European Union–the same countries that never cease their lectures about “human rights” and “international law.”