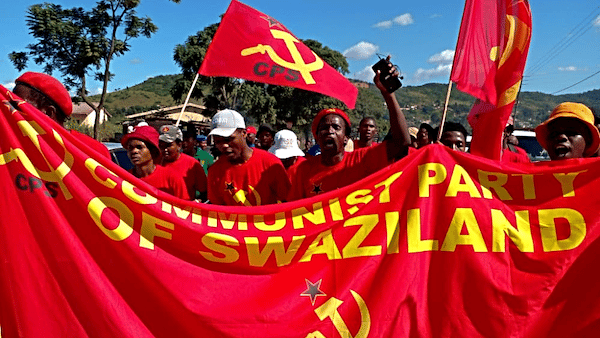 A protest by the Communist Party of Swaziland

“I was held face down at gunpoint with my arms and legs bound behind for half an hour, while they fired shots and chased down my comrades,” CPS central committee member Vuyiswa Maseko told Peoples Dispatch.

The Operation Support Service Unit (OSSU), a militarized police unit of King Mswati III in Swaziland, opened fire in the crowded working-class township of Matsapha and assaulted members of Communist Party of Swaziland (CPS) on the evening of Friday, August 5.

“I was held face down at gunpoint with my arms and legs bound behind for half an hour as they fired shots and chased down my comrades,” CPS central committee member Vuyiswa Maseko told Peoples Dispatch. Maseko was forced to the ground after resisting the police with his hands up in the air, along with another member Gcinizwi Lukhele.

Kwazi Dube was among the other members who had managed to dodge the police encirclement and sprint their way out. “The police chased him down, firing live bullets in this crowded area in the evening time. People waiting for their buses had to run in all directions for cover,” Maseko said.

He fell down while running under fire. They captured him, beat him with clubs, kicked him with boots and dragged him on the ground to where we were held captive, and tied him to us.

The 15-20 heavily armed OSSU men allegedly also called for army backup. Soldiers promptly arrived and joined the assault. “We were then interrogated about party activities, our addresses and university details, where we headed”, and also “why we wanted to attack them?” Maseko added, explaining that the OSSU had apparently thought that they would come under attack and panicked.

The army and police in Africa’s last absolute monarchy, where all political parties are banned, have been jittery since they killed over 70 people and arrested hundreds others mid-last year to put down the anti-monarchist rebellion.

When the unprecedented peaceful pro-democracy marches, which for the first time also spread across the villages of Swaziland, were met with force in June 2021, an uprising erupted in urban industrial areas. Matsapha, where the CPS members have a large presence and were attacked on Friday, was a hotspot.

Angry workers used petrol bombs, stones and sticks to attack properties of the King, who owns most of the economy and runs it for his indulgences such as a fleet of Rolls Royce cars, private jets, palaces and parties, while nearly 70% of the population survives on less than a dollar a day. Ordering the army to crack down, Mswati had fled his kingdom by the month-end, returning only in mid-July 2021 when his security forces had brought the kingdom back under his control.

However, with the churning of a strong anti-monarchist sentiment, repeated protests have continued, especially by the student union and community organizations associated with the CPS. The banned party also has a strong presence in trade unions which have organized government employees for whom getting salaries is a continuous struggle as the government pleads poverty even as the King, who controls the government, siphons billions each year.

“Democracy Now!” and “Mswati Must Fall!”–the slogans of the CPS–have become a cry at the protests by students and workers, and even at the rallies in villages and small towns in Swaziland.

King Mswati tells police to take “an eye for an eye”

Telling his security forces to take “an eye for an eye,” the King delivered an aggressive speech during the ‘Police Day’ that was held at the Matsapha Police College on Friday, August 5. This was earlier in the day, before the CPS members were assaulted. The chief of police from Rwanda, which has close security relations with Swaziland, was reportedly in attendance, along with the South African police chief and police representatives from Botswana, Zambia and Mozambique.

“The town was full of police that day,” said Maseko, who was walking with Lukhele and Dube to the Matsapha traffic circle where they were to meet three other members. Together, they were to board a bus to Hhukwini, 20 kilometers from capital Mbabane, to attend the funeral of a relative of another member.

The police in an OSSU truck stationed at the circle “saw us approaching toward them from two sides wearing red T-shirts with the party regalia and thought we were going to attack them. They immediately jumped and started attacking us,” he explained.

It was around 4:30 when they captured us, and around six when we were released.

No charges were pressed. For an hour and a half–when the CPS members were forced face down on the ground, beaten and interrogated–they were not taken into custody, but harassed in public view. “The police know Matsapha is our stronghold. So by harassing CPS members in public, the police are trying to scare the people of the community who support us,” Maseko said.

However, this episode on Friday does not seem to have deterred the young communists–all in their 20s. On Saturday, Maseko and his comrades, along with over a hundred Hhukwini community members at the funeral, held a pro-democracy demonstration: breaking into a dance and responding with a chorus of war cries to party National Organizer Simphiwe Dlamini’s rhythmic chants challenging the King’s authority.

“Every site should be a site of struggle. Funerals and any other community gatherings should be rallies of the fight for Freedom, Democracy & Socialism,” the CPS said. Addressing a gathering of community members later in the evening, Dlamini reiterated the CPS’ call for the formation of security councils and welfare councils to defy the King’s police and local chiefs. He urged pastors and the church to play an active role in the struggle for democracy.

Also present at this funeral-demonstration was Bongi Nkambule, another party member who has been forced underground since July 13 after escaping about 30 heavily armed policemen who raided his home in Msunduza, another township on the capital’s outskirts.

Unable to capture him, the police had taken his wife into custody and beaten her for hours. Nkambule had become a target of the police after he was identified as a key organizer of the sunset rallies in his community in Msunduza.

To signify to the communities the nearing end of the monarchist reign over Swaziland, which the King has arbitrarily renamed Eswatini, the CPS started organizing what it calls sunset rallies from March. Later that month, police abducted Nkambule and, without pressing any charges, dumped him outside the capital in an injured state after torturing him for hours regarding these rallies.

Although small in numbers, these rallies, where community members defy the monarch by raising the flag of the banned party and call for his overthrow, appear to have unsettled Mswati. By the time Nkambule’s home was raided in July, these rallies had become a weekly protest.

“We organize rallies in different places each week. For security reasons, we don’t reveal the venue in advance,” Maseko explained. A day after the funeral, on Sunday, August 7, residents marched in the sunset rally led by CPS commissar Titus Vilakati in the Madonsa township on the outskirts of Manzini.