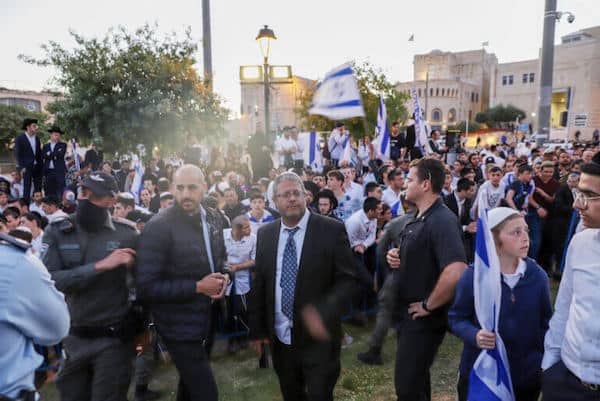 Israel’s unprovoked attack on Gaza last week that resulted in yet more childrens’ death and trauma, widely related on social media, is sure to further damage Israel’s reputation among Democrats. The last time Israel attacked Gaza, in May 2021, even traditional friends got wobbly, The New York Times put the faces of 60+ dead Palestinian children on the front page, and a subsequent poll revealed that 38 percent of American Jews under 40 believe Israel is an apartheid state.

Today more U.S. politicians are daring not to support Israel’s latest attack; and one young American Jewish group damned the attack as a political stunt by Israel’s prime minister Yair Lapid to stay in power, facing an election November 1.

But Israeli politics could not be more different. Jewish Israelis saw the attack as a great success. All Israel is “united” in support of the Gaza attack, says Israel advocate Daniel Gordis, who describes “ wall-to-wall agreement in Israel (except, as expected and even understandably, from the Arab parties).”

Even Merav Michaeli, the head of the left-centrist Jewish party, Labor, took a hawkish line on the Israeli attack, saying Israel was besieged by Palestinian terrorists. Michaeli is battling for Labor to keep its seven seats in parliament in the coming election; and she faces a strong headwind: Israeli Jewish society is very rightwing. The left is slowly evaporating over the “security” issue; and about 80 of the 120 seats in the parliament are solid rightwing.

The rightwing tilt of Israeli society was captured in a discussion last week between Ori Nir of Americans for Peace Now and former Haaretz Washington reporter Chemi Shalev. (Youtube link).

The two described all the “energy” that surrounds Itamar Ben-Gvir, the head of Otzma Yehudit, the Jewish Power party–a racist Kahanist faction that had been barred from the Knesset in previous decades. Ben-Gvir’s party is now part of the Religious Zionism bloc of seven seats in the parliament, and politically loyal to Netanyahu. Polls say it could almost d ouble in size in the next election.

I have to tell you, during those three weeks, the only billboards and flyers that I’ve seen on the street in Jerusalem, were for the extremist Kahanist Party, the religious Zionism party. Now, this is Jerusalem granted, I know that Jerusalem doesn’t reflect the overall political sentiments in Israel. But still, it’s the largest city in Israel.

Shalev agreed that Religious Zionism is gaining among young people.

You’re right. The only place where you can see real energy is on the far right among young people. I don’t know how much that’s going to translate into but don’t forget, this is July. I mean, I know we have a long election campaign… I can tell you that the right is very confident. And the left is–and I say left with quotation marks–is, as usual, very afraid. And we can go on but sure.

Shalev said that a recent poll of young Israelis showed that Religious Zionism attracts 30 to 40 percent of the young’s support. “So they are going to do well.” But if Religious Zionism gets 10 seats and Netanyahu still can’t form a majority, Religious Zionism will “make a lot of trouble inside parliament” but that’s all.

Polling in July showed that the Religious Zionism party if headed by Ben-Gvir of Jewish Power would win as many as 13 seats, making it the third largest party in the Knesset behind Lapid’s centrist party and Netanyahu’s Likud. Ben-Gvir l ately led prayers at the Haram al-Sharif, a highly provocative act that has unleashed violence in the past. 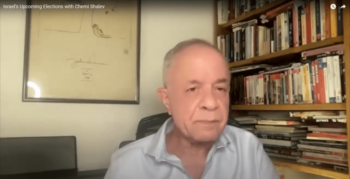 [Merav Michaeli] is not doing as well as people expected… Labor, as of now, is not yet in danger. But there, are circumstances in which it could very well be in danger.

Shalev then said that Labor and Meretz, the two left-leaning Zionist parties, which hold seven and six seats respectively, are concerned about not getting into the next parliament. If a party falls below 3.25 percent of the vote–or four seats–it gets no seats at all, and its votes are redistributed.

And that means that it will hover around the threshold vote, and there’s going to be a lot of pressure on Labor and Meretz to run together.

Daniel Gordis pointed out the unity of rightwing and leftwing Zionists in support of the attack on Gaza.

Bezalel Smotrich, on the radical right, explicitly supported not just the troops, but even [Prime Minister] Yair Lapid, too, saying he had Lapid’s back and the PM should do whatever it takes. Zahava Gal’on, now running to head Meretz, the (often radical) left-most Jewish party, say, “What we need now is hope and security, not escalation,” which was obviously not a critique of the operation (and which may well have been directed at Hamas, which had not entered the fighting)?… Even Israelis on the left do not believe that military action against terrorists… to keep your children safe is illegitimate.

Of course we are not talking here about the Joint List of Palestinian parties, including Ayman Odeh, Ahmad Tibi, and Aida Touma-Sliman. They repeatedly slammed the attack and the “security” narrative. “The Israeli government commits war crimes against the Palestinian people to serve narrow political interests, and the Gazans are paying the price in blood,” Odeh wrote last week.

But the left Palestinian parties, comprising six seats, are marginalized from Israeli Zionist politics. No wonder Shalev says that the left believes the Palestinian vote will be lower this time than the last election.