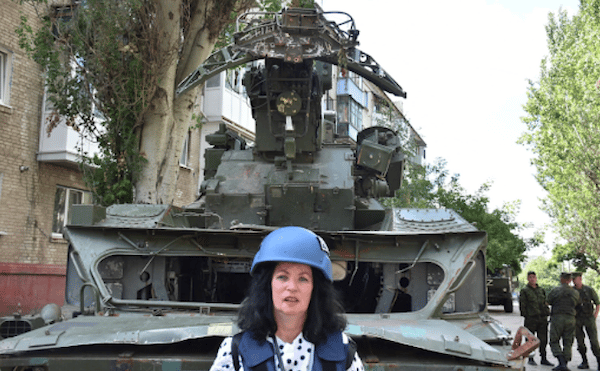 [Sonja van den Ende has been reporting on the war in eastern Ukraine and has received protection from the Russian military.—Editors]

>On my way from Severodonetsk to Lysychansk on the right bank of the Donetsk River in eastern Ukraine, I saw many destroyed buildings as well as a lot of cars, ambulances and rescue vehicles. A few bodies could be seen when I passed the Bilohorivka Bridge, which was targeted by the Ukrainian army.

The regime in Kyiv claims that the Russians had this on their conscience, but the facts refute this.

The Ukrainian army and their Aider (or Azov), a Luhansk Nazi battalion, knowing that the Russians were coming, hid themselves in buildings where civilians lived, in schools and shopping centers. They took civilians hostage and used them as human shields, keeping the civilians captive in the basements. [Note a recent report by Amnesty International has confirmed that Ukrainians have indeed been illegally operating out of civilian buildings].

On May 9, 2022, Russian troops attempted to cross the Seversky Donets River with a temporary pontoon bridge at Bilohorivka. Ukrainian troops bombed the bridge and Russian vehicles crossed it, resulting in Russian losses.

But in the end, the Ukrainians proved to be too weak against the supremacy of the Russian army, which from Severodonetsk eventually took Lysychansk, the last major city in the Luhansk region, on June 26, 2022.

In Lysychansk, after the Russian victory, there was a display of all confiscated NATO and U.S. weapons. Also, there was humanitarian aid for the remaining residents and water was supplied to provide relief from the 35-degree heat.

A street full of confiscated NATO, U.S. and older Ukrainian (Soviet-style) weapons that had been seized during the battle for Luhansk—was displayed by the Russian army along with tanks and ammunition.

Apparently the Ukrainian army did not have enough weapons, even though NATO and EU countries have provided billions of dollars in weaponry since the war began.

One soldier told me that drones were bought at AliExpress. Rumors also have it that Russia confiscated HIMARS, although none was on display that I saw.

HIMARS (High Mobility Artillery Rocket System) is intended to engage and defeat artillery, air defence concentrations, trucks, and light armor and personnel carriers, as well as support troop and supply concentrations. The system launches its weapons and moves away from the area at high speed before enemy forces locate the launch site. It has been delivered to Ukraine from the U.S. and some have been confiscated by the Russian army.

The Melitopol Referendum About Joining Russia

When I visited Melitopol for the third time, I was again invited to a press conference in the town hall. Last time there was new mayor Galina Danilchenko, but this time her deputy spoke, a straightforward man who patiently answered all questions.

The former mayor, Ivan Fedorov, was a member of Pravdy Sektor (an ultra-right-wing political party with Nazi ideology) who was not elected but installed by the regime in Kyiv. This was in a city with a majority of Russian-speaking residents, who were now being discriminated against. They were no longer allowed to speak Russian, and were no longer allowed to participate in their annual Ninth of May celebration—the commemoration of the end of the Second World War and victory over the Nazis!

I had a question for the deputy mayor, the last question at the press conference.

Mayor Galina Danilchenko’s deputy is a very decisive and “to the point” man. I asked him as a last question during the press conference:

How will the EU react if there is a referendum just like in Crimea in 2014?

His reply was succinct:

We have nothing to do with that, Europe is finished and when they will react badly, the same thing will happen as in the Patriotic War of 1941-45, we will defeat fascism! We live here, they do not!

So these were his last words to my final question. He further said in his speech that a referendum will be held in September 2022, to decide whether Melitopol will become part of Russia. But it is not just about Melitopol, but also about Kherson and Zaporizhia and other “liberated” cities in southern Ukraine and the entire Donbas.

The Western media are already warning about it. It would be “false” elections, just like in Crimea they warn. They still call that an annexation in the West, but the residents I spoke to in Crimea call it a democratic referendum, where they voted to be part of Russia!

As the mayor’s spokesperson said, it is up to them, not propagandists, called media or politicians, far away in the West! They only follow propaganda to maintain a war due to their “twisted” ideology. They in the West are at war with Russia. But the inhabitants of the Donbas are at war with the regime in Kyiv and NATO, which fire missiles at them every day, and kill their children. That’s the way it is and nothing else!

As expected and what I have heard several times, in the cities, towns and areas I have visited over the past five months, most people do not want to belong to Ukraine any more. Too much has happened, eight years of war, a war of attrition for the population that stayed.

The West is deaf to the war: They only follow their own agenda and ignore the civilian casualties in eastern Ukraine! For the remaining residents, the pinnacle has been reached, as NATO (EU and the West) supplies weapons to the regime in Kyiv, which is killing them and their children! So most likely the majority will vote yes, to become a part of Russia!

After my visit to Mariupol, the Azov Steel factory and other places, I started to receive daily “threatening” emails. In these emails, which came from Langley (CIA) with some via Polish trolls, I was accused of being an FSB agent and my details have been known for years about my crimes. If I enter the Netherlands, I will be declared an “outlaw” and face court.

After researching where these threats might have come from, I quickly found out that there is a Ukrainian so-called “peace list,” which is really a death list, run by Ukrainian Nazis in conjunction with the Central Intelligence Agency (CIA); at the top of the list is “Langley, Virginia,” the location of CIA headquarters, and its branch in Poland.

This is the list that includes Henry Kissinger and Viktor Orban; several journalists in Ukraine were also killed by it. Recently, Johnny Miller, a journalist from Iranian Press TV, has been put on the list as well. Children’s names also appear on the list.

Since my name has appeared on this list, great confusion has arisen in the Dutch media. Rumors circulated that I was dead, fallen in battle in Ukraine. Which is absurd, because I am not directly on the front lines. They are deliberate rumors, spread directly by various media outlets, after they themselves wrote a so-called article about conspiracy theories that I would spread about biological weapons. After this, things escalated, not only in the Netherlands (my home country), but also in Belgium (Flemish-speaking area).

This shows the true face of the so-called Western democracies. As I said, kids’ names even appear on this list—for instance, a 13-year-old girl from Luhansk, Faina Savenkova.
Faina has been writing about her experiences in the Donbas. After her name appeared on the list, she started to receive online threats of physical violence.

Johnny Miller wrote about Faina on Press TV; after his publication, he was added to the list as well!

So much for Western democracy, human rights and protection of children and journalists. It is plain fascism, what is happening in the Western world, or a move towards it.