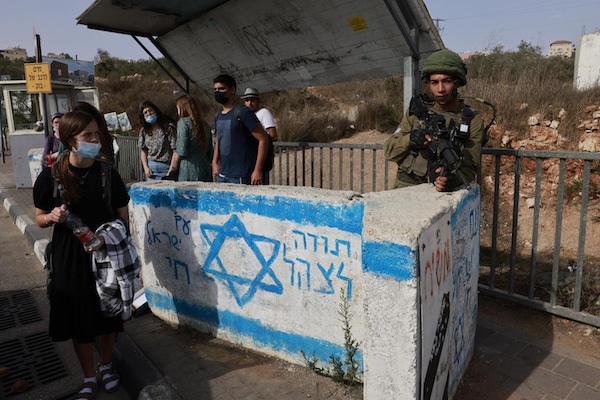 Three Jewish passengers, one impersonating a transport ministry official, have forced dozens of Palestinians off a bus heading to the occupied West Bank, according to Haaretz.

The incident happened last Thursday, when about 50 Palestinians workers left the bus in the city of Bnei Brak, after the Jewish passengers demanded that the driver tell them to disembark.

Tnufa Transportation Solutions, the bus owner, operates routes between Tel Aviv and the West Bank settlement of Ariel, taking Palestinian workers with work permits from Israel back to the occupied West Bank.

After a few buses went by and didn’t stop–because bus 288 is reserved for Jews only–one that was empty of Jews stopped for us and we got on,” one of the Palestinian passengers told Haaretz.

Three Jews boarded in Bnei Brak and demanded that all the Arabs be taken off.

The driver made a call to his superiors and afterwards asked the Palestinians to alight.

The law prohibits transport operators from segregating Jews and Arabs using their services. The CEO of Tnufa Transportation Solutions denied the allegations.

“We have no separate routes for Palestinians or Jews… There are lines that go to the crossings [between Israel and the West Bank] and naturally Palestinians use them more, but if a Jew wants to get on, there’s no restriction,” he said.

At Haaretz’s request, the company conducted an inquiry and said that the driver “fell victim to a shameful manipulation of a passenger who impersonated an employee of the Transportation Ministry”, who claimed that these were the new instructions from the ministry for that specific route.

“The new driver said he argued with the imposter, but he told him that he could lose his job or receive a large fine if he did not follow the instructions immediately,” said the company in a statement.

It seems, that because of the pressure put on him, the driver gave in to the racist manipulation and was forced to leave the passengers at the bus stop. The driver did not report it to his employer.

The company filed a complaint with Israeli police, reaffirmed its commitment to providing an equal service to Palestinians and Jews, and apologised to the Palestinian passengers for the “unfortunate event”.