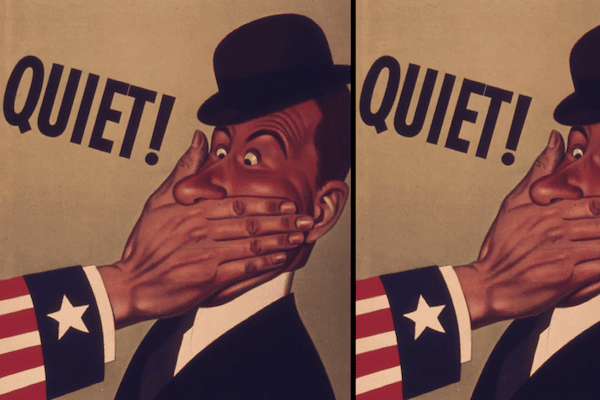 A U.S. government propaganda poster from the 1940s

The U.S. government employs many strategies to try to justify its intervention in the internal affairs and violation of the sovereignty of foreign nations. Chief among these deceptive tactics is Washington’s weaponization of accusations that its adversaries violate the freedom of expression.

This is quite ironic, given that the United States is the world’s leading violator of press freedoms, according to any consistent definition of the term.

And unlike the countries that Washington claims supposedly repress the freedom of expression within their borders, U.S. government censorship of independent media outlets and suppression of alternative voices is global, hurting people across the planet.

The Joe Biden administration has in particular gone to great lengths to depict itself as a defender of civil liberties.

In May, the White House published a statement commemorating World Press Freedom Day. The purpose of the declaration was to portray Russia as a leading violator of free speech and the United States as its noble protector.

But the reality is Washington is guilty of exponentially more persecution of journalists than anything Moscow is even accused of.

There is no more gruesome symbol of the ludicrous hypocrisy of the United States portraying itself as a protector of press freedoms than its authoritarian persecution of the most famous journalist on Earth: Julian Assange.

The U.S. government’s ruthless attack on Assange, the founder and publisher of whistleblowing journalism website WikiLeaks, is likely the worst blow to freedom of speech carried out by any government in history, with dangerous implications for all human beings on the planet.

The U.S. case against Assange essentially amounts to a criminalization of journalism.

Washington is seeking to extradite and prosecute Assange, an Australian national who has never lived in the United States, for the “crime” of publishing truthful information exposing U.S. war crimes–in other words, for doing the kind of journalism that any good reporter should do.

Assange is facing up to 175 years in prison on 18 charges. If it succeeds in the extradition process, the United States will likely throw the WikiLeaks publisher in a medieval-style dungeon, where he will be held in solitary confinement for the rest of his life.

Due to persecution by the United States and United Kingdom, Assange has already been essentially imprisoned for a decade. Starting in 2012, the WikiLeaks journalist sought refuge in Ecuador’s embassy in London. He would end up being trapped there for seven years. 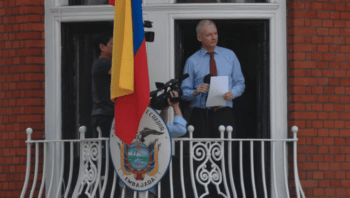 Journalist Julian Assange trapped in Ecuador’s embassy in London in 2012.

In 2015, the United Nations Working Group on Arbitrary Detention determined that Assange had been “arbitrarily detained” and should be released and given compensation.

The British government ignored the UN legal experts. Instead, in 2019, UK authorities violated Ecuador’s territorial integrity, entered the embassy, and kidnapped Assange (who by that time was a naturalized Ecuadorian citizen, in addition to his Australian nationality).

Since 2019, Assange has been subjected to draconian treatment in Britain’s maximum-security Belmarsh prison, held alongside people convicted of “terrorism,” murder, and other violent crimes.

The UN Working Group on Arbitrary Detention once again condemned the UK government in 2019 for violating the freedoms and fundamental rights of the Australian journalist.

In Belmarsh, Assange has been held in solitary confinement for up to 23 hours per day. UN legal experts have repeatedly stated that this kind of prolonged solitary confinement, which is routinely carried out by the United States and Britain, amounts to psychological torture.

In other words, Julian Assange has been effectively imprisoned for a decade, has been subjected to grueling torture, and will likely spend the rest of his life in a U.S. prison, all because he committed the “crime” of doing journalism.

It is impossible to imagine a tyranny more absolute than this. With the Assange case, the United States is establishing a precedent that says it can imprison any journalist or really any person on Earth, regardless of their nationality, throw them in a dungeon for the rest of their life, and torture them. All Washington needs to do is fabricate charges and claim that that individual violated its domestic laws.

Assange is not the only victim of this kind of Kafkaesque persecution by the U.S. regime. The United States holds multiple political prisoners, including Black revolutionary journalist Mumia Abu-Jamal.

Although it has less than 5% of the world’s population, the United States has nearly 25% of its prisoners.

In its May statement on World Press Freedom Day, the Biden White House condemned Russia for passing “a ‘disinformation’ law intended to silence those speaking the truth.”

The hypocrisy could hardly be any more ridiculous. The U.S. government has used the canard of “disinformation” to censor news outlets and journalists from around the world, erasing their work and removing them from digital platforms.

While Washington accuses Moscow of violating the freedom of speech inside Russia, U.S. censorship harms the entire planet.

Washington and Brussels insisted this draconian violation of the freedom of speech was necessary because Moscow was supposedly spreading “disinformation” about the war in Ukraine. Their own media outlets, meanwhile, have constantly been exposed for disseminating fake news and misleading propaganda to justify illegal Western wars of aggression–which explains why just 11% of North Americans trust television news, and only 16% believe newspapers.

YouTube’s censorship of Russian media outlets did not just affect people in North America and Europe, but rather the entire world. And YouTube is not just a private company; it is owned by Google, which is inextricably linked to the U.S. government.

All major Silicon Valley companies are U.S. government contractors. Google, Facebook (which owns Instagram and WhatsApp), and Twitter have many billions of dollars of contracts with the U.S. government agencies such as the CIA, FBI, National Security Agency (NSA), Department of Defense, and Department of Homeland Security (DHS), as well as police departments.

The U.S. government uses Big Tech corporations in Silicon Valley as arms of soft power, censoring information that is inconvenient for its foreign-policy interests, violating the free speech of billions of people in foreign countries. 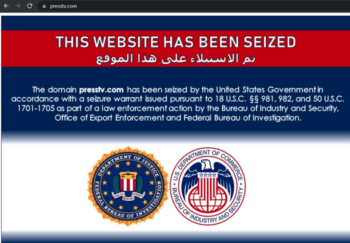 This censorship is often directly overseen by veterans of the U.S. national security state. Google and Facebook have hired dozens of former CIA agents and NATO press officers. Twitter has recruited many former FBI officers, and the top official overseeing Middle East-related content on Twitter is also a member of British Army’s psychological warfare unit, which admits to waging “information warfare.”

Iranian media outlets have been constantly censored by the U.S. government and its soft-power arms in Silicon Valley. The U.S. Justice Department has even seized the domain names of dozens of news websites that it alleged were being run by Iran and Yemen.

Just a week before Nicaragua’s elections in November 2021, Silicon Valley launches a coordinated purge of pro-Sandinista accounts on social media.

The same was clear in the U.S.-led coup attempt against Venezuela. Representatives from Venezuela’s democratically elected government were suspended on Twitter, whereas U.S.-appointed coup puppets like unelected putschist Juan Guaidó and his gang of corrupt cronies were all verified and promoted.

In addition to direct censorship through suspensions, there is also more subtle censorship by Silicon Valley mega-corporations.

Google, for instance, distorts its algorithm in order to promote mainstream corporate media websites, and has a blacklist of outlets that it hides in search results. This means that independent media publications, especially left-wing and anti-imperialist pages, are severely hurt by the Google algorithm and get significantly less traffic.

Even DuckDuckGo, which markets itself as a Google alternative that protects privacy, engages in this political censorship. After Russia initiated its special military operation in Ukraine in February 2022, the website announced that it would be demoting in its search results any websites that it accuses of being pro-Russian.

While the United States persecutes journalists that expose its crimes and aggressively censors independent media outlets that operate inside its borders, Washington ironically claims to support “independent media” abroad.

In its May statement on World Press Freedom Day, the Biden White House called for supporting so-called “independent media” in foreign countries.

CIA cutouts like the U.S. Agency for International Development (USAID) and National Endowment for Democracy (NED) have poured many millions of dollars into bankrolling media activists in countries where the United States seeks regime change.

The U.S. government claims it is supporting “civil society,” but in reality it is funding political opposition groups that use the media as a weapon to destabilize Washington’s adversaries.

By definition, these media activists are not “independent”–they are receiving funding from the U.S. government in order to advance its political interests. They are essentially indirect employees of the U.S. State Department, and instruments of Washington’s soft power.

These media activists constantly spread fake news, disinformation, and propaganda, and have played a key role in violent coup attempts in Nicaragua, Venezuela, Bolivia, Hong Kong, Syria, Belarus, and beyond.

The absurd hypocrisy of Washington persecuting independent journalists at home while funding them abroad highlights the deep cynicism of the U.S. regime’s information warfare tactics.

Washington may depict itself as the beacon of freedom and democracy, but its global empire is authoritarian and ruthless.

U.S. government repression impacts everyone on Earth. As long as the United States maintains its empire, and continues to try to control all of the planet’s political and economic affairs, no country, and no individual, can ever be completely safe.