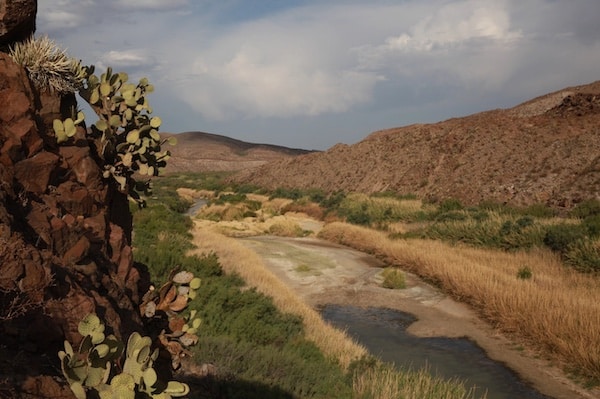 This story is a collaboration between The Texas Observer and Inside Climate News.

Northern Mexico’s water crisis is spilling into Texas, drying out the two bi-national reservoirs of the Rio Grande, on which millions of people and a billion dollars in agriculture rely.

One reservoir, Lake Falcon, is just nine percent full. Nearby communities are scrambling to extend water intakes and install auxiliary pumps to capture its final dregs. The other reservoir, Amistad, is at less than one third.

“It’s reached its historic low,” said Maria Elena Giner, commissioner of the International Boundary and Waters Commission, which manages the touchy business water sharing with Mexico on the Rio Grande.

This is a historic moment in terms of what our agency is facing in challenges.

In far South Texas, the two most populous counties issued disaster declarations last week, while others struggle to keep up with the unfolding crisis. If big rains don’t come, current supplies will run dry in March of 2023 for some three million people who live along both sides of the river in its middle and lower reaches.

“That’s it, it’s game over at that point,” said Martin Castro, watershed science director at the Rio Grande International Study Center in Laredo.

And that’s 6 months away. It’s not looking good.

The city of Laredo shares the river with the booming 70-mile stretch of suburban sprawl that sits 100 miles downstream, near the Gulf of Mexico, in a region known as the Rio Grande Valley. This most populous stretch along the river includes large Mexican cities like Matamoros and Reynosa and some 40 smaller ones in Texas. Most major cities here have doubled in population since the 1980s.

Since then, the water supply has only shrunk. Seventy percent of the water that reaches The Valley flows from the mountains and deserts of Northern Mexico, which is gripped by 20 years of drought across all the North American deserts.

Mexico owes one-third of the water that falls in those mountains to Texas under a 1944 treaty. But for almost two years, it hasn’t been able to make a payment. Its last attempt to do so sparked a riot of local farmers who halted the release of their water to farmers 500 miles downstream in Texas.

Since then, drought has only deepened. Mexico’s third largest city, Monterrey, about 100 miles from the Texas border, has been rationing water all summer. The Rio Grande Valley has no reason to believe they’ll be getting water from Northern Mexico soon.

Meanwhile, a summer of record-breaking heat in Texas means the region needs more water than ever to keep its crop fields and lawns alive. Only massive rains will turn this situation around.

“We’re praying for a hurricane,” said Jim Darling, former mayor of McAllen, Texas, and head of the Region M Water Planning Group, which covers the Rio Grande Valley in Texas.

The region doesn’t have many other options. Emergency plans call for drinking water to be trucked in. Other plans to run pipelines to distant aquifers are years from realization. In the past, big rains have always saved the day when water scarcity approached.

But the dry bouts have hit harder and more frequently since the mid-1990s. The Rio Grande reservoirs hit dangerously low levels in 1999 and 2013, but never as low as they are today.

“To actually wish for a hurricane is pretty odd,” said Sonia Lambert, manager of Cameron County Irrigation District No. 2, which provides water to farmers in The Valley.

But at this point that’s what’s going to save us. It is a very scary situation.

This disaster didn’t sneak up on anyone. More than a century of development along the Rio Grande’s banks have changed it from a wild torrent to a tamed channel in a ditch. The old Great River has been gone for a long time. This summer, it stopped flowing entirely through more than 100 miles of its most rugged reaches where it had never been known to dry up before.

Yet, solutions have evaded authorities in the border zone, due to the challenges of bi-national management and the region’s historic marginalization as a largely Spanish-speaking periphery of the United States.

“The bucket is almost empty,” said Castro in Laredo.

We are headed towards a point of no return.