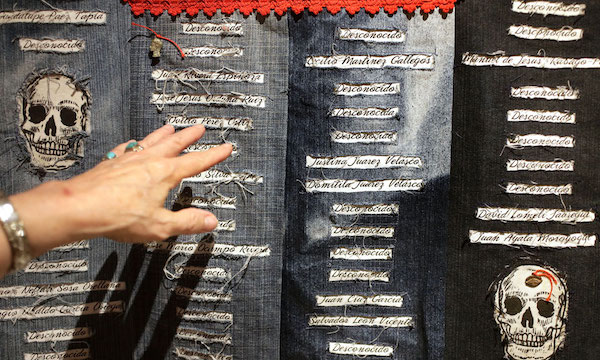 In this May 2, 2018 photo, Pam Weeks, curator at the New England Quilt Museum, points to names on a quilt by artist Jennifer Eschedor, that is part of the exhibit: ‘Beyond the Border Wall, The Migrant Quilt Project,’ at the museum, in Lowell, Mass. Artists, quilt makers, and activists joined forces to create unique memorials to migrants from Mexico and Central America who died in the southern Arizona desert. They’ve sewn quilts from bits of clothing, keepsakes, and found objects collected in the migrants’ makeshift camps. | Steven Senne / AP

U.S. government programs for migrants who cross the country’s southern border are punitive and disjointed. Left-leaning political groupings may criticize, but they too have fallen short in conceptualizing lives of dignity for migrants in the United States. Nor do they adequately take into account adverse circumstances weighing on migrants’ lives in their home countries.

First among the forces pushing masses of people northward is the environmental crisis. The role of climate change in reducing soil productivity and food availability and in predisposing already beleaguered people to migrate is of great concern.

One assumption here is that capitalist systems of production and consumption have been central to causing the climate to change for the worse. Another is the need for a war on capitalism so as to stave off more climate change and cope with its fallout. That hasn’t happened in the industrialized northern countries.

Southern regions may be different. The excesses of capitalist globalization have hurt masses of people there; they were never afforded the relief northern peoples gained from welfare-state remedies. So in some cases, they may be more ready to take up the climate change fight. 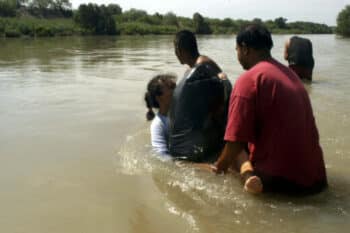 Unidentified migrants, who did not wish to give their names, from the state of Jalisco, Mexico, cross the waters of the Rio Grande, with the help of two ‘coyotes’ or smugglers, in an attempt to reach the U.S. border, in Nuevo Laredo, Mexico, May 18, 2006. | German Garcia / AP

Northern climate change warriors who are anti-capitalist ought to be establishing linkages of support with their southern counterparts. One precedent for them is Spain. Anti-fascists in 1936 joined the International Brigades to defend the Spanish Republic. Now, in one way or another, northerners would be joining a faraway fight, this time against climate change. One locality is Guatemala.

Author Ilka Oliva Corado describes herself as an “indigenous, undocumented immigrant in the United States.” An English-language version of her story, which is situated in Guatemala and titled “The Plum,” appears here. Excepts follow:

Guillermina leaves the grocery bags on the table and hurriedly takes out a plum, washes it ,and takes a bite… She is grateful for the hands that cared for it from the time the seed of the tree was planted. Ever since she was a child, her peasant grandparents taught her to be thankful for the labor of those who work on the land.

She was from Parramos, Chimaltenango, in Guatemala. When she arrived in the United States, she was speaking only her mother tongue, Cakchiquel… She spent 20 years working as a domestic worker in New York… Guillermina left Guatemala with her brother Jacobo to help her parents raise her younger siblings… She was on the eve of her fifteenth birthday when she left her indigenous clothing behind and packed two pairs of pants and two T-shirts in her backpack…

(Oliva Corado writes that the traffickers sexually abused Guillermina and her brother as they traveled in Mexico, from Chiapas to Tijuana.) “She doesn’t know what happened to her memory. But she managed to block all recall of the journey after they arrived in Tapachula [in Chiapas].” (The author writes that Jacobo was similarly abused. He remembers, has nightmares, and sleeps fitfully at night.)

He works three jobs. Every Friday they collect their money so that Guillermina can send off the remittance. Neither of the two will allow their younger siblings to emigrate. At home… they work the land of their grandparents, but Miguel, the youngest, didn’t listen to them and emigrated with another group of friends. He wanted to leave to help his older siblings deal with the economic burden of the house. Now he’s been missing for three years.

Guillermina bites into the plum that takes her back to remembering the bean fields, shade from the avocado and orange trees, and furrows in the cornfields. It was there she saw her younger siblings beginning to walk while her parents were working.

Plum juice drips from the corner of her lips… But tasting the fruit that Miguel loved so much sets off the pain that for three years has been knotted in her throat and she begins to cry inconsolably.

It was in the supermarket that she received the call from Jacobo. There is news of Miguel. A forensic team did tests and they have confirmed his identity. A humanitarian rescue team searching months ago for a missing migrant woman found his bones in a dry river in Sonora. Her parents will be able to bury their young son in the town cemetery, finally.

The family’s land may not have been producing enough food to satisfy nutritional needs, nor enough to sell and provide cash. International agencies concerned about food shortages use a scale that registers severity. It consists of phase 1–no significant problem; phase 2–stress; phase 3–crisis; phase 4–emergency; and phase 5–widespread acute malnutrition.

The 2022 Global Report on Food Crises, assembled by United Nations agencies, reported on trends in Guatemala, population 16.9 million. In November 2018, 2.12 million Guatemalans were classified as experiencing food “crisis.” The corresponding figures in August 2020 and in May 2021 were 3.24 million and 3.29, respectively. As of those dates, there were 4.67 million, 7.21 million, and 7.78 million people, respectively, who endured food stress. A recent report indicates that, as of September 2021, 4.6 million Guatemalans were facing food crisis (phase 3) or food emergency (phase 4).

The World Meteorological Organization, reporting in July on the impact of climate change in Latin America and the Caribbean, points out that,

The authors of another detailed report on the region’s “Climate Change Emergency” state that,

The present bimodal pattern of precipitation in Central America may be distorted in the coming decades… Extreme phenomena like droughts, hurricanes, and the Niño Southern Oscillation will be recurring… and their intensity will increase with climate change .. These phenomena magnify social-economic vulnerability in the region.

A survey of the impact of changing climate in Guatemala claims that drought “mostly afflicts the semi-arid region of the country known as the “dry corridor,” and that “in the coming years, that area is expected to extend to higher elevations.” Recently, rain has been uncharacteristically scarce or absent during heat waves.

Rural families in Guatemala grow or produce food from their own land. Family members may also work seasonally on big farms to be able to purchase additional food, or they fish or hunt. High poverty rates underscore the vulnerability of their lives: 70% in Guillermina’s Chimaltenango department and nearly 80% among Guatemala’s indigenous population. Now, the impact on food supplies of droughts, storms, and floods—which are more severe because of climate change—adds to their plight.

Many Guatemalans and others in the Global South have to move. They go to big cities or they cross national borders to begin new lives, and/or earn money to support families at home. Plenty of other reasons to migrate do exist, such as land grabs, governmental chaos, and violence from criminals, gangs, paramilitaries, and soldiers.

But migration undertaken in response to climate change effects is highly significant, so much so that victims are everywhere, and in the millions. On that account, the prospect emerges of mass political mobilization and of growing awareness along the way of capitalism as enemy.

Capitalist-inspired intrusions already fill the landscape with mines and oil-extraction facilities, dams and flooded rivers, pollution, mega land-holdings and mono-culture farming operations. U.S. political interference, debt to owed foreign banks, privatizations, and cuts in social spending have provoked opposition movements. Growing appreciation of linkage between these manifestations of global capitalism and capitalism’s contribution to climate change may serve to stimulate anti-capitalist resistance movements that are ready to take on the environmental crisis.

This possible scenario in the Global South ought to resonate with anti-capitalist activists in the North. The great need is for international solidarity. Author, editor, and eco-socialist John Bellamy Foster offers perspective in his recently published article in Monthly Review, titled “Ecology and the Future of History.” Excerpts follow:

The agent of revolution is increasingly a class that is not to be conceived in its usual sense as a purely economic force but as an environmental (and cultural) force: an environmental proletariat… [and] Most of the major class struggles and revolutionary movements over the centuries of capitalist expansion have been animated in part by what could be called ecological imperatives—such as struggles over land, food and environmental conditions.

In general, Third World liberation movements have been aimed at both the environment and economy and have been struggles in which peasants and Indigenous peoples have played central roles, together with nascent proletarian and petty bourgeois forces… [and] All material struggles are now environmental-class as well as economic-class struggles, with the separation between the two fading.

The objective consequence of the changing social and ecological environment, the product of uncontrolled capitalist globalization and accumulation, arising from forces at the center of the system, is inevitably to create a more globally interconnected revolutionary struggle: a new eco-revolutionary wave emanating primarily from the Global South.