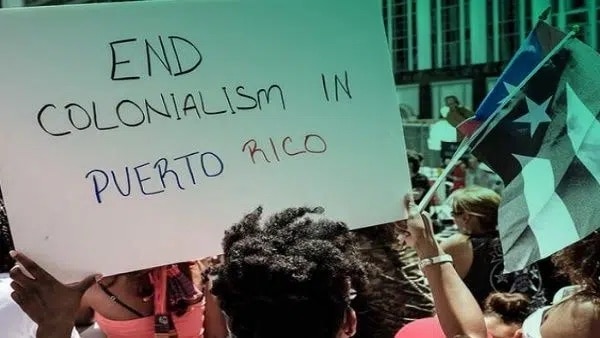 Protesters in Puerto Rico raise a banner demanding an end to US colonization of the island. Photo: Progressive International.

For the first time in its history, the people of Puerto Rico are seeing the total collapse of the island’s colonial administration, mainly due to the open corruption of the two traditional parties, both of which promote integration into the United States and/or the permanence of the colonial regime.

At the moment, all basic public services such as health, education, housing, and security are practically dismantled, impoverishing the majority of the population, despite the funds allocated by the US authorities. Public funds are diverted to fraudulent corporations, controlled by members of the corrupt political parties and their families.

It is estimated that more than $10 billion have been looted during the last decade alone by officials and business people linked to the New Progressive Party (PNP) and the Popular Democratic Party (PPD), bombastic names that try to disguise submission of power to the US in exchange for financial benefits.

Both PNP and PPD leaderships are neoliberal and intermediaries of big US capital, specialized in the culture of public corruption that has put more than 400 people in jail in the last decade. In fact, two former governors have already been accused by the US courts in Puerto Rico, since the local judicial authorities look the other way.

Due to this atavistic robbery, in 2016, former US President Barack Obama imposed, in a dictatorial manner, a “fiscal oversight” board that controls the government’s finances to guarantee payment with exorbitant interest to the powerful Wall Street bondholders. Hence, that odious debt is privileged above all the essential services for the people, which has led to the current collapse of the colonial administration.

This situation led to the closure of half of our public schools, the most essential educational service for our children and youth. The same was done with public health, which had already been partially privatized. Likewise, in the case of the public university, 50% of its budget was cut, which has caused massive emigration of the social group that represents the best knowledge, talent and hope that the country has.

Historically, nearly six million Puerto Ricans have been forced to leave their nation to seek better living conditions, and there are just under three million left in the Puerto Rican archipelago. The objective of the empire is to displace the Puerto Rican community by billionaire Americans, who little by little have been buying our best lands and facilities.

As a result of this serious political, economic and social crisis, crime has skyrocketed to levels never seen before, with daily murders by armed drug gangs. These thugs roam openly and commit crimes in broad daylight. In truth, the people of Puerto Rico are in the midst of a civil war among groups of drug traffickers who have no respect for the value of life.

Given this whole alarming situation, the credibility of the PNP-PPD leadership is in free fall, and broad sectors of workers have taken to the streets daily to protest and propose solutions. For this reason, the two colonial parties historically supported by the USA lost almost half of their voters in 2016 and 2020.

Everyday there is more awareness in Puerto Rico of the need to unite all the political and social movements in struggle, including the Puerto Rican Independence Party (PIP) and the Citizens’ Victory Movement (MVC), which since 2020 has become the third largest political force in the country and the second in the capital of San Juan.

Currently, a legal offensive and street mobilizations are being planned to repeal the ban on electoral alliances, which was opportunistically approved by the PNP-PPD shortly before the 2020 elections. For the first time, a left-wing electoral front could defeat the PNP-PPD, the two parties which, with the backing of the USA, have taken turns in administration for decades.

Despite all the adverse circumstances, the people of Puerto Rico are in resistance. Just as we defeated the attempts to culturally assimilate us and the constant persecution of our independence movement, we will have to take advantage of this collapse of the colonial government to advance towards decolonization and social justice.