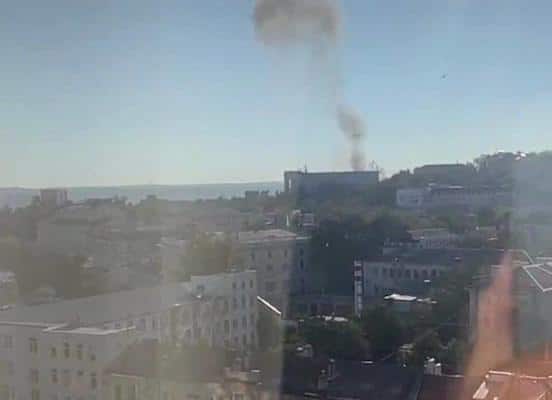 An UAV hit the roof of the headquarters of Russia’s Black Sea Fleet, Sevastopol, Crimea, August 20, 2022

In military terms, the crude, locally assembled drone dropping a country-made bomb or two on unguarded sites in Crimea are at best pin pricks in the big picture of Russia’s special military operation in Ukraine. But it can be profoundly consequential in certain other ways.

For a start, this escalation has Washington’s approval. A senior Biden  administration official told NatSec Daily the U.S. supports strikes on Crimea if Kiev deems them necessary. “We don’t select targets, of course, and everything we’ve provided is for self-defence purposes. Any target they choose to pursue on sovereign Ukrainian soil is by definition self defense,” this person said.

But Washington knows–and Moscow knows–that like any sophistry, this one too is a clever argument but inherently fallacious and deceptive. The New York Times has interpreted the drone attack on Crimea as a challenge to the leadership of President Vladimir Putin. The Times wrote that the Crimea attacks “put domestic political pressure on the Kremlin, with criticism and debate about the war increasingly being unleashed on social media and underscoring that even what the Russian government considers to be Russian territory is not safe.”

Times claimed that “as images of antiaircraft fire streaking through the blue Crimean sky ricocheted through social media, the visceral reality of war was becoming more and more apparent to Russians–many of whom have rallied behind the Kremlin’s line, hammered home in state media, that the “special military operation” to save Ukraine from Nazi domination is going smoothly and according to plan.”

The paper quoted a prominent establishment think tanker in Moscow acknowledging that the Crimean attack is a “serious” development insofar as “People are beginning to feel that the war is coming to them.” The Ukrainian president Volodymyr Zelensky claimed in a nationwide address on Saturday, “One can literally feel in the air of Crimea that the occupation there is temporary, and Ukraine is returning.”

Once again, while Russia is steadily winning the ground war in Ukraine, the U.S. is determined not to lose the information war. In Washington’s reckoning, in this Internet Age, the war is to be ultimately won in the Russian people’s minds. Therefore, this studied escalation by Washington puts Moscow in a dilemma, since if it is unanswered, Zelensky may target the 19-km long Crimean Bridge connecting the Taman Peninsula of Krasnodar in mainland Russia with the Kerch Peninsula of Crimea.

In fact, it is a near certainty. The point is, the Kerch bridge is “Putin’s bridge” in the Russian people’s consciousness. While formally opening the bridge to car traffic in May 2018, Putin was quoted as telling the workers, “In different historical epochs, even under the tsar priests, people dreamed of building this bridge. Then they returned to this in the 1930s, the 40s, the 50s. And finally, thanks to your work and your talent, the miracle has happened.”

Therefore, there is no better way to puncture the halo around Putin than by despatching at least a bit of the Kerch bridge to the bottom of the Black Sea. Meanwhile, from the U.S. perspective, Kiev’s drone attacks on Crimea already serve three purposes.

First, this is meant to be a blow to the Russian morale. Indeed, Putin’s towering popularity within Russia has become an eyesore for the Biden Administration. Putin’s masterly navigation of the Russian economy out of crisis mode is an incredible feat that defied all logic of power in the American calculus–inflation is steadily falling (in contrast with the European countries and the U.S.); the GDP decline is narrowing; foreign reserves are swelling; the current account is on the plus side; and lo and behold, the Biden Administration’s so-called “nuclear option”–Russia’s removal from the SWIFT messaging system–failed to cripple foreign trade.

Second, both Washington and Kiev are desperately scrambling for “success” stories to distract attention. The Times playing up the story speaks for itself. In reality, Russia’s Donbass offensive has created a new momentum and is steadily grinding the Ukrainian forces. Within the week, Russian forces will have encircled the lynchpin of the Ukrainian defence line, Bakhmut city, which is a communication hub for troop movements and supply logistics in Donbass. Russian forces have reached the city outskirts from the north, east and south. The fall of Bakhmut will be a crushing defeat for Zelensky.

On the other hand, even after two months after Zelensky promised a “counteroffensive” on Kherson near Crimea, it is nowhere in sight. Even his most ardent votaries in the western media feel let down. To be sure, there is growing disenchantment in Europe.

The Hungarian PM Viktor Orban, undoubtedly the smartest European politician today (with an economy registering over 6% growth when the rest of the continent is mired in recession), told German magazine Tichys Einblick in an interview last week that this war marked the end of “western superiority.” Interestingly, he named Big Oil as “war profiteers” and singled out that Exxon doubled its profits, Chevron quadrupled, and ConocoPhillips’ profits have shot up manifold. (Of course, all three are American companies.) Orban’s message was clear: America has weakened the EU. This thought must be troubling many a European politician today.

Third, Washington has thrown down the gauntlet in a measured way. But there is no way the war can be brought into the drawing rooms of the average Americans the way Times says is happening in Russia. Twenty Americans were killed in Kharkiv two days ago in a high-precision Russian missile strike, but there aren’t going to be any body bags returning to Arlington Cemetery; nor does it make headline in the cooperative American media.

The U.S. plans to go further up on the escalation ladder. Escalation is the Biden Administration’s last chance to stall a Russian victory. The American strategic thinker and academic John Mearsheimer has written that the risk of a disastrous escalation is “substantially greater than the conventional wisdom holds. And given that the consequences of escalation could include a major war in Europe and possibly even nuclear annihilation, there is good reason for extra concern.”

Moscow’s preference is to avoid any escalation, since the special military operation is achieving results. Whereas, it is the U.S. that is in some visible despair, and in immediate terms, Russia’s plans to hold referendums in Kherson and Zaporozhye in September must be stalled. Herein lies the danger.

The U.S.’ current build-up over Zaporozhye Nuclear Power Plant points toward a hidden agenda to intervene in the war at some point directly. Kiev’s attempt to arrange a nuclear explosion in Zaporozhye can only be seen in this light. Moscow seems to anticipate such an eventuality.

Defence Minister Sergey Shoigu disclosed yesterday that Russia has begun mass production of Tsirkon hypersonic cruise missiles and is already deploying them. The U.S. lacks the capability to counter Tsirkon, which is estimated to be 11 times faster than Tomahawk with far superior target-penetration characteristics. Shoigu may have given a stark warning that Russia will not be cowed down if there’s a NATO intervention in Ukraine.