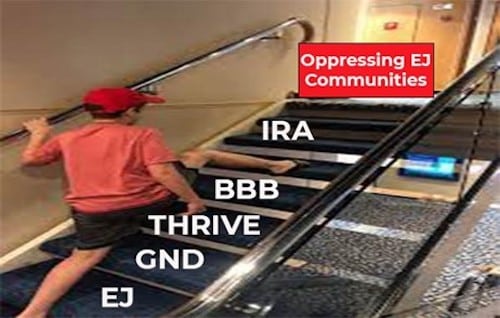 The brother El Hajj Malik El Shabazz (aka Malcolm X) once explained, “If you’re not careful, the newspapers will have you hating the people who are being oppressed and loving the people who are doing the oppressing.” The tale of two narratives associated with the recent signing into law of the so-called Inflation Reduction Act (IRA) accentuates his words at a critical moment. Communities on the frontlines of the climate crisis find themselves entrapped in a cycle of climate cataclysms and cumulative pollution derived from legacy and systemic environmental racism and classism.

This, to me, is a fair inquiry. If a Republican introduced a piece of legislation that included opening up 600 million acres of oil and gas leasing in the Gulf of Mexico, dedicated billions of dollars to unproven “false climate solutions” like so called carbon capture and sequestration, extended the life of aging nuclear power plants, allowed for increased mining of uranium, and tied it to a commitment to ratify a separate, rubber stamped American Petroleum Institute (API) side deal that would deregulate landmark environmental laws like the National Environmental Policy Act, as well as the Clean Water Act, which have both acted as vanguards for historically marginalized environmental justice communities, would we still refer to it as a “historic climate bill?” One would hope that the answer would be emphatically, “Hell no!”

So, the question then becomes, why are historically white-led environmental groups, commonly referred to as “Big Green,” as well as far too many anointed climate “thought leaders,” renowned climate writers, and liberal media outlets assigning terms to the IRA such as “climate bill,” and “a win for environmental justice?” Is it because the Democrats, the party that gave us the “Crime Bill,” a racist “New Deal” and, a virtually non-existent Voting Rights Act, and rammed it through a unilateral reconciliation process, are the ones who introduced it? I would argue that doing so even partly for this reason is both a contradiction and bereft of veracity–and, apparently, so do leading environmental and climate justice organizations including the Climate Justice Alliance, Indigenous Environmental Network, and allied youth movements like the Powershift Network, who recently sent an email to their members with the subject line, The Inflation Reduction Act is an Assault on Black and Brown Communities,” which stipulates,

No solution is a solution if Black and Indigenous nations in the Gulf South have to suffer in order to have bandaid solutions for the wider public.

Making matters worse are Big Green groups, celebrated climate “thought leaders, and certain climate policy “experts” who clearly know they can’t sell the IRA, which is why they’ve elected to pad it with questionable data–from the amount of greenhouse gas emissions reduced, to the amount of money that would be invested in environmental justice communities. Big Green and its acolytes/sycophants continue to cause great harm to the frontlines with their tweets, putrid prognostications, and media appearances that further lacerate already gaping wounds engendered by years of classism, elitism, paternalism, and conscious/unconscious as well as intentional/unintentional racism. This behavior is what recently led me to resign from the Advisory Board of one of these national Big Green organizations.

We must be clear – Big Green, the Democrats, and their operatives are exercising a sanctimonious variety of greenwashing and climate denialism so long as they continue pilfering the IRA as a climate bill.

Thankfully, there are those more interested in exercising journalistic integrity than conforming to false narratives and, in some cases, downright fabrications associated with the IRA. And, these journalists like Zack Coleman, Sarah Kaplan, and Nina Lakhani live up to ensuring that those most impacted by the climate crisis and the harmful provisions of the IRA, are those most showcased in the narrative.

These pieces include powerful statements from environmental and climate justice leaders like Maria Lopez-Nunez who offered, “Somehow, we’re both a bargaining chip and the people that can save the day when it comes to elections. Those are moral contradictions that can’t stand for too long. Something’s got to give,” Dallas Goldtooth, who declared, “We’ve been sold out for this vague notion of ‘compromise,” Rhianna Gunn-Wright, who reflected, “What was so painful for a lot of people, including me, was seeing the one-note celebration of this ‘historic’ bill,” and Colette Pinchon Battle, who reminds us,

Once again, the only climate proposal on the table requires that the communities of the Gulf south bear the disproportionate cost of national interests bending a knee to dirty energy–furthering the debt this country owes to the South.

It’s articles by these journalists that have perhaps forced Big Green to, yet again, enter a season of introspection and declare that they commit to working with climate and environmental justice groups to defeat the Schumer/Manchin API side deal and separate it from any piece of legislation that’s required to keep the government open after September 30, 2022.

Big Green is on notice, the one-off, performative press statements declaring solidarity will no longer be accepted as active collaboration. They must put their money where their mouths are by redistributing their wealth and power to Black, Indigenous, and poor white grassroots movements as part of the praxis of climate justice. In this moment, when there appears to be agreement on what the immediate task at hand is–interdiction and deracination of the so-called Schumer/Manchin API side deal–Big Green groups must allocate their money and deliver unfettered access to funders/foundations, as well as lawmakers to grassroots, climate/environmental justice organizations accountable to frontline communities from the Gulf South, to Appalachia, the Bronx and Brooklyn, the Arctic, and throughout Indian Country.

Access, power, and capital can no longer be in the hands of the few–Big Green and the climate community must stop replicating the same capitalist, extractive and iniquitous economic conditions and toxic power structures that contribute to the knot of climate catastrophe we find ourselves tied in. In short, if Big Green and the Democratic party don’t learn, we’re all going to burn in an inferno of social disjunction. And this moment may be their last chance to demonstrate they get it and rescue themselves from a nadir of distrust that currently exists between them and far too many climate/environmental justice organizations and the communities they are accountable to.

Anthony Karefa Rogers-Wright is a national racial and climate justice advocate. He is a proud member of the Black Alliance for Peace (BAP) and is blessed to be the father of his seven-year-old son, Zahir Cielo.