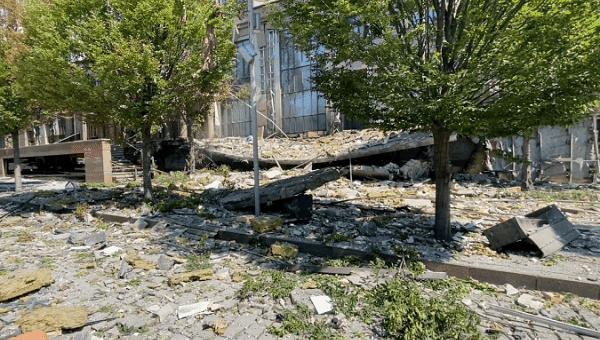 “Good morning Donetsk”, like the TV morning shows, is the joke among the few foreign correspondents who remain here: good morning, good afternoon, and good night with a cannon fire.

The urban area of Donetsk is one of the places most harassed by Ukrainian artillery in the Donbass: with rumblings we wake up and go to bed at night. With rumblings we enjoy a coffee or a beer, or a stroll through the city’s many parks and its beautiful artificial lakes, all from the Soviet era. It is with rumblings that I write these lines. At any given time the rumble can fall on your head.

In each of those rumbles there is a house, a building, a market destroyed, people wounded or killed. Always civilians. This happens daily since 2014 in the whole periphery of the city, and now it includes the center, where the state institutions, many schools, universities, hospitals, shopping malls, hotels are located.

On average, every day about 300 shells of shells, rockets and missiles are discharged on Donetsk and its surroundings. There are Telegram accounts that report within minutes each attack, specifying destination, origin, caliber and consequences.

Ukrainian gunners are precise. In the periphery they destroy buildings every day, but in the center this rarely happens, except for two schools and the central administrative building.

The shells always fall close by the supposed target. Near the Theater, the main hotels, the Parliament, the restaurants and cafes, the Government House. They break windows, kill or wound one or another of the few passers-by, and keep their message alive: we can hit wherever we want and at whatever time we want.

Ukraine’s darling targets are basic services: water, electricity, communications. This is punishment of the civilian population. They rarely hit military targets. If they did, it would be easier for Russian forces and Donetsk militias to locate the source of the fire and destroy it. Much of the fire comes from nearby urban, populated areas, such as Avdeevka or Maryinka, which serve as human shields.

In Donetsk, on the other hand, there are no artillery or combat posts in residences or schools. In fact, they are nowhere to be seen, and when fire is heard, mainly from the Grad multiple rocket launchers mounted on trucks, it is from the surrounding rural areas.

100,000 Czechs protest their government’s support of the NATO proxy war in Ukraine and the controlled demolition of Europe’s economy.

We all know that the fire is coming from the west. Hence cars are preferably parked on the eastern side of buildings. It is also safer to walk on that side. A Russian journalist told me that in St. Petersburg (Leningrad) there are still street signs, from the time of the Patriotic War, about the safest side of the street, opposite to the direction of the German fire.

On Sept 2, at about 7 p.m., five shells fell in the middle of the city center. The noise is enormous and one knows where to go to report. I walk just two blocks and find an old woman dead in front of the Parliament, her daughter in despair. Two craters on the main avenue of the city, which is flanked by rose gardens; Donetsk prides itself on being “the city of roses”.

I make a quick “standup” and send it to the channel via Telegram, with the images of the destruction and the covered body of the victim.

We walk two more blocks and reach the tree-lined and well-maintained Pushkin Boulevard, an area of restaurants and cafes. Two more craters around the Drama Theater. The fifth impact was on top of a tall building. Emergency services arrive, military specialists, repair of the trolley wir

es begins immediately, and I watch with delight (if that is possible) two girls smoking relaxed on the porch of a restaurant, about 20 meters away.

Another “standup”, images of the broken glass of the theater, of the shrapnel splinters scattered everywhere. Another dispatch to the channel, end of the day, for now.

We go to another restaurant nearby, called Happy Life, popular among journalists, and drink a beer to comment. It’s a terrace facing the Boulevard. It is half-busy, there are several soldiers with their girlfriends or wives, chatting, laughing.

Life goes on, and one thinks that people like this are unbeatable, but there are signs that patience is running out.

WHY DOESN’T RUSSIA JUST GET IT OVER WITH?

We regularly travel through semi-isolated or neglected areas of the Donetsk and Lugansk People’s Republics. These are small, newly liberated communities that have not yet been reached by organized and systematic humanitarian assistance.

People who have nothing, and cannot go anywhere, and to whom we bring modest food and water aid in a Uaz (“Bukhanka”) van purchased by Russian journalist Nikita Tretyakov for that purpose only.

The aid is funded by private contributions from users of his Regnum news agency. The project has been going on for three months and we have so far made 18 trips, often through mined areas and/or under constant attack.

We are almost always guided by militia soldiers we meet, who know the terrain well, to avoid the mines left there by the Ukrainians. Often, these soldiers ride their own cars.

On the way, we do journalistic work. We talk to regular people, almost never to officials. They tell us that they have often been able to survive because Russian soldiers and militiamen share their food and water rations with them. This single fact alone, repeated, marks a remarkable difference with the behavior of the Nazi battalions and Ukrainian troops.

There is gratitude, but also sorrow. They have lost a lot, and they have an urgency to rebuild their lives. The question that keeps repeating itself more and more is, “Why doesn’t Russia just get it over with?”

This same question becomes even more urgent in the Zhaporozhye region, where Europe’s largest nuclear power plant, built by the Soviet Union in the 1980s, is located, and which has been under constant Ukrainian attacks, and even attempts to seize it by surprise, for the past three weeks.

The claims of Ukraine’s President Volodymir Zelenski that the Russians are bombing themselves and killing their own people to blame Kiev, are laugh stock everywhere.

The scale of this conflict is small, if you want. Russia has committed no more than 150,000 professional soldiers, who are slowly defeating a numerically far superior force. Moscow has not yet used its immense military power.

We chart the rise in prices: pic.twitter.com/KlJKl8NgmC

To measure the scale, it is useful to go back to August-September 1943, when the same area of Zaporozhye was the scene of the battle for the Dnieper River, between advancing Soviets and retreating Nazi-German invaders. The front stretched for 1,300 kilometers. Four million soldiers took part in the battle and about 400,000 were killed in less than a month of fighting.

“Four missiles to the Rada (Parliament) and banks in Kiev and this is over,” a resident of Pervomaisk (May Day) in Lugansk PR told me, after an unusual attack on a residential building—a NATO Himars rocket- destroyed nine floors in one hit.

Donetsk military spokesman Eduard Basurin admits that the new 155 mm howitzers and Himars multiple rocket launchers present a problem that has no tactical solution: they are highly mobile, are fired from far distances and are very difficult to locate. That is why, he said, the response is concentrated in ammunition depots and military bases.

For Denis Pushilin, the head of the Donetsk PR government, the dilemma of new NATO armaments in Ukrainian hands raises the need to expand the republic’s security zone to at least 70 or even 130 kilometers from the borders. That is, close to Kiev.

Moscow assures that everything is going according to its plan, and that all its objectives will be achieved, either by negotiations or by force: denazification, demilitarization and neutrality of Ukraine. For Russia, this is a limited “special military operation”, not an all-out war, which would involve the mobilization of reserves and a frontal attack on the entire Ukrainian territory.

So much so, that in the course of the Operation, the Russian Defense Ministry has organized international military games and an international conference on security and defense, and wide-ranging combined maneuvers are currently taking place in the Far East, with the participation of several countries, including China.

Russia releases this television advertisement wishing Europe ‘GOOD LUCK THIS WINTER’, as it shuts off Europe’s gas supply in response to their government’s ridiculous sanctions. pic.twitter.com/JsI2tWCuGG

The apparent ease with which Ukrainian artillery strikes are apparently intended to create the media impression that they have succeeded in stopping the Russian advance, that they are regaining territory, and that they have the strategic initiative.

Such was the conviction of a group of Western journalists who came to the area in recent days to join a Russian Defense Ministry tour of the Donbass and Zaporozhye.

On the battlefield, however, counter-offensive attempts have failed, including two commando raids across a lake to seize by surprise the Nuclear Power Plant, coinciding with the visit of an investigative commission of the International Atomic Energy Agency (IAEA), chaired by the Argentine Rafael Grossi.

Ukraine inherited from the USSR a powerful industry, as well as advanced technology and science, but today it is a country impoverished by 30 years of neglect, looting, corruption and deindustrialization. It is visible when one travels through the territories now controlled by Russia.

The country is entirely dependent on the West to pay wages and salaries, and to maintain the war. In the last six months it has received—as loans and sales—assistance similar to Russia’s entire annual military budget.

However, all geopolitical considerations are of no importance today for ordinary citizens living under the scourge of artillery. The first secretary of the Donetsk Communist Party, Boris Litvinov, is of the opinion that Russia should increase the force of the attack and direct its strategy to where the decisions are made—Kiev.

For Litvinov, Ukraine has shown that it is a state that does not justify its existence, and must be dismantled as soon as possible. Many around here agree with him.