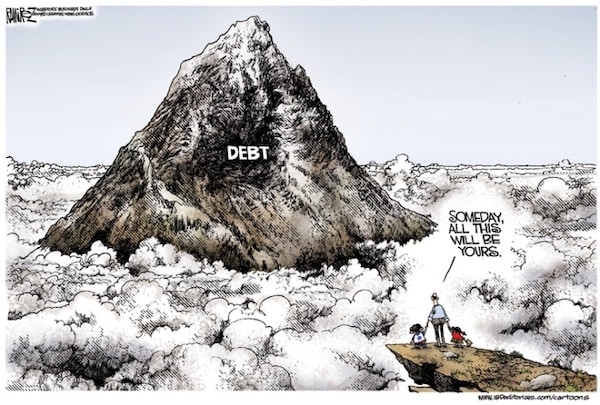 Almost 60% of the poorest countries were already in, or at high risk of debt distress, even before the Ukraine crisis. Debt service burdens in middle-income countries have reached 30-year highs, as interest rates rise with food, fertilizer and fuel prices.

Lenders in international capital markets charge developing countries much higher interest rates, ostensibly for greater risk. But changes in public-private debt composition and associated costs have made such debt riskier.

Private short-term debt’s share rose from 16% of total external debt in 2000 to 26% in 2020. Meanwhile, international capital markets’ share of public external debt rose from 43% to 62%. Also, much corporate debt, especially of state-owned enterprises, is government-guaranteed.

Meanwhile, unguaranteed private debt now exceeds public debt. Although private debt may not be government-guaranteed, states often have to take them on in case of default. Hence, such debt needs to be seen as potential contingent government liabilities.

Private borrowings for less than ten years were 60% of Lankan debt in April 2021. The average interest rate on commercial loans in January 2022 was 6.6%—more than double the Chinese rate. In 2021, Lankan interest payments alone came to 95.4% of its declining government revenue!

Commercial debt—mostly Eurobonds—made up 30% of all African external borrowings with debt to China at 17%. Zambian commercial debt rose from 1.6% of foreign borrowings in 2010 to 30% in 2018; 57% of Ghana’s foreign debt payments went to private lenders, with Eurobonds getting 60% of Nigeria’s and over 40% of Kenya’s.

Various factors have made things worse. First, most rich countries have failed to make their promised annual aid disbursements of 0.7% of their gross national income, made more than half a century ago.

Worse, actual disbursements have actually declined from 0.54% in 1961 to 0.33% in recent years. Only five nations have consistently met their 0.7% promise. In the five decades since promising, rich economies have failed to deliver $5.7tn in aid!

Second, the World Bank and donors have promoted private finance, urging ‘public-private partnerships’ and ‘blended finance’ in “From billions to trillions: converting billions of official assistance to trillions in total financing”.

Sustainable development outcomes of such private financing—especially in promoting poverty reduction, equity and health—have been mixed at best. But private finance has nonetheless imposed heavy burdens on government budgets.

Third, since the GFC, developed economies have resorted to unconventional monetary policies—‘quantitative easing’, with very low or even negative real interest rates. With access to cheap funds, managers seeking higher returns invested lucratively in emerging markets before the recent turnaround.

Credit rating agencies often assess developing countries unfavourably, raising their borrowing costs. Quick to downgrade emerging markets, they make it costlier to get financing, even if economic fundamentals are sound.

The absence of orderly and fair debt restructuring mechanisms has not helped. Commercial lenders charge higher interest rates, ostensibly for default risks. But then, they refuse to refinance, restructure or provide relief, regardless of the cause of default.

When will we learn?

In the past, the IMF and World Bank imposed ‘one-size-fits-all’ ‘stabilization’ and ‘structural adjustment’ measures, impairing development. Developing countries had to implement severe austerity measures, liberalization and privatization. As real incomes declined, progress was set back.

Debt-distressed countries once again seek support from the Washington-based lenders of last resort. But without enough debt relief, a temporary liquidity crisis threatens to become a debt sustainability, and hence, a solvency crisis, as in the 1980s.